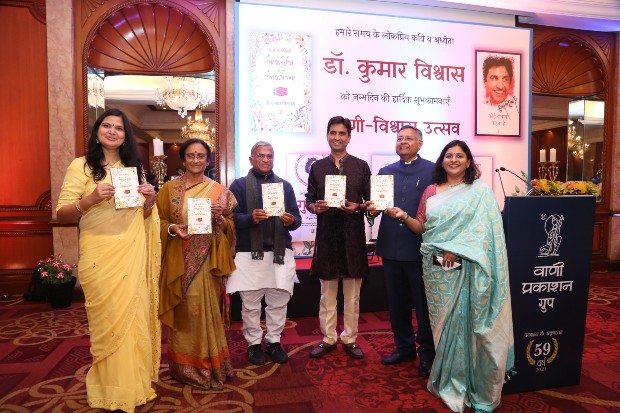 INR 1 Cr book deal for Koi Deewana Kehta Hai, slated to be the biggest single book deal in the history of Hindi publishing.

New Delhi: Vani Prakashan Group, now in its 59th year, has emerged as a catalyst in the socio-political change of the Hindi heartland through its meaningful publications. The publishing house feels proud and pleased to announce its association with poet, academician, motivator, social activist and youth icon Dr. Kumar Vishwas with 5 new books Brij va Kauravi Lok Geeton Mein Lok Chetna (PhD thesis of Dr. Vishwas), Koi Deewana Kehta Hai (iconic poetry collection of Dr. Vishwas), Preface by Dr. Vishwas to three shayari collections of world famous poet Jaun Eliya – Lekin, Gumaan and Yani. To celebrate this association, Vani Prakashan Group celebrates Dr. Vishwas’s 51st birthday with aplomb at the ‘Diwan-I-Am’ of Hotel Taj Man Singh, New Delhi. On this occasion, Arun Maheshwari, Chairman and Managing Director of Vani Prakashan said , “We want to bring to our readers Dr. Kumar Vishwas’s serious intellectual works along with creative ones as a new experience in a unique style of Vani Prakashan Group. We welcome the global ambassador of Hindi Dr. Vishwas to the house of Vani on his birthday. With these new announcements, we want to send out a message to the Hindi heartland, young writers and readers that perseverance and hard work backed by in-depth understanding of Hindi literature can open global watershed opportunities for them. As a society, we must acknowledge and appreciate the iconic life and literary journey of Dr. Vishwas. We are hopeful that his works will invoke global interest and will be translated into international languages in coming years.”

Dr. Vishwas began his journey as a lecturer after receiving PhD on the folk songs of India and earned his reputation as a poet in the early 2000 with his multi-million copies bestseller book ‘Koi Deewana Kehta Hai’. He later joined journalism and engaged with political activism. He is now producing path breaking shows for television and OTT platforms dedicated to the rich poetry and multi-lingual diversity of India, and continues to be a sensation for the youth on social media. Late Dr. Dharmveer Bharti, who has been revered as a prolific Hindi editor, writer and storyteller for multiple generations, has called Dr. Vishwas the poet of his generation. His words stand true as we witness Dr. Vishwas becoming the first ever Hindi poet to make it to ‘50 under 50’ celebrity list of the India Today Group. Dr. Kumar Vishwas addressed the youth of the country on his birthday and said, “I thank my readers who are with me through Vani Prakashan Group for their long lasting relationship with my poetry. It is through your faith in me that I derive my inspiration to think, write and create better. As the scriptures say, santushta dvija nashta, asantushta ch maheepati. I will remain a step away from being completely satisfied for mild dissatisfaction is the force that drives us all towards the future.”

Vani Prakashan Group has also won the prestigious Distinguished Publisher Award instituted by The Federation of Indian Publishers in 2008. On its 51st anniversary, it laid the foundation for its not-for-profit arm Vani Foundation. Also, the publishing house won the National Award ‘Swarn Kamal’-2016 for Best Book on Cinema by the Hon. President (former) of India Dr. Pranab Mukherjee and Business Excellence Award by the Oxford Business College, Oxford, U.K. in 2016.