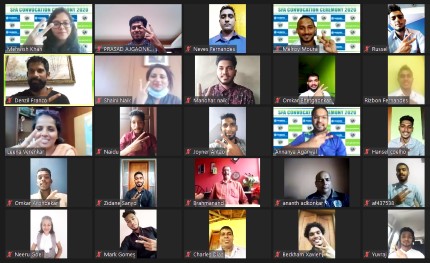 The event witnessed an active impressive line-up of core team members of SESA Football Academy and young sports enthusiasts cheering for the graduating students and wishing them for their future endeavors.

Sesa Football Academy was established in the year 1999 with an aim to identify, nurture, create platforms and build talent for Indian football. Till date, around 200 footballers have graduated from the academy. Apart from this, football initiatives undertaken by SFA have also positively impacted over 500 young players belonging to Goa and other cities of the country through various grassroot training programs. The residential academies provide systematic and robust football training through its team of national and international football experts, along with formal education of the trainees during the training period.

While congratulating the graduating batch, Mr. Annanya Agarwal, President, Sesa Football Academy said, “I am extremely happy and equally proud to see that we could produce another talented pool of 27 footballers, who will be next generation football icons of the nation. In line with our vision to contribute towards development of Indian football through robust grassroots training programs, we at SFA are taking significant steps in providing world class training to budding footballers to nurture their talent and groom them as professional footballers. I wish all our graduating players great success and a bright future.”

The SFA alumni have very good track records, making their mark in premier national football platforms including Indian national team, ISL teams and other prestigious football clubs across the country.

Mr Sauvick Mazumdar, CEO of Vedanta Sesa Goa Iron Ore Business said, “At Vedanta, community engagement is at the core of our business philosophy. Sesa Football Academy, developed on reclaimed Sanquelim mine with an aim to provide a training platform for Goan youths, has immensely contributed to Goan football & nation at large. Despite difficult business situations for past several years, Vedanta has continued with our flagship CSR initiatives, especially SFA, to ensure uninterrupted contribution towards development of Indian football. I congratulate all our graduating students and wish them a very bright & successful footballing career.”

Speaking on the occasion, Mr. Brahmanand Sankhwalkar, former Captain of Indian football team and Arjuna Awardee said, “SFA has been doing praiseworthy work for the football community in Goa and country at large. The academy is producing good football talent by grooming them through grassroot training programs. I am happy to see these young players get such amazing training opportunity at SFA which is helping them pursue their career in football”.

Former Indian Football team player and SESA Football Academy alumnus, Mr. Denzil Franco congratulated all players and said, “I take pride in being a part of SFA. Contribution of SFA towards honing skills of young and talented footballers of Goa is immensely commendable. I am confident that the students graduating today from SFA will achieve greater heights and bring laurels for the academy boosting its legacy further.”

SESA Football Academy also aims to raise the standard of women’s football in the country through Vedanta Women’s League, which is helping in development of women footballers by providing them a platform to showcase and hone their talent. Vedanta’s contribution in development of sports is recognised by FICCI, and was conferred “Best Organisation Contributing in Sports through CSR” at the FICCI India Sports Awards 2019.