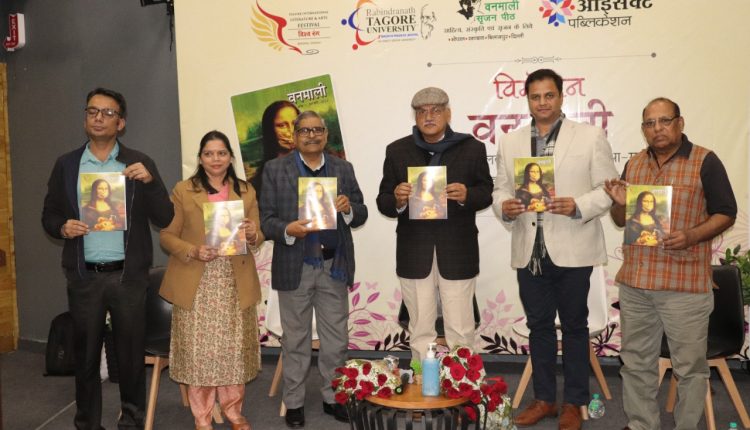 New Delhi– Shri Santosh Choubey- Director of Vishwarang and Chancellor of Rabindranath Tagore University launched a Hindi language magazine- ‘Vanmalli’. In an effort towards making a significant contribution and providing a global platform to broaden Hindi and Indian language fiction, the magazine will have an inclusive approach to democratic values and art, while being highlighted as a milestone event in the world of culture.

Vanmali Srijan Peeth has been appointed the editor of the magazine and Mr Mukesh Verma as Senior Writer. Talking of the launch they expressed that this magazine will provide an important platform to promote creative endeavours dedicated to the dignity of human values. Senior poet and critic Mr Jitendra Srivastava said that magazines are like a life force in the world of literature and culture. Vanmali magazine has a deep vision. Senior poet Mr Balram Gumasta said that “Vanmali” is a magazine dedicated to the memory of Vanmali Ji, an important figure in the world of Hindi literature. Senior poet and Editor of Vishwa Rang Patrika Liladhar Mandloi said that having a monthly magazine in the name of Vanmali Ji in itself is of significance and has made history in the literary world and since it involves the youth of the country, this is very critical from a future perspective.

Social Entrepreneur & Director, AISECT Group- Mr Siddharth Chaturvedi, expressed his views ” It is a proud moment for all of us that we have launched “Vanmali” magazine which is dedicated to the memory of Vanmali Ji. With this launch, we will ensure that every month this magazine is published with the same quality and this will significantly underpin innovation and creativity.”

Ms Divya Mathur, Senior NRI writer from London said that “Today when literature magazines are being closed down continuously, the launch of “Vanmali” magazine, will be underlined in golden letters on the global stage of literature.”

Young Storyteller from Bangalore Mr Chandan Pandey said that it is very important to publish “Vanmali” amid new challenges like online and web publishing of the present. Content is the king. It would be a big deal if we produce hundreds of writers with thousands of readers.