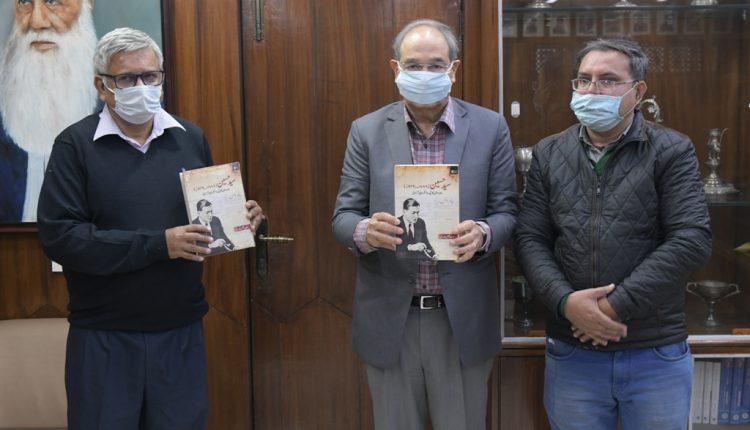 Aligarh : Not many people know that a leader of the Indian Freedom Movement, Aligarh Muslim University (AMU) alumnus, debonair statesman, scholar, writer and journalist lies buried in a solitary yet elegantly made marble tomb with epitaphs in Arabic and English at a cemetery in Cairo, Egypt.

Almost unsung figure, Syud Hossain who died in Cairo in Feb 1949 after serving as the first Indian ambassador to Egypt would have remained lost; but a carefully penned down biography of Hossain’ by Dr Asad Faisal (Research scholar, Department of Mass Communication) has brought the forgotten Freedom Movement hero alive in the present.

‘Syud Hossain: Hindustan ka Aik Danishwar Mujahid-e-Azadi’(Brown Books), a biography exploring how Hossain used both the lectern and the pen to devastating effect during the Indian Independence movement was today released by AMU Vice Chancellor, Prof Tariq Mansoor in a special function at the Vice Chancellor’s office.

“This biography is intended for the public eye and is an eye-opener on the virtually closed life of Syud Hossain. It has historical details and descriptions of the countries he visited and how he kept the torch of Indian nationalism flying in England and the US through writings and mesmerising oratory, detested by the British Raj”, said the Vice Chancellor, Prof Mansoor during the book release function.

He added: “I am sure that this book will soon have its English version. This book also has details of Hossain’s student life in AMU before he moved to London for higher education”.

Prof Shafey Kidwai (Department of Mass Communication) pointed out that ‘Syud Hossain: Hindustan ka Aik Danishwar Mujahid-e-Azadi’ details all important moments of Hossain’s life including how he turned bitterly against Mohammed Ali Jinnah and how he was left broken after Mahatma Gandhi’s assassination.

“Journalism remained Hossain’s passion. In this biographical account, I have tried to bring in light, Hossain’s articles on Freedom Movement and Indian nationalism which featured in ‘New Statesman’, ‘Contemporary Review’, ‘Pall Mall Gazette’, ‘Asiatic Quarterly’, ‘New Age’ and ‘Foreign Affairs’ among others. His trenchant editorials against the British regime were widely read by people like Gandhi and Motilal Nehru. He acquired such fame that within two years, Motilal Nehru invited him to Allahabad to take charge of his daily, ‘Independent’ and in a span of three months, Hossain turned it into one of the most widely read newspapers in the Country despite facing the wrath of the Imperial government”, said the author of the book, Dr Asad Faisal.

Dr Faisal has extended gratitude to Bangladesh based, Syud Iqbal Ahmed, nephew of Syud Hossain for providing rare photographs and intriguing rich material on Hossain’s life and for funding the book publication.