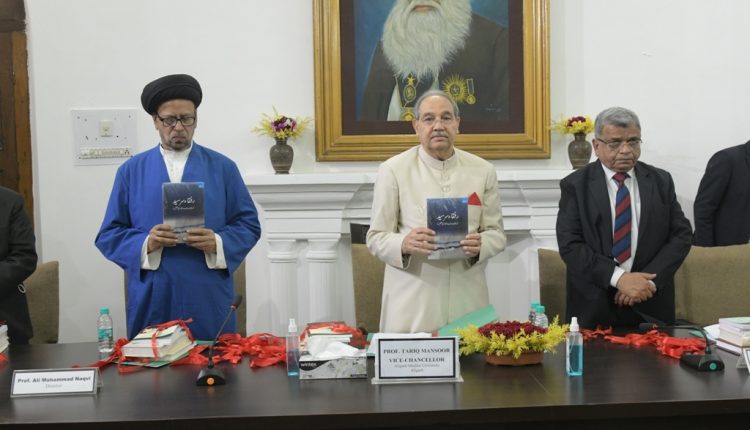 Aligarh : “Sir Syed Ahmad Khan had a multi-faceted personality and he should be assessed and judged in the light of the time and space he lived in”, said Prof Tariq Mansoor, Vice-Chancellor, Aligarh Muslim University (AMU) while delivering his presidential speech during the book release ceremony of the Sir Syed Academy, AMU.

Highlighting the dedication and invaluable contributions of the close companions of Sir Syed, Prof Mansoor said the history of Aligarh Movement could not be complete without mentioning the names of the likes of Nawab Vaqarul Mulk and Nawab Hafiz Ahmad Saeed Khan.

He stressed upon the need to translate the monographs published by Sir Syed Academy in other Indian languages like Hindi, Bengali, Malayalam etc, so that the message of Aligarh Movement could reach a larger audience.

Prof Mansoor expressed satisfaction over the digitization work, and conservation of the manuscripts and other rare documents being carried out by the Sir Syed Academy.

“I will continue extending full support to Sir Syed Academy which has published some very important books on Sir Syed and Aligarh Movement in the recent past”, added Prof Mansoor.

He highlighted the works being done by Sir Syed Academy and extended sincere thanks to Prof Tariq Mansoor, Vice Chancellor, AMU for supporting and reviving the Academy.

“Sir Syed was the first public intellectual of the 19th century and this book successfully starts a new discourse on understanding Sir Syed”, added Prof Kidwai.

Expressing his thoughts on Aawaz-e-Sir Syed, Prof Sagheer Afraheem said the collection of the articles of Prof Shan Mohammad is a significant contribution to Sir Syed studies.

Dr Mohammad Shahid proposed the vote of thanks.

The proceedings were conducted by Dr Syed Husain Haider.