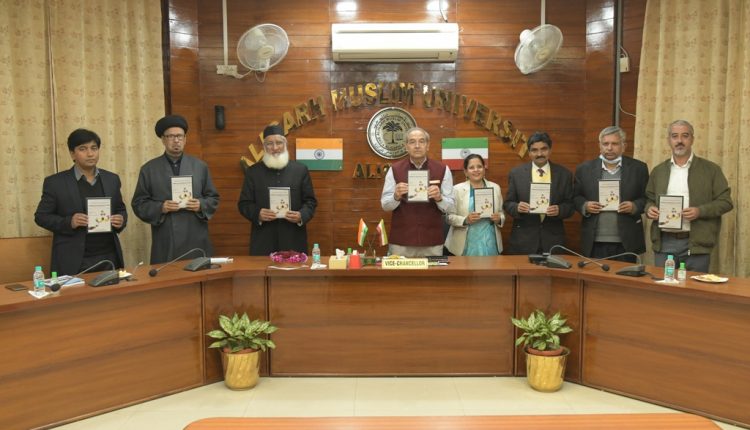 Vice-Chancellor Releases Journal of the Faculty of Arts

Speaking on the occasion Professor Tariq Masoor said, “I am extremely happy to release the ‘Special Shamsur Rahman Faruqi Number’ of the Journal of the Faculty of Arts. Shamsur Rahman Faruqi, a doyen of Urdu literature visited AMU on several occasions. The Journal is a befitting tribute to the great corpus of work he has left behind”.

The special Number carries articles on the works of prolific celebrated Urdu critic, poet, novelist and editor, Shamsur Rahman Faruqi who passed away in December 2020. It is an eclectic collection of critical articles touching that covers most of Faruqi’s critical and creative oeuvre.

Mohammad Asim Siddiqui in his article ‘Introducing the Faruqi Phenomenon’ dwells on Faruqi’s contributions in Urdu criticism which is often marked by his authoritative pronouncements on who is a greater poet or composer of Ghazal. Faruqi considered Ahmad Mushtaq and Nasir Kazmi greater poets of Ghazals than Firaq Gorakhpuri. Similarly, Faruqi claimed Mir to be a superior poet to Ghalib.

Prof Siddiqui affirms that ‘familiarity with Arabic and Persian tradition of poetry and criticism is surely the most important aspect’ of Faruqi’s criticism.

Anisur Rahman concentrated on Faruqi’s most important critical work Sher-e-Shor Angez. In this work, Rahman claims, Faruqi has shown through his rigorous scholarship how ‘meaning is embodied in sound and sound in meaning’ in Mir’s poetry.

Frances Pritchett discussed Faruqi’s contribution to Urdu literature and criticism. While all contributors are in praise of Faruqi’s genius, Qaiser Shameem in his article ‘Urdu ki Zaban’ disagrees with him on the history of Urdu language and early Urdu literary culture.

Faruqi’s modernist and postmodernist techniques of storytelling in his novella Kabz-e-Zama were discussed by Saravjit Mukerji and Shariq Khan.

Irfanullah Farooqi in his part anecdotal and part academic piece pays tribute to Faruqi for his invaluable contribution to Urdu literary.

Md. Sajidul Islam has written on Faruqi’s much admired novel, Kay Chand Thay Sar-e Asman (translated by Faruqi himself as ‘The Mirror of Beauty’). Islam dwells on Faruqi’s recreation of a dying precolonial culture with all the grandeur it embodied before it fell apart in the face of British colonial expansion.

A part of the Journal entitled ‘In Memoriams’ is dedicated to obituaries of some retired colleagues of the Department of English and some who passed away in the last two years.

The artistic ‘sheen’ in the cover representing Shamsur Rahman Faruqi, Shabkhoon and Sher-e-Shor Angez is designed by Waseem Mushtaq.