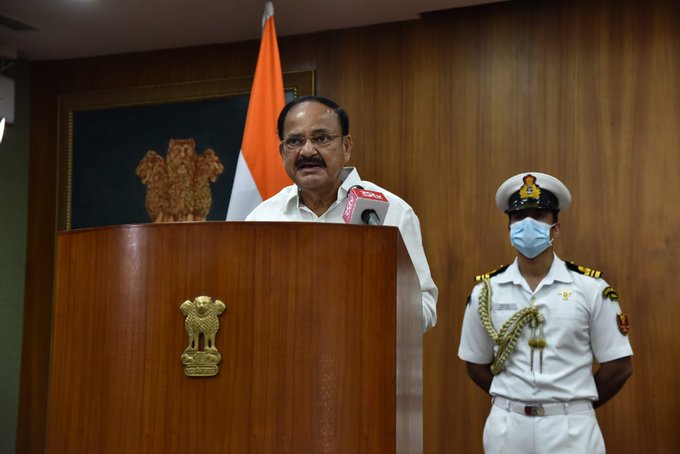 New Delhi: The Vice President, Shri M. Venkaiah Naidu today said that the pursuit of excellence must be an integral part of our education system and added that excellence should be ingrained in the culture of our educational institutions.

Shri Naidu underscored that the cultivation of excellence takes discipline, single-minded focus and determined effort, the Vice President said that at this critical juncture in our journey as a nation, excellence is imperative and mediocrity is no longer an option.

On the eve of the 127th Anniversary of Swami Vivekananda’s address at the Parliament of World’s Religions, Shri Naidu recalled that he had the good fortune of speaking at the Historic Art Institute of Chicago, the place where Swami Vivekananda delivered his legendary speech in 1893. He said that Swami Vivekananda told the world about the importance of the ancient Indian philosophy of Vedanta and the spirit of universality, tolerance and acceptance that underpins ancient Indian thought.

Stating that he had been a fond votary of Swamiji’s teachings since his college and university days, the Vice President said that Swamiji’s thoughts on religion, spirituality, nationalism, education, philosophy, social reform, poverty alleviation and empowerment of the masses inspired him greatly.

The Vice President opined that Swami Vivekananda understood the soul of the nation and the ethos of its culture and endeavoured to rebuild it on the noblest ideals that were enshrined in its spiritual foundations of Sanatana Dharma. “He worked tirelessly for national transformation through religious purification, spiritual emancipation and social regeneration”, he said.

Observing that Swamiji’s teachings remain eternal edicts to the whole world to this day, he urged youngsters to study the life and words of Swami Vivekananda and follow his message with heart and soul.He also opined that we need many more educational institutions that will take the universal teachings of giants like Swami Vivekananda and Sree Ramakrishna Pramahamsa and their interpretations closer to the common man.

Youngsters should understand the meaning of life and purpose of wealth is to serve the needy and underprivileged, he said.

The Vice President said that he saw an imminent need to re-imagine, reinvent and reengineer our entire education system, if we are to effectively meet the many formidable challenges of the 21st century. Reminding one and all of the demographic dividend that lay before India, he asserted that the nation must not fail to leverage this great competitive advantage.

The Vice President highlighted the need to foster innovation, encourage entrepreneurial ability and a deepen awareness of our country’s rich heritage. He said that education must result in the creation of an integrated person, a person who is empathetic, active, competent, humble and hardworking, a person who is open to new ideas, tolerant to different viewpoints and committed to world peace and collaborative, collective human progress.

Defining education as the relentless pursuit of truth and the constant endeavor to improve the human condition, Shri Naidu said that true education must empower our children to become responsible, concerned, engaged citizens, not only of India but of the world.

He opined that education must help our youth develop critical thinking faculties, clearly identify the problems that plague humanity and come up with definitive solutions. The Vice President said that education must also encourage our children to take great pride in our ancient cultural heritage and prepare them to be global ambassadors of our age-old values and morals. He also called for teaching the children in their mother tongue during the initial years of schooling.

Shri Naidu said that New Education Policy-2020 reflects the ideals of Swami Vivekananda. He expressed confidence that the Policy would facilitate India to fully realize the demographic dividend and make the country a knowledge and innovation hub in the 21st century.

Indian Missions under MEA to screen ‘Sri Aurobindo: The Beginning of Spiritual Journey’ this Independence Day

The TreeHouse chain distributes national flags among students in Maharashtra, Gujarat, and Rajasthan