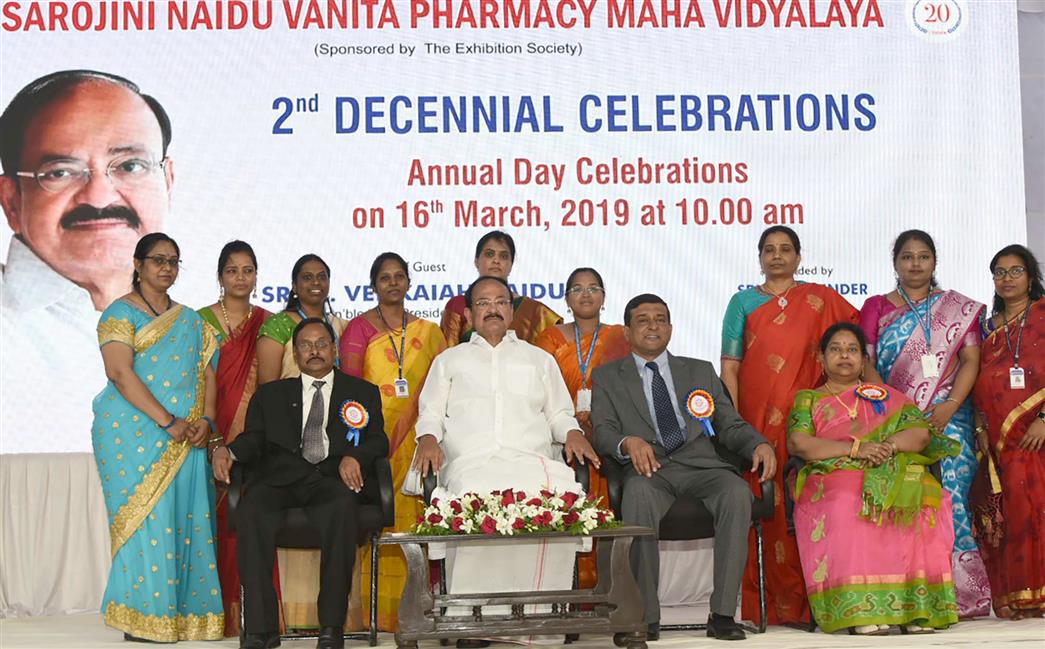 New Delhi: The Vice President of India, Shri M. Venkaiah Naidu has said that world class drugs with unwavering quality at very affordable prices is the need of hour. He urged the Indian Pharmaceutical industry to remain committed to high standards of quality in drug manufacturing and quality frameworks. Calling for strict adherence to global standards in manufacturing drugs, he exhorted the industry to earmark more resources for discovering new molecules and new drugs without compromising on the affordability of drugs.

Addressing the 2nd decennial celebrations of Sarojini Naidu Vanita Pharmacy Maha Vidyalaya, in Hyderabad today, Shri Naidu stressed the need to give a thrust to research and innovation. New healthcare challenges are emerging every day, especially with an alarming rise in the number of non communicable and lifestyle diseases and cancers, he added.

The Vice President said that India had become the largest provider of generic drugs globally and in supplying anti-retroviral drugs used worldwide to combat AIDS .

Expressing his desire to see India emerge as the world leader in generic medicines, Shri Naidu wanted the young researchers to also work towards standardizing and benchmarking Indian systems of medicine. He wanted them to use globally established experimental protocols, to establish the efficiency, validity and efficacy of the traditional medicines.

Shri Naidu asked the Pharma companies to develop new molecules and drugs to combat some of the lesser known diseases, particularly the group of diseases called as “rare diseases”.

Saying that the number of people suffering from rare diseases was estimated to be more than 70 million in India, the Vice President said that it was important for the Indian Pharma industry to look into the need for developing low-cost drugs for treating rare diseases.

The Vice President speedy introduction of generic drugs into the market should remain the focus. Rural health programmes, lifesaving drugs and preventive vaccines should also receive attention from policy makers and Pharma companies alike, he added.

Shri Naidu also called for revamping pharmacy education in India and to bring it on par with global standards for providing a better tomorrow to our youngsters.

Saying that Pharma industry has been posting a robust growth over the last few years, the Vice President said that the industry was projected to grow to US $55 Billion by 2020. He called up on the industry, governments at state and centre to utilize the industry’s growth potential to create job opportunities for youth.

Shri Naidu opined that the Pharmaceutical sector has the crucial responsibility of saving human lives and Pharma companies must go above and beyond their CSR mandates to provide life saving and other essential drugs to those who cannot afford them.

The Vice President complimented the Exhibition Society which is doing great service in the field of education by establishing 18 educational institutions starting from school to post graduate to professional courses with special emphasis on girls education for past 75 years in Telangana with an enrollment of 30,000 students. He also presented Gold Medals to 10 meritorious students.

“I am pleased to be here for the second decennial celebrations of Sarojini Naidu Vanita Pharmacy Maha Vidyalaya.

At the outset, I would like to compliment the Exhibition Society for promoting girls’ education through an array of 18 educational institutions located across Telangana with an enrollment of 30,000 students. From primary and secondary education to post-graduation, these institutions are imparting education in diverse disciplines like life sciences, humanities, pharmacy and commerce.

India has undertaken a long and arduous, yet rewarding journey in Pharmacology, from the “Charak Samhita” of traditional Indian medicine system, to becoming the third largest drug manufacturer in the world, in terms of volume, in the field of modern medicine.

From the ancient times India had a very systematic, scientific and rational approach to the treatment of diseases. The Atharva veda is a treasure trove of knowledge and wisdom in the field of medicine. It is lauded as the earliest source of medical information in India. Ayurveda has been regarded as an upaveda or a subtext of the Atharvaveda.

The mantras in the ancient texts contain a wealth of information regarding herbs, metals, medicines, diseases and treatments. They speak of the astounding properties and powers that herbs and plants possess to cure diseases.

Maintaining its legacy of being a pioneer in the field of pharmacology, India today enjoys the exalted position of being the ‘Pharmacy to the world’.

The Pharma industry has posted a robust, double-digit growth over the last few years. The industry was worth US $36.7 Billion in 2017 and is projected to grow to US $55 Billion by 2020.

Apna Raises $70M in Series B Funding from Insight Partners…

It is quite heartening to note that the Pharma sector is out-performing most other sectors in achieving consistently high growth.

The pharma exports stood at $ 17.27 billion in 2017-18. While India is exporting to over 200 countries, the major market, however, is the USA. India is the largest provider of generic drugs globally and 80 per cent of the anti-retroviral drugs used worldwide to combat AIDS are supplied by Indian pharma companies.

Thus, India is rendering a yeoman service in developing countries by providing access to life saving medicines at affordable prices. With Indian companies producing the drugs at economical rates, the cost of HIV/AIDS treatment has gone down from $ 12,000 to $400 per year.

I was informed that over 65 per cent of the WHO’s demand for DPT and BCG vaccines and 90 per cent measles vaccine are supplied by India. Thus, India’s contribution to global healthcare has been spectacular.

Dear students, there is immense scope for technology, innovation and research in pharmaceuticals. We have the second highest number of US FDA approved facilities. A major advantage for India is the significantly lower labour costs when compared with than other countries.

The government has introduced a range of fiscal incentives to promote domestic manufacturing.

Providing essential drugs and medicines at cost-effective prices is the key focus of Department of Pharmaceuticals, Ministry of Chemicals and Fertilizers. The government and the Pharma sector must act in unison to effectively harness the power of Information technology to improve efficiency.

‘Pharma Jan Samadhan’, a customer grievances redressal system was launched and a mobile application – ‘Pharma Sahi Daam’ that provides real-time information to consumers on prices of Scheduled/Non-scheduled medicines has also been introduced.

Quality medicines, surgicals and consumables are now available at affordable prices to the poor and disadvantaged sections through the “Pradhan Mantri Bhartiya Jan aushadhi Kendras”.

I would like to see India emerge as the world leader in generic medicines. At the same time, we should not hesitate to promote Indian systems of medicine.

I urge young researchers to work towards standardizing and benchmarking Indian systems of medicine. Using globally established experimental protocols, you must establish the efficiency, validity and efficacy of the traditional medicines.

There should be an unwavering commitment to high standards of quality in drug manufacturing and quality frameworks such as Good Manufacturing Practices should strictly be adhered to.

There should also be a thrust on research and innovation. New healthcare challenges are emerging every day, especially with the alarming rise in the number of non communicable and lifestyle diseases and cancers.

All this will have to be achieved without compromising on the affordability of drugs. Pharmaceutical sector has the crucial responsibility of saving human lives. Pharma companies should go above and beyond their CSR mandates to provide life saving and other essential drugs to those who cannot afford them.

While major multinationals and pharma companies will be interested in producing and selling drugs that cater to common and chronic diseases affecting larger populations, there is a need to develop new molecules and drugs to combat some of the lesser known diseases, particularly the group of diseases called as “rare diseases”.

In India the number of people suffering from rare diseases is estimated to be more than 70 million. While it is estimated that there are around 7,000 rare diseases in the world, majority of diseases have no treatment and the costs are prohibitively expensive in cases where they are available. It is, therefore, important for the Indian pharma industry to look into the need for developing low-cost drugs for treating rare diseases.

In view of the initiatives taken to promote the pharmaceutical sector in the country, I am confident that the goal to make India a global leader in end-to-end drug manufacture would be achieved in the coming years. The plan to start a single window facility for approvals and consents augurs well for the pharma industry.

Friends, although the intake of pharmacy students has improved substantially in view of the drastic increase in the number of pharmacy colleges in the country, the need of the hour is to revamp the pharmacy education in India and bring it on par with global standards. To make this happen, the industry and academia need to come onto a single platform for providing a better tomorrow to our youngsters.

I am happy to note that the Exhibition Society is running one of the state-of-art Pharmacy colleges in the country by offering quality education. My best wishes to all the students for a bright and successful careers ahead!