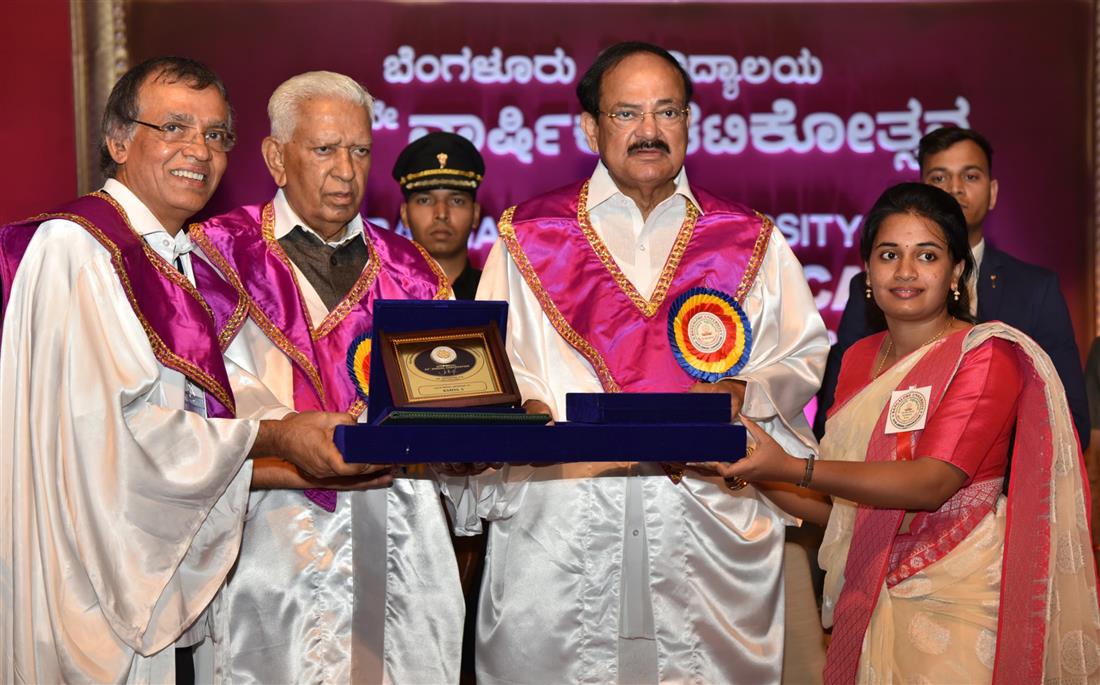 New Delhi: The Vice President of India, Shri M. Venkaiah Naidu has expressed anguish over continued terror attacks in various parts of the world and called upon international agencies such as the United Nations to conclude deliberations on the Comprehensive Convention on International Terrorism, put forth by India to criminalize all forms of international terrorism and deny terrorists, their financiers and supporters access to funds, arms and safe havens.

Shri Naidu urged upon the world community to initiate concerted action to eliminate the scourge of terrorism from the face of the earth.

Addressing the 54th Annual Convocation of Bangalore University, in Bengaluru today, Shri Naidu said it was high time that the world takes concerted action to deal with the inhuman menace of terror by alienating those aiding abetting and encouraging terror as a state policy. ‘Mere condemnation and compensation will not suffice. We have to contain and root out terror in all its forms by going to the root cause’, he added.

Pointing out that world over, thousands of innocent people were being killed and still the world community, the Vice President opined that without attaining peace, progress would have no meaning.

Expressing anguish over the barbaric terrorist attacks in Sri Lanka, which claimed the lives of several innocent people, Shri Naidu said India stands in solidarity with the Sri Lankan Government and its people in this hour of distress.

The Vice President observed that higher education must transcend the barriers of caste, creed, religion and gender. He pointed that the principles of social equity and gender parity were of paramount concern as far as higher education was concerned. Providing quality education on par with global standards was the need of the hour, he added.

Reminding the gathering about India’s illustrious heritage, Shri Naidu said that India must resurrect the glory of the bygone era and take up the production and dissemination of knowledge on a wide scale through initiatives such as the digitization of higher education through expansion of online courses, massive open online courses (MOOC) courses and distance education..

The Vice President called upon higher educational institutions to promote interactive academic programs with diverse specializations and facilitate convergence of disciplines. ‘The system of Higher education must prepare the youth to be competent enough to serve the current techno-capitalist world system and its knowledge economy’, he added.

Observing that a knowledge oriented paradigm of development would enable India to leverage its tremendous demographic advantage, the Vice President stressed that greater emphasis must be accorded to a skill based education by incorporating a three-pronged strategy of ‘skill, reskill and unskill’ as well as ‘learn, relearn and unlearn’.

The Vice President said there was a need to revamp and reform our higher education system to not only make our institutions global centres of learning but also to ensure that the students were able to meet challenges posed on the employment front.

“First of all, let me extend my hearty congratulations to those who are graduating today from this institution which has a reputation for excellence.

Today, you have reached a significant landmark in your academic career as well as in life,which would not have been possible without your dedication and hard work.

Let me also appreciate the faculty members for preparing the students to achieve this goal by providing them quality education, training and guidance.

Swami Vivekananda once said that “Education is the manifestation of the perfection already in human being”. I am sure that those of you, who are passing out from the portals of this great citadel of wisdom today, will realize your true potential and contribute your best in the process of nation building.