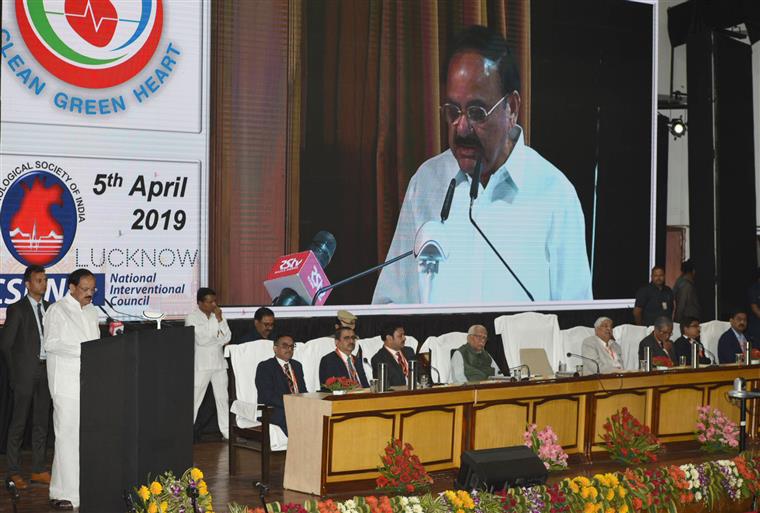 New Delhi: The Vice President of India, Shri M. Venkaiah Naidu has described the rise in non-communicable diseases as a “deeply disturbing trend” and called upon the medical fraternity to educate the people on the dangers of leading sedentary lifestyles.

Addressing the Annual Meeting of the National Interventional Council (NIC) of the Cardiological Society of India at the Sanjay Gandhi Postgraduate Institute of Medical Sciences (SGPGIMS), Lucknow in Uttar Pradesh today, the Vice President quoting a 2017 report of India Council of Medical Research (ICMR), said that disease burden from non-communicable diseases increased from 30 per cent to 55 per cent between 1990 and 2016, while the communicable diseases dropped from 61 per cent to 33 per cent in the same period.

Pointing out that factors such as high levels of stress, increased incidence of diabetes, blood pressure, smoking, excessive consumption of alcohol, lack of exercise and lack of proper sleep were contributing to cardiovascular diseases, he said that lifestyle modification was one of the key interventions needed to prevent premature heart attacks.

Shri Naidu said that it had been proven beyond doubt that regular moderate intensity aerobic exercise like brisk walking, cycling, jogging, and swimming for five days a week would help in reducing the probability of heart disease.

Observing that India stands poised to reap the biggest demographic dividend in history, he opined that a healthy and agile youth was essential to achieve its dream of inclusive and sustainable development and occupy its rightful place of leadership in the world. He stressed the need to encourage children to be physically active and be involved in sports and games right from school days to avoid NCDs.

Referring to the growing fad for junk food among youngsters, he advised them to say no to junk food as it was causing harm to their health and in turn affecting quality of life.

Shri Naidu said that the nation must invest much of our resources in prevention and early detection of disease. He called for massive screening drives to identify risk factors for cardiovascular disease among people and take preventive measures.

University of Pretoria: UP co-hosts lekgotla on challenges…

University of Johannesburg: South Africa is on day 250 of…

Observing that primary health centres must serve as bulwarks in our battle against cardiovascular disease, the Vice President stressed that transforming PHCs into a robust, responsive and well equipped network of institutions was important.

Mentioning that the nation has improved the penetration of healthcare services across the country, Shri Naidu said that increase in the at-birth life expectancy from around 37 years in 1951 to around 68.3 years in 2011-15 has been the most noteworthy achievement in the public health arena since Independence.

Stating that India must invest more resources in R & D, he said unimaginable advancements were being made in Medical Science. “Cutting edge research in disruptive technologies such as Cybernetics and Artificial Intelligence (AI), including machine learning and augmented reality are altering the paradigms of medical science”, he added.

Calling for improving our health sector in terms of quality, accessibility and affordability, the Vice President said “Although our health care services are among the cheapest in the world, some of the life saving drugs and procedures are still beyond the reach of the common man. All the stakeholders in the health sectors need to work in synergy to health care affordable and accessible to common man”.

The Vice President said India must also stand out and serve as a model for quality, affordable healthcare for other nations to emulate. “I have no doubt that we have the capability to achieve this goal and more”, he added