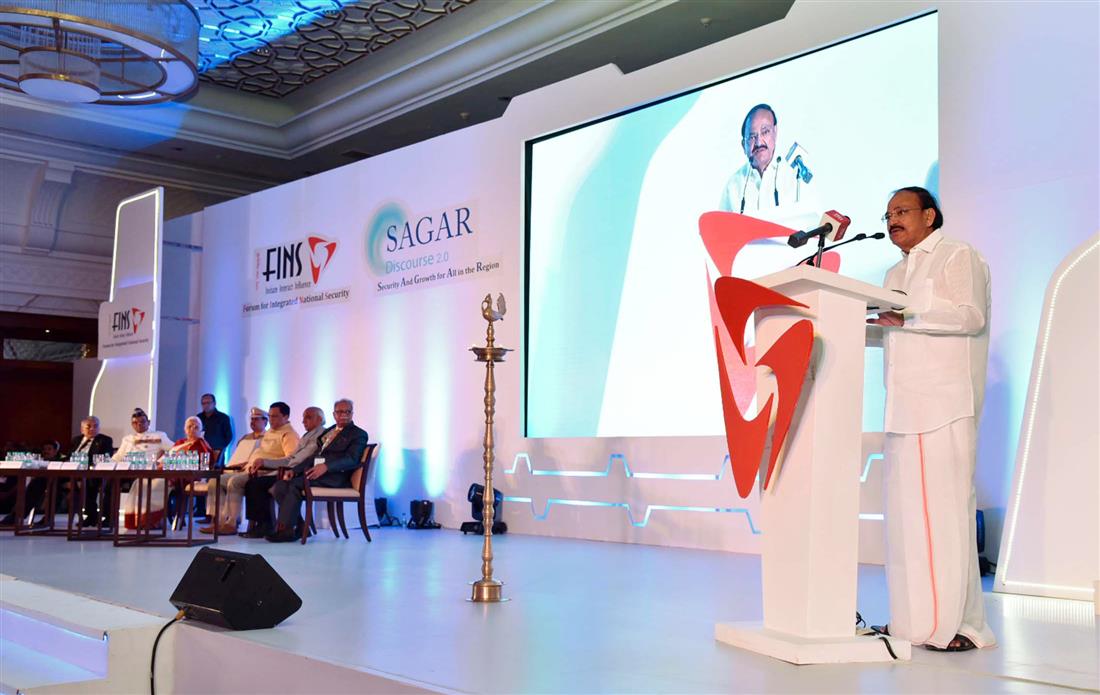 New Delhi: The Vice President of India, Shri M. Venkaiah Naidu has said that the purpose of Science & Technology should be to make common man live comfortably. He was addressing the Maritime Conference SAGAR Discourse 2.0, organized by Forum for Integrated National Security, in Panaji, Goa today.

The Vice President stressed on the need to update technical capabilities, to ensure national security and said that security threats like cross border terrorism, ecological vulnerability and environmental deterioration are not limited to one country and they require a united response from the global community. Such problems have no boundaries and stress the need to use scientific prowess to find solutions, he added.

The Vice President said that India as a responsible power has always collaborated with other nations on space issues. He cautioned the scientific community to beware of the threats to space systems from debris and other irresponsible activities are adding to the complexity. We all need to be concerned with the pursuit of weapons systems capable of destroying satellites in orbit, he added.

Calling for International efforts to focus on the likely global consequences of conflict in space domain, the Vice President said that such conflicts might not be limited to just a few countries but could extend to all spacefarers and the entire globe.

The Vice President said that India must intensify relations with traditional partners and establish new ties with other nations to promote peaceful use of outer space. The activities include carrying out joint activities of mutual interest, sharing expertise in applications of space technology and participating in international events dealing with space, he added.

The Governor of Goa, Smt. Mridula Sinha, the Minister for Panchayat, Goa, Shri Mauvin Godinho, the former Chairman of ISRO, Dr. Kiran Kumar, the Convener of SAGAR Discourse, Dr. Prabhakaran Paleri and other dignitaries were present on the occasion.

“I am extremely happy to inaugurate – SAGAR Discourse 2.0 which focuses on space domain.

I am delighted to know that last year’s Maritime Conference saw the participation of delegates from 22 countries, including senior ministers, diplomats and practitioners. I am told that the extracts of that conference in the form of actionable inputs were sent to respective ministries for implementation.

It is very apt that Forum for Integrated National Security has chosen Goa for this meet. It is the place where core Indian values have merged with international culture. Goa is the place where tourists and the visitors from all over the world come and experience the colours and the vibrant culture of India.

This is the State where one finds some of the oldest places of worship of different religions as also the state of the art institutions of science and technology. Goa truly is a melting pot! This State also has a well-groomed hospitality culture. I am sure the delegates would enjoy their stay here.

The term SAGAR – coined by our Prime Minister Shri Narendra Modiji, means Security And Growth for All in the Region. This thought I am sure will find its true expression here. This is the region which has some of the fastest growing economies, abundant natural resources, young and vibrant population and some of the brightest scientists and technologists.

At the same time, this region also faces security threats like cross border terrorism, apart from population explosion, ecological vulnerability and environmental deterioration. These problems have no boundaries and the solutions need also be borderless.

I am sure, the agenda for this discourse will address various problems confronting the region. We need to collaborate and make optimal use of the scientific prowess available in the region to find solutions. Unless we address these problems urgently the future of humanity would be uncertain.

Under the leadership of Shri Narendra Modiji, India is committed to address these global issues and take a leading role as a responsible power.

The borderless problems as stated earlier require seamless solutions and I am sure that space-related technologies will play an important role in providing us with the wherewithal to improve the lot of humanity.

As you all are aware, the concept of space is not new to India. In fifth-sixth century, Aryabhata represented the pinnacle of space knowledge at that time. In 1975, India launched the first satellite by the same name. Later, we had a successful Mars mission and our space scientists are now poised to launch a mission to send man to space.

India as a responsible power has always collaborated with other nations on space issues. As such, the outer space environment is very complex with over 80 nations and numerous government consortia, scientific and commercial firms accessing and operating satellites for countless economic, scientific, educational and social missions.

At the same time, threats to space systems from debris and other irresponsible activities are adding to the complexity. We all need to be concerned with the pursuit of weapons systems capable of destroying satellites in orbit.

Competitive approach and the important role played by space technologies in improving economies and in providing national security have heightened international community’s interest in space security. Diplomatic engagement coupled with scientific cooperation will help in finding common solutions to the challenges we face in relation to the outer space environment.

International efforts need to focus on the likely global consequences of conflict in space domain. Such conflicts might not be limited to just a few countries but could extend to all spacefarers and the entire globe.

For India, international co-operation in space sector is aimed at intensifying relations with traditional partners and establishing new ties with other nations for promoting peaceful use of outer space. The activities include carrying out joint activities of mutual interest, sharing expertise in applications of space technology and participating in international events dealing with space.

Indian Space Research Organization (ISRO) is involved in space co-operation with the space agencies of over 40 nations and four multi-national bodies.

The international cooperation for exploitation of space covers various aspects, including launch, satellite and ground segments. Although, cooperation with most nations is on commercial basis, it also provides an opportunity to engage with global south.

As part of the neighbourhood first policy, the Prime-Minister had mooted the idea of SAARC Satellite. This is to provide Communication and Meteorology support from geosynchronous orbit to serve the needs of SAARC member nations.

Last year ISRO had facilitated data request for 16 disasters in nine nations in the Indo-Pacific region. India has also been at the forefront of search and rescue operations and is active in ASEAN Space Co-operation projects.

In the wake of the successful launch of Chandrayaan and Mangalyaan, India is pursuing Human Space Flight programme.

Dear brothers and sisters, the world is facing many challenges from security to climate change. Burgeoning population also continues to put burden on the resources available. Along with the population controlling measures, all the space-faring nations need to step up collaboration on a range of issues like tackling poverty and hunger, improving crop yields, developing drought-resilient crops, predicting floods, drought and other extreme weather patterns more accurately, among others.

Crowding of low earth orbit, mitigation of space debris, development of capacity in space situational awareness and advancement of International space laws for activities such as space mining and tourism need multipronged efforts at various levels.

India would be looking at the space co-operation at three levels—governmental, scientific-technological and private sector commercial level.

On behalf of the government of India, I assure all the co-operation and declare open the conference.

Schaeffler India empowers the engineers of tomorrow with H.O.P.E Scholarship

VisionSpring Moves Manufacturing from China to India to Create a Clear…