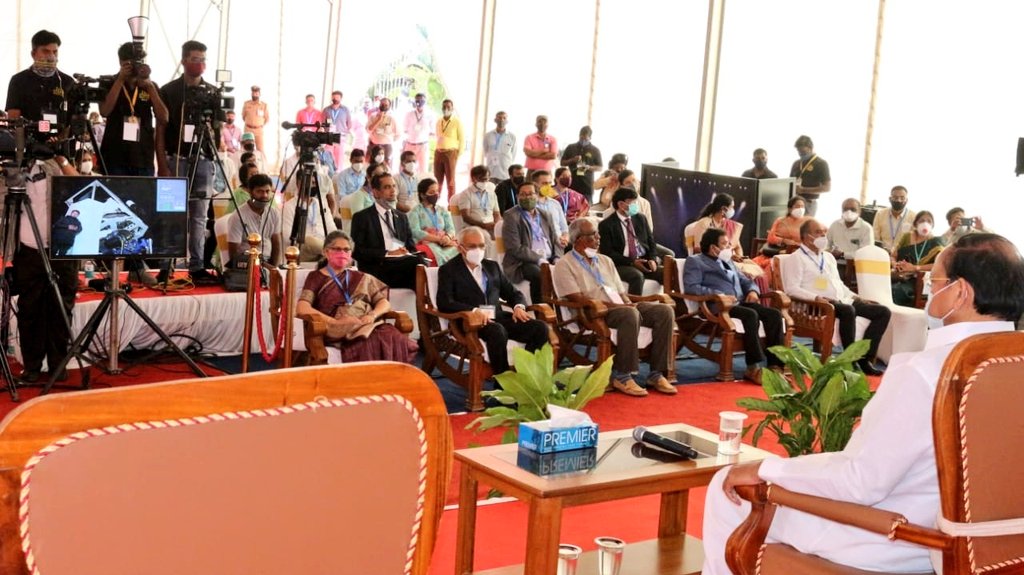 New Delhi: The Vice President of India, Shri M Venkaiah Naidu today said the ultimate aim of science is to make people’s lives comfortable and happier and urged scientific institutions to provide a platform for innovations and technological advancements.

Addressing the students and the faculty at the Centre for Research and Education in Science and Technology (CREST) of the Indian Institute of Astrophysics, Bengaluru, he said that science is the foundation for the progress of any society as it deals with truths of verifiable facts through repeated experiments. He stressed the need to inculcate scientific temper among the people, particularly the younger generation. He also called for providing equal opportunities and encouragement to women scientists.

During his visit to the CREST campus, the Vice President inaugurated the two new facilities–A large segment polishing facility for mirrors for the Thirty Meter Telescope and an Environmental Test Facility of small payloads, as part of the M.G.K. Menon Laboratory for Space Sciences.

He also witnessed the integration of the space payload inside the M.G.K. Menon Laboratory for Space Sciences and the remote operation of the 2m Himalayan Chandra Telescope.

Underlining the importance of studying basic science, he said India has a rich heritage from the ancient times, in astronomy and mathematics. The facilities inaugurated today will help India in the Atmanirbhar Bharat Mission, initiated by the Prime minister.

The Environmental Test Facility will help the space sector in the coming years.

It may be recalled that India joined the international consortium of research organizations and Science institutes in five countries: India, Japan, China, Canada, USA to build and operate the Thirty Meter Telescope (TMT), the largest ground-based astronomy project in the northern hemisphere. India is a 10% partner in the multi-billion US dollar (~USD 3B) project proposed to be sited on top of the Mauna Kea, Hawaii. Project is expected to be completed in the early 2030s.

The “Thirty Meter” in TMT refers to the 30-meter diameter of the main mirror or the primary mirror. Since making a single 30-m glass blank for astronomy is not possible, it comprises 492 segments of 1.45-m each. The complex project involves making all the 492 segments to act as one single mirror of 30-m diameter while the telescope is tracking the sky with extreme precision. India’s contribution relates to the software, electronics and hardware to control the 492 segments behave as a single mirror within a few nanometers. More than a dozen industries are involved in making these very precision systems.

Other crucial Indian contribution includes delivering about 90 segments to the project. Mirrors will be fabricated at the Development of India TMT Optics Fabrication Facility (ITOFF) at CREST using SMP or stress mirror polishing technology which is different from the conventional technology. The SMP technology will deliver two segments in a month compared to conventional polishing which takes anywhere between 12-18 months. India

After inaugurating the facility the Vice President, congratulated the scientists and engineers for their efforts in meeting the national and international goals by setting-up this world-class optics facility. He also complimented the DST and DAE for their vision to support scientific projects of this scale. He added that our participation is part of India’s age-old cultural ethos of “Vasudhaiva Kutumbam” (World is one family). It is a great pride for us to be part of this scientific endeavor for humanity’s common good to understand our origin and evolution in the universe.

Observing that India’s long tradition of Astronomy is well known to the world, Shri Naidu said that India has made several notable contributions to the world of astronomy from ancient times to the modern era.

The Vice President said that participation in such mega scientific projects would provide a level playing field to Indian scientists and help the industries to build capacity in high technology field.

He said India was moving up in the technology front very rapidly. The much-talked about ISRO space mission “Mangalyan” and India’s astronomy observatory “ASTROSAT (astronomy satellite) for surveying the sky in X-ray and UV, and the soon to be launched Aditya L1, a solar study mission, are a few examples.

The Vice President said that India’s foray into global and world class national scientific ventures seems natural, given its intellectual reserves and global stature as an emerging economic and political power.

On this occasion, the Vice President also emphasised the importance of mother tongue in one’s life and said that one should always respect one’s mother, motherland, mother tongue and Guru. He appealed to the students to always work towards the development of their country no matter wherever they live. He asked them to ‘learn, earn and return’ to their roots and work for the betterment of the society.

Shri Naidu noted that India has been able to fare better than many developed countries in containing the Covid-19 pandemic. He credited healthy food habits and natural lifestyle of the people in rural India for this. The Vice President also advised the youth to follow a healthy lifestyle by avoiding junk food, practicing yoga and living with nature.

Following is the full text of the speech –

It is a great pleasure to be here, at this campus for Centre for Research and Education in Science and Technology of Indian Institute of Astrophysics, Bengaluru.

It is a matter of great pride that the Department of Science & Technology and also the Indian Institute of Astrophysics are celebrating 50 years of their service to the nation. Let me congratulate the institute for their continued contributions to knowledge creation for the common good of the society at large.

The Indian Institute of Astrophysics has a long history in pursuing astronomical research, and has contributed richly to scientific knowledge. Some of the major discoveries include the presence of element Helium in the Sun and rings around the planet Uranus. This Institute also operates a solar observatory in Kodaikanal which was part of Madras Observatory set-up in 1786. The Kodaikanal Solar Observatory maintains data of continuous observations of the Sun for about 120 years, a treasure trove of solar studies. IIA also operates the Indian Astronomical Observatory (IAO), Hanle, Ladakh, one of the highest altitude observatories in the world at about 4500-meter from the sea level.

Science is the foundation of any society as it deals with truths of verifiable facts through repeated experiments. Inculcating scientific temperament among the society is key for the progress of societies and sustaining humanity.

India’s long tradition of Astronomy is well known to the world. India has made several notable contributions to the world of astronomy right through the ancient times to the modern era. Aryabhatta of 5th Century CE is a well known mathematician and astronomer whose pioneering works include rotation of earth and motions of planets around the Sun etc.

Indian contributions in modern astronomy have been truly outstanding and long-lasting. For example, Meghnad Saha, a great astrophysicist is best known for formulating the well known Saha equation which made it possible to determine the temperature of various kinds of stars using spectral line intensities of different elements. This is one of the most fundamental works on which much of current stellar atmospheric studies stand. Another reputed astrophysicist is Subramanyan Chandrashekar whose works on stellar structure won him the Nobel Prize in 1988. To recognize and honour his contributions to astronomy and astrophysics, NASA named one of its most prestigious and multi-billion dollar space telescopes as Chandra X-ray Telescope.

It is an honour to remember pioneers like Prof. Vainu Bappu, father of modern optical and infrared astronomy in the country who was responsible for building the indigenous 2.3 meter telescope which was one of the largest in the world at that time and the largest in Asia. India recently commissioned a 3.6 meter Devasthal Optical Telescope in 2015, which, at present, is the largest optical telescope in the country.

However, the astronomy community elsewhere have access to 10 meter class telescopes for more than 20 years now, and are planning to build next generation observatories. These require huge financial and human resources necessitating international partnerships. In 2014 the Cabinet, Chaired by the Prime Minister Shri Narendra Modi approved India joining Japan, China, Canada and USA to build a Thirty Meter Telescope in Hawaii, USA. It gives me great pleasure to inaugurate the facility that will fabricate optics for realization of this international endeavor.

India is moving up in the technology front very rapidly. The much talked about ISRO space mission “Mangalyan” and India’s astronomy observatory “ASTROSAT (astronomy satellite) for surveying the sky in X-ray and UV, and the soon to be launched Aditya L1, a solar study mission, are a few examples. The Aditya mission which will be placed in space nearly 15 lakh kilometers from the Earth will enable unprecedented close look of our star, the Sun.

The environmental test facility that is inaugurated today is a facility to space qualify small payloads. This will be opened for use by universities and industry to develop small space payloads. These facilities will help the growth of space sector in the future.

India’s foray in to such global and world class national scientific ventures seems natural, given its intellectual reserves and global stature as an emerging economic and political power. It is important to inculcate scientific thinking in the younger generation. Institutes like this should be able to provide a platform for innovations and technological advancements.

The participation by India in mega-science projects have given the science community a unique opportunity to stand shoulder to shoulder with other advanced nations in the planning and construction of these complex projects. These have also brought the ambitious science experiments and industry together. This is already benefiting the country in capacity building and technology transfer.

I always say that the ultimate aim of science is to make people’s life comfortable and happier. And I am happy to say that astronomy has immensely benefitted the society in multiple ways. There is a vast amount of technology transfer that happens from astronomy to industrial, aerospace, and energy sectors. Many technologies that we take for granted today- x-ray machines, precision clocks, super computers, satellite communication, GPS- are all fruits of research done in astronomy.

Astronomical studies are also helping us understand the evolution and composition of Earth’s atmosphere. This provides us vital insights into the factors relating to climate change and steps required to address the same.

Astronomy is also bringing people and nations together as seen in several international projects.

This universe is a mystery for man. Astronomy does not just expand the horizons of human knowledge, but makes us understand the vastness of the universe. When we see the picture of our Earth seen as a ‘pale blue dot’ from outer space, it makes us sit and think about our existence and purpose of life. It makes us feel humble.

What I saw today at this campus are some of the finest examples of our commitment to basic research and technology development for future generations, and will lay the foundation for an Atmanirbhar Bharat.

I hear from the Director that there is a plan to expand this campus to have a science center for spreading awareness of science and curiosity among children and the general public. I think that will be an important step for reaching out to the public and spreading scientific awareness.

Finally, let me congratulate the scientists and engineers for their incredible work in developing these major scientific facilities for the future generations, and also the Department of Science and Technology, Department of Atomic Energy and ISRO for providing visionary leadership.

I wish all the IIA fraternity a very happy new year.

iednewsdesk Nov 26, 2021
Viruses invade our cells and turn them into virus factories. Researchers at Uppsala University, together with a…

University of Southern California: Practicing gratitude can have…

Kyushu University: Q-AOS Symposium 2021: Past, Present and Future of…