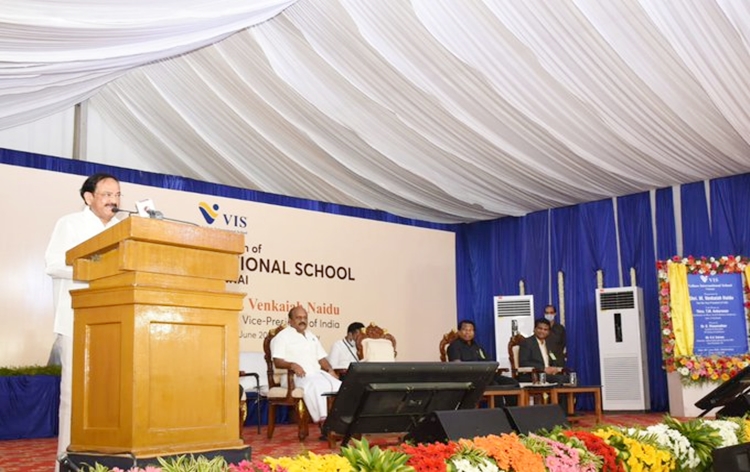 New Delhi: Vice President Venkaiah Naidu has stressed the need to inculcate the spirit of service in the minds of students from a young age. He inaugurated an international school at Kelambakkam near Chennai today. Speaking on this occasion, Mr Naidu said, schools must focus on value-based, holistic education that brings out the greatest potential and the highest virtues from the students.

He observed that in the technology-driven and fast changing world, challenges and opportunities abound. He said, students must be trained to think quickly, be agile and to innovate using cutting-edge technologies to solve the 21st century problems.

The Vice President noted that an educational strategy aligned to a futuristic approach, that shuns rote learning, is necessary. He also asked to do away with the segregation of curricular and extracurricular activities and to encourage multidisciplinary approach in education.

Mr Naidu reiterated that the use of mother tongue in school education necessary. He said, at least until the primary level, the medium of instruction in schools must be in the mother tongue. He observed that only when the children speak their mother tongue, they can truly appreciate the cultural heritage.

He, however, stressed that focusing on one’s mother tongue is not to suggest that one need not learn other languages like English. He suggested that one should learn as many languages as possible, but what is required is a strong foundation in the mother language. He pointed out to studies that show that multilingual abilities lead to better cognitive development in children. He noted that proficiency in other languages helps build cultural bridges and opens windows to new worlds of experience.

Mr Naidu highlighted that schooling lays the foundation for students’ academic and professional excellence in later years. He said, the time the children spend in schools during their formative years shapes their personality and moulds their character. He added that school education determines the individual’s success at a personal level and plays a vital role in building a model citizenry that can take the country forward.

The Vice President said education without values is no education at all. In the effort for an all-round growth of students, he asked educational institutions to provide the required facilities and encourage students to take up regular physical activities. He appealed to students to take up sports or any physical exercise to build a healthy lifestyle. He asked them to experience the world outside, spend time in the lap of nature, interact with all sections of society and understand various crafts and trades.