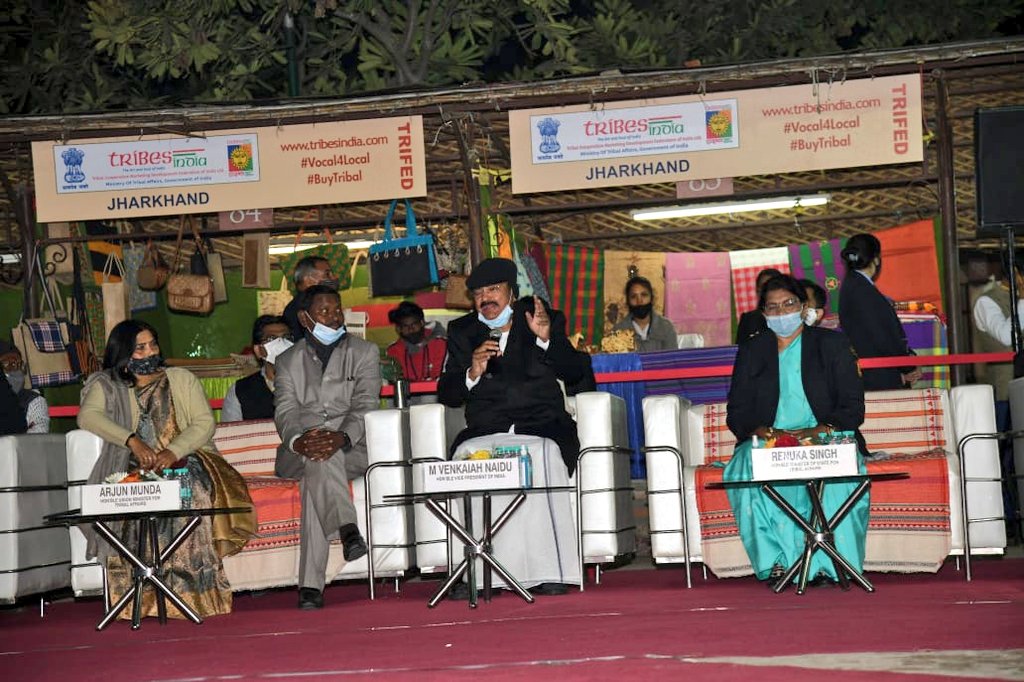 New Delhi: The Vice President of India, Shri M. Venkaiah Naidu today called for a model of development that preserves the special identity of tribals. “Their culture is their identity”, he said and wanted this culture to remain intact, while drawing the Adivasis into the mainstream.

In a Facebook post today after the inauguration of National Tribal Festival “Aadi Mahotsav” at Dilli Haat in New Delhi, the Vice President said that any loss of tribal culture would be an irreparable loss to humanity. Observing that there are unique challenges in the field of tribal development, he said that the Government has always treated Adivasis with a special concern.

Maintaining that Adivasis are the aboriginals, the Vice President said that their way of life is guided by primal truths, eternal values and a natural simplicity. “The greatness of the tribes lies in the fact that they have managed to retain their primal and natural simplicity”, he said and underlined that this quality gives their arts and crafts a timeless appeal. The earthy and natural tribal handicraft instantly touches a primal instinct in all of us, he observed.

Taking note of the wide range of tribal handicrafts, the Vice President emphasized the need to channelize the natural skills of tribal to promote and popularize their products and improve their sources of income. He appreciated the Government for promoting interaction between the tribal artisans and the mainstream designers from reputed organizations. The synergy between these two can generate marketable products of art and handicraft for the top-end global market and added that it would be a win-win situation for the both.

Referring to the high-end demand for tribal products in cities and in the international market, the Vice President said that events such as this Aadi Mahotsav will play an important role in this regard. He praised the Tribal Cooperative Marketing Development Federation of India (TRIFED) for doing significant work for economic empowerment of tribal communities including the promotion of e-commerce and digital platforms to take the business forward.

Shri Naidu also said that the demand for organic food products is growing and TRIFED must tap this niche market. He wanted the TRIFED to ensure that the benefit of higher prices reaches the tribal population.

Speaking at the event, the Vice President called for recognizing and promoting the ingenious tribal talent by marketing their handicrafts even in international markets.

Noting that the Adivasis constitute over 8 % of the country’s population, the Vice President said that the development of tribes is an important focus area of the national objective of inclusive development. He also said that our constitution enjoins upon the Government the responsibility of addressing the special needs of our tribal brothers and sisters. Praising their natural and healthy lifestyle, Shri Naidu suggested that COVID-19 pandemic showed that everyone must eat nutritious food and be physically fit.

Congratulating the Ministry of Tribal Affairs and TRIFED for organising the Aadi Mahotsav, the Vice President appealed to the tribal artisans and Van Dhan suppliers to make the best use of this opportunity to forge links with other artisans and market drivers.

Earlier, the Vice President went around various stalls and expressed his happiness at the wide range of products on display. He interacted with the craftsmen and witnessed various dance performances during the inauguration. Shri Naidu urged the people to visit the Mahotsav, get enriched by the diversity of our country and patronize the tribal products.

University of Western Australia: Program to monitor safety of pharmacy vaccines including COVID

Griffith University: Employment for older workers on the agenda at APEC