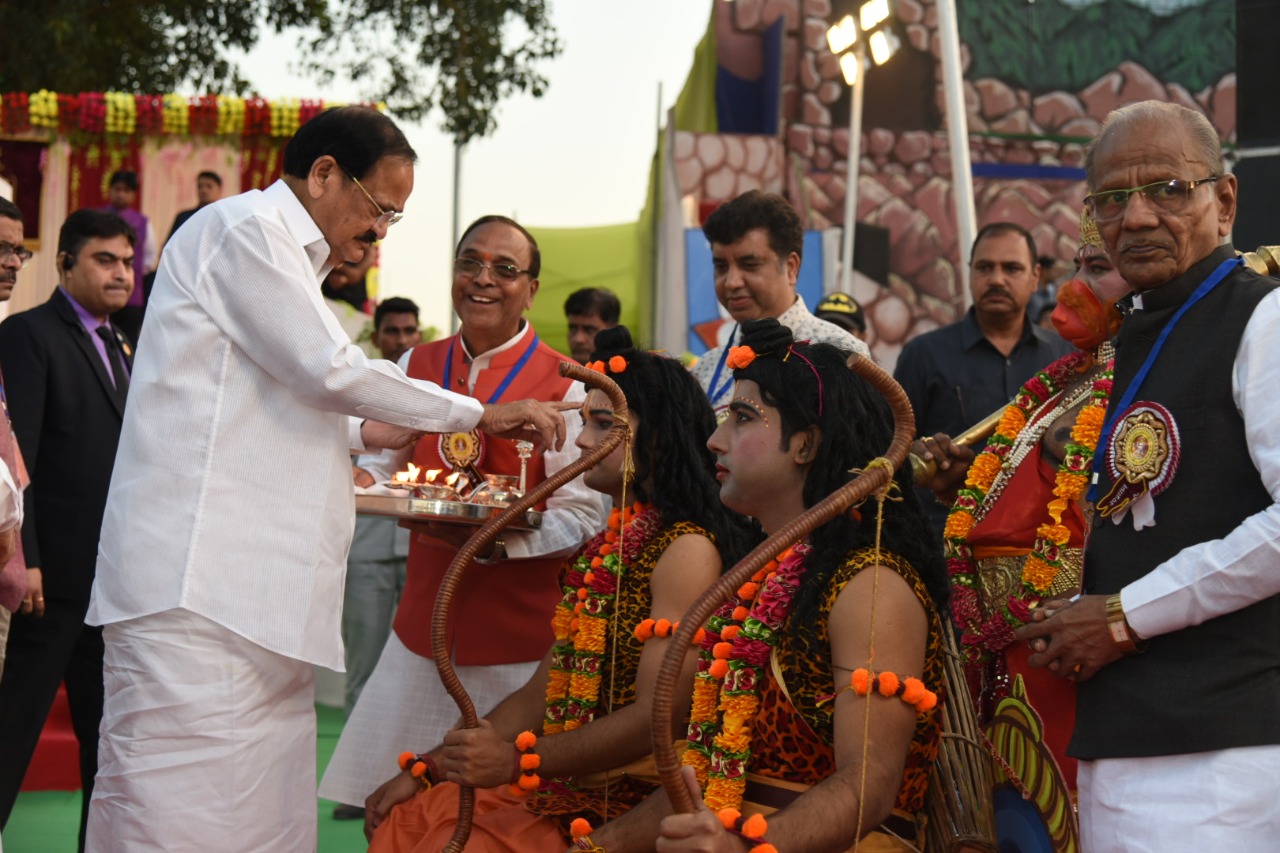 New Delhi:  The Vice President of India, Shri M. Venkaiah Naidu today called upon the people to understand and spread the universal message of Dharma or righteousness as depicted in the timeless epic Ramayana and enrich their lives based on its rich foundational values.

In a Facebook posts titled ‘Rebuilding the shrine, Enshrining the values’ in 17 languages today, the Vice President expressed happiness over the proposed rebuilding of Lord Rama’s Temple in Ayodhya from August 5th.

Calling it a moment of celebration, the Vice President said that this moment could lead to a societal spiritual rejuvenation if we can understand the essence of Ramayana and understand it in the right perspective. He described it as a tale that captures the unique Indian vision of Dharma or righteous behaviour.

Shri Naidu said that this event makes us recollect Ramayana, the timeless epic that has become a part of our collective consciousness. He also described Lord Rama as an exemplary ideal iconic figure whose life exemplified values that are critical for establishing a just and responsible social order.

Praising the two millennia old epic, he said that Ramayana encapsulates a vision that is so universal that it has left a conspicuous and profound influence on the culture of many countries in South East Asia.

Quoting the Vedic and Sanskrit scholar, Arthur Anthony MacDonnell, the Vice President said that Rama’s ideas as told in the Indian texts are secular in origin and their influence on the life and thought of people have been profound over at least two and a half millennia.

Stating that Ramayana has captured the imagination of many poets, playwrights, dancers, musicians and folk artists not only within India but across many countries, Shri Naidu listed several countries in South East Asia like Java, Bali, Malaya, Burma, Thailand, Cambodia and Laos where the story of Lord Rama holds great cultural significance.

Further demonstrating the epic’s universal appeal, the Vice President gave an elaborate list of the different versions of Ramayana popular in different countries spanning from South Asia to East Asia.

“The epic has been translated into Russian by Alexander Baranikov and the theatre version produced by Gennady Pechnikov, a Russian theatre artist became hugely popular”, he said.

Citing the examples of the Angkor Wat’s panels depicting scenes from Ramayana and the famous Ramayana ballet at the Prambanan temple in Indonesia, Shri Naidu highlighted Ramayana’s influence on the cultural canvas of the world cutting across geographical and religious boundaries.

It is interesting to note that Ramayana has been adapted by other religions like Buddhism, Jainism and Sikhism in some form or the other, he wrote in the Facebook post.

Noting that the epic has been retold in so many different versions in so many languages, Shri Naidu said that there is something in the epic’s theme and the narration that grips the attention of diverse audiences.

Calling Rama as an embodiment of the finest qualities a human being can aspire to imbibe, the Vice President said that Ramayana is a story that offers a number of illustrations of these qualities.

As the story unfolds and Rama’s journey across India proceeds, we get a fascinating glimpse of his adherence to a set of values which includes truth, peace, collaboration, compassion, justice, inclusion, devotion, sacrifice and empathy, he said and added that this set of values are at the core of Indian world view.

Calling these values universal and timeless, Shri Naidu said that they make Ramayana a relevant guide even today.

Discussing Mahatma Gandhi’s use of the metaphor of Rama Rajya, the Vice President described Ram Rajya as an ideal of a people-centric democratic governance founded on values of empathy, inclusion, peaceful co-existence and constant quest for a better quality of life for the citizens that can serve as a benchmark, as a guidepost, as an inspirational springboard in our national endeavour to deepen our democratic roots.

It can help us move forward to strengthen our political, judicial and administrative systems, he said.