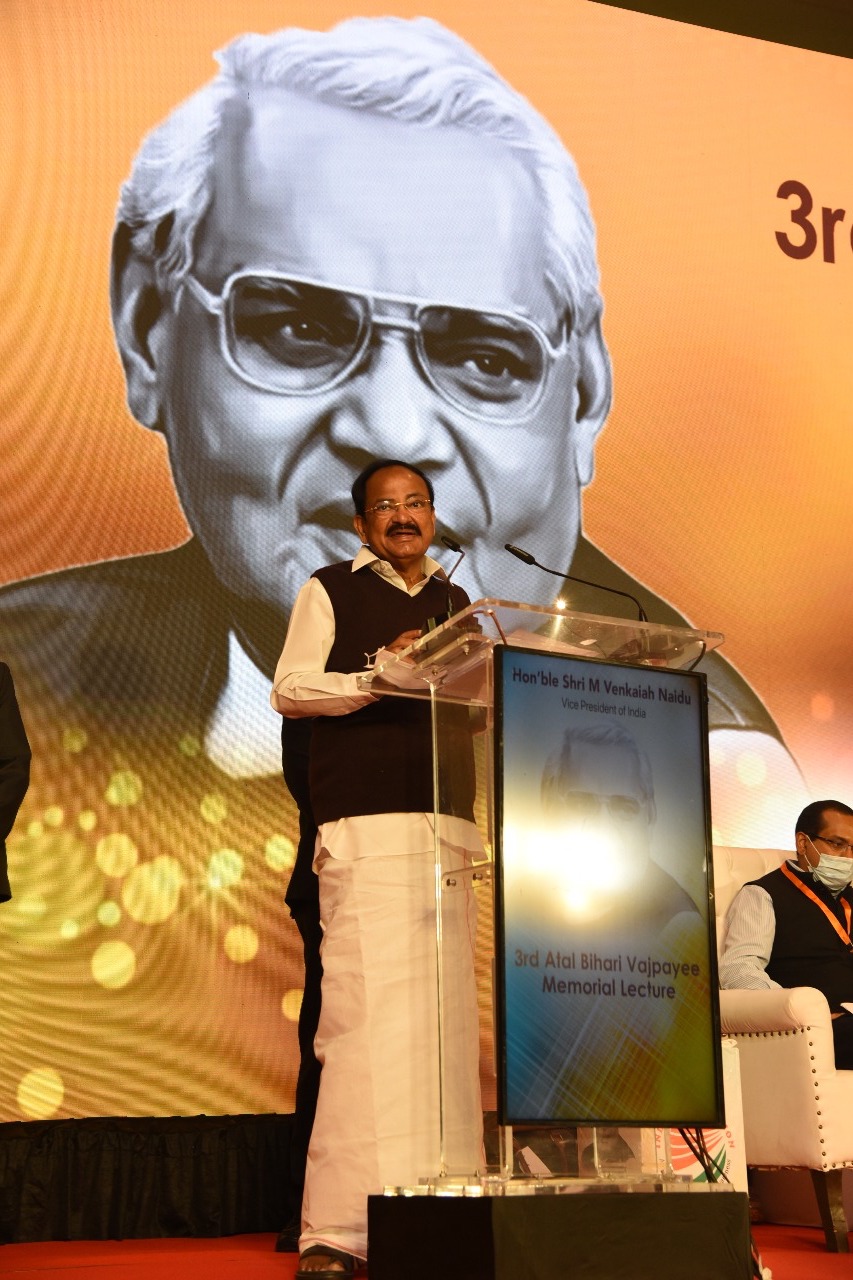 New Delhi: The Vice President of India, Shri M. Venkaiah Naidu today expressed concern over the erosion of values in public life and cautioned that people will lose faith in the political class unless urgent and collective action is taken towards cleansing the system and promoting clean politics.

Delivering the 3rd Atal Bihari Vajpayee Memorial Lecture organised by the India Foundation in Hyderabad today, Shri Naidu emphasised that it is the duty of all political parties to ensure that their members, including legislators, maintain ethical conduct at all times and at all places. He also appealed to the legislators to raise the level of debates, follow standards, avoid unruly behaviour and always adhere to 3Ds—discuss, debate and decide—avoid the 4th D-disrupt.

The Vice President remarked regretfully that the absence of value-based politics, lack of ideology, hunger for power, muscle and money power and the entry of people with a criminal background into politics is leading to violence in the political arena and debasing politics. “Unless these undesirable trends are checked, the situation will further deteriorate and cause irreparable damage to the country’s polity”, he cautioned.

He also called upon the political parties to shun populism and accord priority to long-term development. “Political parties should not resort to competitive populism. Such policies will prove to be unproductive in the long run”, he warned.

Expressing dismay over the sway of 4Cs—cash, caste, criminality and community—in Indian politics, he appealed to the people to elect their representatives on the basis of other 4Cs—Character, Conduct, Calibre and Capacity. Only then India’s democracy can flourish and become a role model for other nations. We are the largest parliamentary democracy and we must set an example to the whole world, he added.

He appealed to the youth to learn from the lives of visionary statesmen like Shri Atal ji and be at the forefront of eliminating evils like corruption, discrimination of any form, violence against women and the problem of poverty.

Paying rich tributes to former Prime Minister, Shri Atal Bihari Vajpayee, the Vice President called him as one of the most respected and admired Prime Ministers in India and abroad. Terming him as an embodiment of decency, dignity and decorum, Shri Naidu said that Atal ji inspired the people of the country and enjoyed their goodwill and confidence.

Remembering his long association with late Shri Atal Ji, the Vice President called Atal Ji and Advani Ji as the gurus, guides, philosophers and mentors for many of his generation. He called Vajpayee Ji as a man of impeccable integrity and high moral values who never compromised on the values in which he believed.

Recalling his amicable nature, the Vice President said that Shri Vajpayee only had friends and no foes across the political spectrum and called it the rarest of virtues in our public life. Remembering Shri Atal Ji’s long parliamentary experience, the Vice President said he enriched the debates with the force of his thoughts, the flow of language, the punch and the wit and his occasional poetic expressions. The Vice President described Shri Atal ji as a towering intellectual and an orator par excellence, whose simplicity and disarming innocence struck an instant chord with masses. We sadly miss his presence but are always reminded of his persona, he added.

Highlighting that Shri Vajpayee’s was the first non-Congress Prime Minister to complete a full term in office, the Vice President said that his tenure saw the emergence and consolidation of a new spirit of nationalism in the country reflecting the change in the mindset of the people. We are now witnessing a further consolidation of this spirit, Vice President added.

Speaking on the theme of this year’s lecture- “Building democratic consensus – The Vajpayee way”, Shri Naidu said that for Atal Ji, ‘Consensus’ was not an expedient political tool rather it was a core element of his convictions. His consensual approach made Atal Ji widely acceptable across the social and political spectrum, Vice President added.

This consensual approach enabled him to successfully lead a large coalition to its full term in an era of unstable coalition Governments. Lauding Shri Atal Bihari Vajpayee for his contribution in the domain of coalition politics, Shri Naidu called him as the ‘Father of Coalition Practices’ in India.

However, Atal Ji’s ability to forge consensus did not necessarily mean compromise all the time, Vice President said and cited the example of Shri Vajpayee’s second stint as the Prime Minister in 1999 when he refused to budge under the pressure of a coalition partner and sacrificed his government.

Calling Shri Vajpayee as ‘Vikas Purush’, Shri Naidu said that despite heading a coalition government, he successfully overcame all hurdles and paved the way of socio-economic transformation of the nation. Highlighting Shri Vajpayee’s primacy to economic reforms, the Vice President referred to several of the initiatives pioneered by him including the creation of a separate ministry of disinvestment, introduction of Fiscal Responsibility and Budget Management (FRBM) Act, Golden Quadrilateral project, electricity reforms, improving connectivity and providing free elementary education.

Referring to the path-breaking Pradhan Mantri Gram Sadak Yojna (PMGSY), Shri Naidu said that Atal Ji ushered in a connectivity revolution by aggressively pursuing the building of national highways and promoting communication infrastructure. “Shri Atal Bihari Vajpayee fast-tracked development in various sectors, from rail connectivity, air connectivity, tele connectivity, and he even achieved political connectivity! He brought many parties together on the same platform with his style of politics”, he added.

The Vice President termed the Vajpayee years as the golden era for the economy as it grew at a rate of 8% per year. Quoting the late Prime Minister, the Vice President said “Empowering the individual is empowering the nation. And empowerment is best through rapid economic growth with rapid social change.”

Calling Shri Vajpayee as a lover of peace and harmony, the Vice President said that he guided our country’s foreign policy on the foundation of the ancient values of our land of peaceful co-existence.

Describing the steely resolve of Shri Atal Bihari Vajpayee, the Vice President said that his decision of conducting nuclear tests in 1998 and deft handling of the economic sanctions thereafter amply demonstrated this. It was his firmness and clarity of thought that the leading powers of the world refused to condone the aggressor during the Kargil conflict.

Stating that our Constitution and parliamentary institutions offer clear guidance and opportunities for a negotiated resolution of various issues, the Vice President emphasised that every contentious issue can be resolved through dialogue and discussion.

Referring to the assertion of ‘Sabka Sath-Sabka Vikas-Sabka Vishwas’ by Prime Minister Shri Narendra Modi, the Vice President called it an affirmation of the commitment to the spirit of inclusive and democratic governance and the continuation of Atal Ji’s legacy.

Professor Yu.M. Kilin – Laureate of the Year of the Republic of Karelia