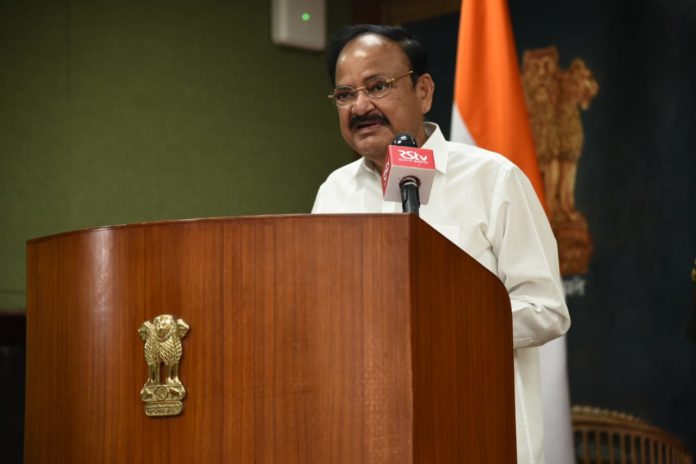 New Delhi: The Vice President of India Shri M. Venkaiah Naidu today called for multipronged efforts to make Indian agriculture sustainable and profitable. He said that we will be able to produce more in less area by changing our approach and practices.

Inaugurating the 120th birth anniversary celebrations of Acharya NG Ranga organised by Ranga Trust, Shri Naidu described him as a great freedom fighter, a farmers’ leader, a social reformer and an outstanding parliamentarian. “A true son of the soil, he is considered as the father of the Indian Kisan Movement along with “Swami Sahajanand Saraswati,” he added. He further said that ensuring income security to all farmers will help achieve the core aspiration of Acharya NG Ranga which was the welfare of the farmers.

Recalling his personal association with Acharya Ranga, the Vice President said that he has been deeply influenced by the life and vision of Acharya N.G. Ranga. Calling him as the epitome of dignity, Shri Naidu said that for Acharya Ranga politics and public life was a mission and he always followed value- based politics.

Talking about the high standards of debates and parliamentary conduct shown by Acharya Ranga, he said that there used to be rapt attention whenever Acharya Ranga spoke in the Parliament.

Shri Naidu further said that as the Chairman of Upper House, it pains him to see the standards of debates going down. He appealed to all lawmakers to study the life and teachings of Acharya Ranga and learn from his conduct as a Parliamentarian. Debates should be constructive and not disruptive, he added.

The Vice President said that Acharya Ranga as was the farmers’ voice in parliament and stressed need to ensure that our farmers get the fruits of their hard work.

He called for bringing effective synergy between traditional knowledge and state-of-art technology. He said that there was a need to popularize local innovations so that they can be replicated in other areas.

Referring to the new wave of technology in agriculture, he said it was more than just the shift to mechanization like the use of tractors. While basic mechanization should further expand to all corners of the country, we should not lose sight of the cutting-edge technologies that are changing the way agriculture is practiced the world over, the Vice President added.

Calling for developing more climate-resilient seed varieties, Shri Naidu stressed the need to adopt precision-agriculture practices, which have become the order of the day now with the use of drip irrigation, drones and sensors that cater to the needs of each individual plant.

Pointing to the use of artificial intelligence in agriculture in countries like Japan, he said “We should not lag behind in experimenting with such technologies here”.

The Vice President expressed happiness that agriculture is one sector that has done well during this pandemic. He also said COVID-19 has also taught us important lessons about the changes we need to make to our eating habits.

He said the consumers were expecting higher levels of nutrition in their food. “This presents an excellent opportunity for budding entrepreneurs in agriculture while giving a profitable and steady income to the growers”,

Expressing his concern over the increase in extreme weather events in the recent decades, he said the farmer becomes the worst-hit in every adverse event. “The farmer has been perennially facing a variety of problems like shortage of water, farm labour, lack of timely and quality inputs, lack of mechanization, cold storage facilities and access to timely credit as also the absence of effective marketing system are some of the reasons for agriculture not fully reaching its full potential,” he added.

The Vice President lauded the series of measures taken by the government for the empowerment of farmers, he said, “Better price discovery mechanisms like the e-NAM portal of the government are laudable initiatives and we should give freedom to farmers to make decisions on when, where and whom to sell”, he added.

Speaking on the need to create awareness among the farmers for diversification, the Vice President said, “Farmers should be encouraged to take up allied activities like horticulture, sericulture, aquaculture, dairy, poultry, and food processing to diversify their sources of income.”

Apart from the cultivation of cereals and pulses, farmers should also be encouraged to grow commercial crops, he stressed.

Expressing concerns that many of our agricultural practices are degrading the soil quality, the Vice President called for reducing the dependence on chemical fertilizers through use of Soil Health Cards.

He also gave the mantra of ‘Innovation, Generation and Motivation’ to farmers so that they could keep up with the changes and uncertainties of time. Elaborating the mantra, he said that technological innovations should be leveraged, next generations must take-up the agricultural challenges and farmers need to be supported and motivated for their great efforts.