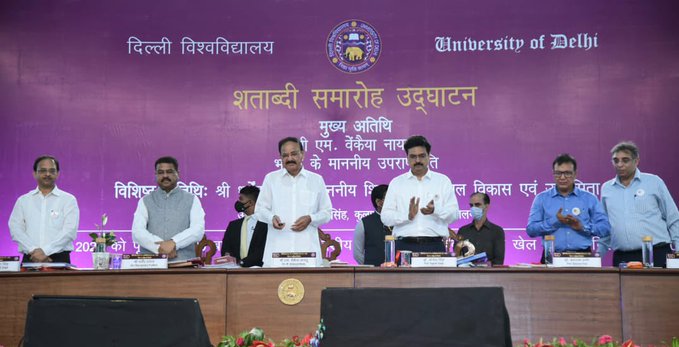 Vice President calls for taking higher education to rural areas to make it more inclusive and equitable Education plays a key role in nation-building and creating a prosperous global future: VP Ultimate aim of the research is to make people’s lives happier and more comfortable: VP National Education Policy (NEP-2020) will revolutionize the educational landscape of the country: VP NEP’s emphasis on imparting education in one’s mother tongue will prove to be a game-changer: VP

This dimension of inclusiveness and equitable access to education to rural youth is critical because education plays a key role in human development, nation-building, and creating a prosperous and sustainable global future, the Vice President stressed.

Speaking at the Centenary celebrations of the Delhi University, Shri Naidu emphasised that Universities must come out with innovative and out of box ideas to address the pressing problems of the society. He also said that the ultimate aim of the research should be to make people’s lives more comfortable and happier.

Pointing out that India has the world’s largest youth population, the Vice President called for harnessing the collective power of our human resources for nation building. Describing the National Education Policy (NEP-2020) as a far-sighted document which is set to revolutionize the educational landscape of the country, he said that its emphasis on imparting education in one’s mother tongue when implemented in schools, colleges and universities will prove to be a game-changer. Calling for providing basic education in a child’s mother tongue, Shri Naidu said the local language must be the main mode of communication in the administration and courts. “Every gazette notification and government order should be in the local or native language so that the common man understands it,” he added.

Shri Naidu reminded the gathering that ancient India had enjoyed the reputation of being a Viswaguru and was a renowned cradle of culture. He said reputed centres of knowledge, among the earliest known to humanity, like the universities of Nalanda, Takshashila, Vikramshila, Vallabhi and Odantapuri bear ample testimony to this fact. Declaring that it is his deep-seated wish to see Indian Universities ranked among the top 10 universities of the world, the Vice President asked all stakeholders to work with this aim in mind.

Ministry of Ayush to celebrate Yoga Utsav to Mark 50 Days…

Documentary Film – PASSPORT MAN OF INDIA based on Dr.…

Observing that education is not merely for employment, he said it was for enhancement of knowledge and enlightenment. Education is a lifelong process of learning and does not end with mere acquisition of degrees. He exhorted the students to dream big, aim high and work hard to succeed in life.

Emphasising the importance of peace for achieving all-round progress, the Vice President said that one would not be able to pay attention to anything if there is tension.

Stressing the need for Indianization of our education system, the Vice President wanted the educational institutions to promote Indian culture and traditional values such as respect for elders, respect for teachers and love for nature. Referring to the increasing frequency of extreme climatic events like the ongoing heat wave, he urged everyone to respect and live in harmony with nature.

Shri Naidu also advised the students to give equal importance to sports and games or yoga for physical fitness and avoid a sedentary lifestyle. He also wanted them to eat properly cooked traditional food as prescribed by ancestors according to our bodily needs and climatic conditions.

Documentary Film – PASSPORT MAN OF INDIA based on Dr. Dnyaneshwar Mulay’s life. He made passport accessible to everyone who wanted it.

Documentary Film – PASSPORT MAN OF INDIA based on Dr. Dnyaneshwar Mulay’s life. He…