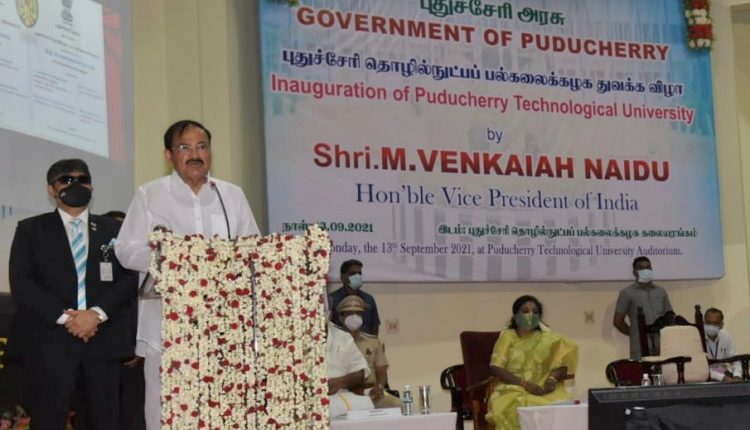 Puducherry: The Vice President, Shri M. Venkaiah Naidu today stressed the need to create an enabling ecosystem for R&D for India to become a developed nation. For this, he urged educational institutions to have an increased interface with the industry to promote result-oriented research that addresses contemporary challenges such as climate change, pollution, health and poverty.

Inaugurating the Puducherry Technological University, in Puducherry today, the Vice President underlined that it is the cutting-edge research in science, technology and other fields that puts developed countries ahead of the rest. He asked the students to conduct socially relevant research and come up with out-of-box ideas to make the nation strong and bring prosperity and happiness in people’s lives.

It may be noted that Puducherry Technological University (PTU) is the first state university of the Union Territory of Puducherry which has been constituted by upgrading Pondicherry Engineering College established in 1986.

Praising the Atal Incubation Centre, set up at the institute, for successfully incubating 15 start-ups in diverse areas such as Electronic Design, Manufacturing and Drone Technologies, the Vice President said that India is scaling new heights in the fields of entrepreneurship and innovation. He expressed happiness over India becoming the world’s third largest start-up ecosystem and said that with the opening of the space sector for private players, several promising start-ups have come up in this sector.

Noting that leadership teams of 45% start-ups have a woman entrepreneur, he hoped that this healthy trend will inspire more women to become entrepreneurs. Emphasizing the need to provide equal opportunities for women, Shri Naidu called for ending artificial barriers created in the name of caste, religion and gender. “You must prepare a generation to see that all kinds of social discriminations are put to an end,” he said to the university authorities.

Terming the huge youth population as the core strength of New India, he urged the educational institutions to infuse a spirit of innovation, entrepreneurship and experimentation among the students so that they are able to drive the nation forward.

Mentioning several government measures to support start-ups such as broadening the definition, simplifying regulations and providing tax exemptions, he exhorted the industry to also come forward and support young entrepreneurs by handholding, providing funds and incubating their ventures. “Improved Industry-Academia Partnership has to be stepped up to give a further fillip in this direction”, he added.

The Vice President also praised the Indian start-ups for coming up with life-saving innovations amid the COVID-19 pandemic such as testing kits and cheap ventilators as well as innovations in supply chain management and logistics.

Observing that the education sector was one of the most affected by the pandemic, Shri Naidu opined that the worst seems to be over and we are looking at the post-COVID recovery. Stating that online education cannot be a substitute for classroom learning, he stressed the need for the students to return to schools and colleges at the earliest. Lauding the world’s largest free vaccination program underway across the country, the Vice President urged the people’s representatives to create awareness among the people on vaccine hesitancy and see that all people in their constituencies get vaccinated.

Complimenting Pondicherry Engineering College for raising the technical education standards, he said that the college has played a key role in the upliftment of the socio-economic status of the UT.

Congratulating the people of Puducherry on getting their first state university, Shri Naidu said it would offer many additional opportunities to excel such as collaboration with international universities and autonomy in starting new courses. He also termed the establishment of PTE as an important milestone in the history of technical education of Puducherry Union Territory.

Recalling the words of great revolutionary Yogi, philosopher and poet, Sri Aurobindo, the Vice President emphasised that education is not merely for building career or earning livelihood, rather its main purpose is to produce disciplined and able citizens committed for the service of the motherland. “Let these lines serve as a guiding light for all of you in your future endeavours,” he told the teachers and students of PTU.

Stressing that our youth must know about the life and works of great leaders like Sri Aurobindo, Subramania Bharati and Chidambaram Pillai, the Vice President called for including their life stories in our school curricula.

Referring to the extreme weather events like forest-fires, floods and heatwaves in the recent past across the world, the Vice President said that climate change is real and called upon everyone to respect and live in harmony with nature.

Following is the full text of speech –

It is a matter of great pleasure for me to be here with you for the inauguration of Puducherry Technological University (PTU). What makes this occasion doubly special is that PTU, constituted by upgrading Pondicherry Engineering College, will be the first state university in the Union Territory of Puducherry. I congratulate the warm-hearted people of Puducherry on this momentous occasion.

Pondicherry Engineering College established in 1986, has steadily grown in all aspects, serving the nation in general and the UT of Puducherry in particular. I am told that at present the institution offers technical education to 2500 students. Now being a university, you will have many more opportunities to excel including collaboration with international universities, attracting industry investment and autonomy in starting new courses.

University of Leeds: Free glasses for pupils with poor…

I am told that the building and infrastructure of the university are enhanced through the funding under Rashtriya Uchchatar Shiksha Abhiyan, a scheme of the Ministry of Education, Government of India with matching grants from the UT of Puducherry. In addition, the institute has been selected under Technical Quality Improvement Programme and has been granted funds to the tune of Rupees Eleven Crores.

I have always emphasized the importance of R&D in all spheres of national development. If you look around the world, you will find that it is the cutting-edge research in science, technology and other fields that puts developed countries ahead of the rest. If we have to make India a developed nation, we will have to create an enabling ecosystem for researchers. I urge educational institutions to have an increased interface with the industry to promote result-oriented research that addresses contemporary challenges such as climate change, pollution, health and poverty.

I am told that Atal Incubation Centre has been set up in this institute to promote Innovation, Entrepreneurship and Venture Development. It is gratifying to know that this incubation centre has incubated 15 startups in the areas of Electronic Design and Manufacturing, and Drone Technologies, among other things.

India today is scaling new heights in the fields of entrepreneurship and innovation. Today, we have the world’s third largest startup ecosystem. Data from the Department for Promotion of Industry and Internal Trade suggests that we have over fifty thousand startups spread across 623 districts in the country. In the year 2020-21 itself, over 16,000 startups were recognized. With the government opening up the space sector for private players, more than 40 tech start-ups are working in the field of satellites, launch vehicles and other space based applications. It is a matter of great joy to know that leadership teams of 45% startups have a woman entrepreneur. This is a healthy trend which will inspire more women to become entrepreneurs.

This is the strength of New India. With 54 percent of Indians below the age of 25, we have the largest youth population in the world. If this young and aspiring population is skilled properly, our youth can drive the nation forward through productive output and innovation. I would urge institutions like Puducherry Technological University to infuse a spirit of innovation, entrepreneurship and experimentation among the students.

The government has taken several measures to support start-ups including broadening definition, simplifying regulations and providing tax exemptions. To provide much needed funding to our start-ups, a Rs 10,000 crore Fund of Funds has also been created. I would urge the industry to also come forward and support our young entrepreneurs by handholding, funding support and incubation. Improved Industry-Academia Partnership is also much required to give a further fillip in this direction.

I am really impressed by the way Indian start-ups innovated when the COVID-19 pandemic struck the world. Over the past one and half years, we saw our youngsters reinvent themselves and come up with testing kits, cheap ventilators, preventive technologies as well as innovations in supply chain management and logistics.

The education sector has been one of the most affected by the pandemic with the teaching and learning process significantly disrupted. But the worst seems to be over and with the world’s largest free vaccination program underway across the country, we are looking at the recovery from the unexpected setback. It is my firm opinion that online education can not be a substitute to classroom learning, and hence, our students must return to schools and colleges at the earliest.

I am happy that the Pondicherry Engineering College has been instrumental in raising the technical education standards in the Union Territory of Puducherry. It has played a key role in the upliftment of the socio-economic status of the Union Territory of Puducherry. The Training and Placement Cell conducts a number of campus placement drives every year and I am told that about 90% of the outgoing students are placed in multinational companies. I compliment you for this.

The establishment of Puducherry Technological University is an important milestone in the history of technical education of Puducherry Union Territory. It is worth mentioning that the institution has secured a reasonable position in the National Ranking by National Institute of Ranking Framework (NIRF).

Puducherry is the land of Sri Aurobindo, the great revolutionary Yogi, philosopher, poet and freedom fighter who remains an eternal source of inspiration for every Indian. It is indeed a proud moment for the entire nation that this year, the auspicious day of August 15 marked two historic events – 75th Independence Day of our country and also the 150th Birth Anniversary of Sri Aurobindo. On this momentous occasion, it is time to revisit the vision and mission of this great Maharishi to seek guidance for our future.

I would finish with these words of Sri Aurobindo from his 1907 address to the teachers and students of the Bengal National College, and in 1907; He said –

“What we want here is not merely to give you a little information, not merely to open to you careers for earning a livelihood, but to build up sons for the Motherland to work and to suffer for her. That is why we started this college and that is the work to which I want you to devote yourselves in future.”

As PTU begins a new chapter in its illustrious history, let these lines serve as a guiding light for all of you in your future endeavours.