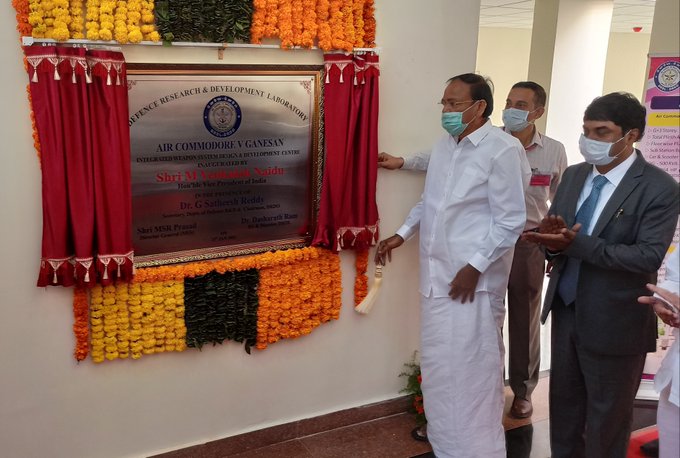 New Delhi: The Vice President, Shri M. Venkaiah Naidu today praised the DRDO scientists and engineers for taking India very close to self-reliance in missile technology with their hard work, dedication and perseverance. “Attaining self-reliance in the defence sector is not only of critical or strategic importance for the country, but is also essential in terms of national pride”, he said.

The Vice President made these remarks while addressing the scientific community after inaugurating two new facilities at Dr APJ Abdul Kalam Missile Complex in Hyderabad today. The Vice President also visited the Exposition of Technologies by Missile Complex Laboratories and said that he was elated to see the indigenous products. “I felt reassured about the security and capability of the country given the tremendous progress made by DRDO scientists in developing self reliant missile technology”, Shri Naidu said. He expressed confidence that Scientists and Technologists of DRDO with their caliber and commitment will make India so self-reliant that Atma Nirbhar Bharat will attain a position where the world will be Bharat Par Nirbhar (dependent on India).

Noting that the Akash missile system has recently been put into the negative list of items for import by the Ministry of Defence, he called it a commendable achievement by DRDO. “It means that India is now self-reliant in this kind of missile system and so the armed forces need not import similar missile systems”, he said.

Referring to the limitations faced by India in having access to high end missile technology of developed countries prior to the signing of Missile Technology Control Regime (MTCR) in 2018, Shri Naidu said that DRDO turned this crisis into an opportunity by developing a range of indigenous missile systems.

Shri Naidu expressed his happiness over the fact that India is now trying to shift its status from being one of the largest importers of defence products to one of the top exporters of defence items. Underlining that India’s defence exports still remain very low despite the recent increase by 7 times, he said that there is a lot of scope in developing defence technologies of export value. He asked the scientists and technologists to not only identify the futuristic defence needs of the country but also the technologies that can be exported.

Referring to the rapidly changing technological landscape, the Vice President asked DRDO to redefine its focus on strategic defence technologies and outsource activities which can be carried out by capable private sector participants. He was happy that DRDO has set up 8 advanced technology centers to carry out research on futuristic military applications. Shri Naidu also wanted the women to be encouraged to participate in the field of science and technology.

Noting that the unprecedented disruption caused by COVID-19 pandemic has affected the people from all sections, particularly the poor, Shri Naidu appreciated Indian government’s response in containing the spread of the virus. He lauded the scientists for coming up with the vaccine in a record time and hoped that very soon the vaccine will reach every citizen of India and the pandemic will end.

Maintaining that India’s fight against COVID-19 tells a successful story of containing the virus, Shri Naidu said that valiant heroes of this fight are the people of India, police forces, medical fraternity, scientists and technologists and providers of essential commodities and services. They supported the national cause wholeheartedly despite facing the risk of getting infected, he added. He also praised the farmers for record foodgrain production despites the challenges thrown by the pandemic.

Recognising that the pandemic has severely affected the economy and livelihoods, the Vice President said that it has also offered us an opportunity to establish our own strength and capabilities. He said that rapid production and export of indigenous vaccines, PPE kits and healthcare systems has demonstrated our strengths in building an Atma Nirbhar Bharat.

He praised DRDO for its wholehearted support in fight against coronavirus by providing many innovative technology solutions. “The establishment of a 1000 bed hospital in just 12 days illustrates the kind of capabilities DRDO has and how quickly it can respond in war-like situations”, he said.

The Vice President appreciated the role of DRDL in India’s Missile technology development ever since its inception in 1961. Mentioning the contribution of stalwarts like Dr. Kalam in the success of Integrated Missile Development Program (IGMDP), Shri Naidu recalled his personal association with the former President and said that he was struck by his simplicity, the depth of his knowledge and his deep desire to make India a Superpower. He was happy that the scientists of the missile cluster of DRDO continue to maintain the legacy of Dr. Kalam and have developed new generation state of the art missile systems.