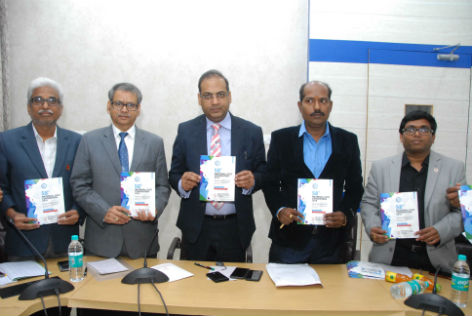 ICAI is the 2nd largest professional body of Cost Management Accountants in the World: Sanjay Gupta, National President of ICAI

Hyderabad, February 24, 2018…… Valuation professionals and Insolvency professionals are said to be in high demand. More and more CAs, Cost Management Accountants and Company Secretaries rushing to get qualified.

CMA professional with their Involvement in cost audit can give early warnings of such scams, said, Sanjay Gupta, the youngest National President of The Institute of Cost Accountants of India while addressing a press conference here in the city on the sidelines of Prathibhotsav, a State Level Convention organized by them for the students.

As Government put up the ecosystem in place in terms setting up Insolvency and Bankruptcy Code that stipulates the needs of insolvency professionals, he added.

Sanjay Gupta addressed a press conference along with his colleagues Chandra Sekhar Rajanala, Chairman of Hyderabad Chapter; Dr. PVS Jagan Mohan Rao VP of SAFA, a forum of professional accountancy bodies which is an apex body of SAARC Nations and others.
Valuation professionals and Insolvency professionals role is more now as banks are trying to resolve or recover bad loans that have long been burdened with, insolvency professionals stand to get a big career boost, Sanjay Gupta informed.

IPA ICAI will grant membership to persons who fulfill all requirements set out in its bylaws on payment of membership fee; lay down standards of professional conduct for its members; monitor the performance of its members; and safeguard the rights, privileges, and interests of insolvency professionals who are its member informed Sanjay Gupta.

Speaking about some new initiatives taken up by the ICAI, he said, they started Forensic Arbitration Course. They have also started a course for Engineers on the basics of Cost Management Accounting for them.

Speaking further he added that the 58th National Cost Convention 2018 would be held at Delhi on March 16 and 17. The two-day meet will be inaugurated by the Vice President of India. 2000 delegates and professionals from across the world are expected to take part the biggest ever CMA professionals meet

During the meet, we would be signing a MoU with National Skill Development Authority to train two lakh people across India in GST in next one year.

ICAI is the second largest CMA Professional body in the world. We are spread over in 12 overseas destinations. We have 80,000 members in our roles across 97 chapters in India. Nearly five lakh students are pursuing CMA education in India, Sanjay Gupta informed.