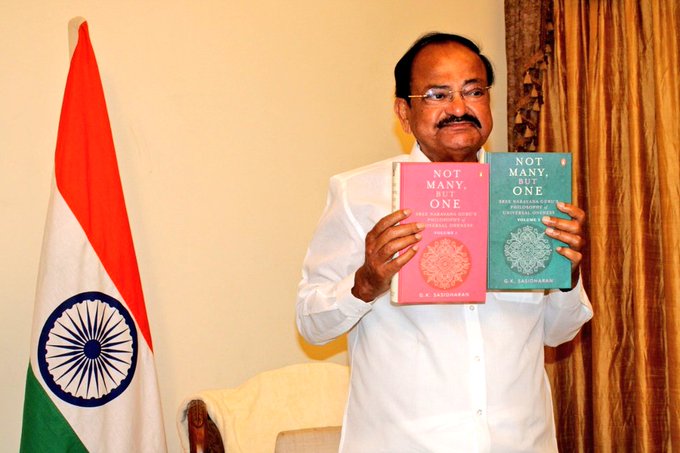 Vice President launches book of poems of Sree Narayana Guru, ‘Not Many But One’

New Delhi: The Vice President, Shri Venkaiah Naidu today suggested that the Indian worldview of ‘Vasudhaiva Kutumbakam’ can show the way for the contemporary problems facing humanity. In a global context where the social fabric of many countries and communities are being eroded by hatred, violence, bigotry, sectarianism and other divisive tendencies, the age-old Indian philosophy of ‘Universal Oneness’ has a special relevance, he observed.

Exhorting that there is quintessentially a democratic ethos in the Indian way of life, Shri Naidu said we see each individual as important as another. He added that our civilizational values recognize the vibrant variety in human beings and that there is no inherent conflict in this diversity as we are part of the same ‘divinity’. The Vice President suggested that such a world view brings about mutual respect, peaceful co-existence and collaborative effort to achieve progress sustainably and inclusively.

Shri Naidu was making these observations during the virtual book launch of “Not Many, But One” (Two Volumes), an English translation of poems of Sree Narayana Gurudev by Prof G.K. Sasidharan. Recalling the saint’s enormous influence on modern India, the Vice President said Sree Narayana Guru was “was a multifaceted genius, a great Maharshi, an eloquent proponent of Advaita philosophy, a talented poet and a great metaphysician”.

The Vice President further highlighted the role of Sree Narayana Guru as a remarkable social reformer. He was at the forefront of the temple entry movement and against the social discrimination of untouchables. Consecrating a Siva idol amidst protest from bigoted traditionalists, he provided the impetus to Vaikom agitation and drew nationwide attention and appreciation from Mahatma Gandhi. Sree Narayana Guru also emphasized the practice of ideals of cleanliness, promotion of education, agriculture, trade, handicrafts and technical training as a part of the Sivagiri pilgrimage, Shri Naidu noted.

The saint guru believed that the world was permeated by one universal spirit, a common divine energy that resided in every human being and creature in this universe, the Vice President remarked. He captured this essence of Indianness in his poems and underlined the unity that lies beneath the world’s apparent diversity. “For Narayana Gurudev, there is only “One Caste, One Religion, One God for All” (Oru Jathi, Oru Matham, Oru Daivam, Manushyanu)”, Shri Naidu said. This philosophy formed the basis for his reform movements, which sought to remove inequalities and social distortions.

The Vice President described Sree Narayana Guru as one of the most influential saints of modern India, who had propagated India’s unique vision of harmony, peaceful coexistence and respect for diversity. Shri Naidu also spoke of his genius for intuitively knowing the potential of science and technology. He noted his contributions to metaphysics as a mystic contemplating the origin of the universe and quoted a few examples of his mystic insights.

Appreciating the efforts that have gone into producing the two volumes by the author and the publisher, Shri Naidu said that books like these can contribute to a deeper understanding of the roots of India’s civilizational values. The readers in India as well as across the globe will get a glimpse of the extraordinary universality and the breadth of Indian vision, he added.

Shri Naidu concluded by suggesting that we have to discover and rediscover such innumerable gems by delving into our rich treasure house of cultural history. He urged the youth of the nation to go through publications such as this and understand the underlying message. Through this, he hoped that the younger generation will ‘appreciate the soul of India’ in this process and become a generation that is ‘more aware of its inheritance’. “No nation can move forward by forgetting its culture and heritage”, the Vice President reminded.