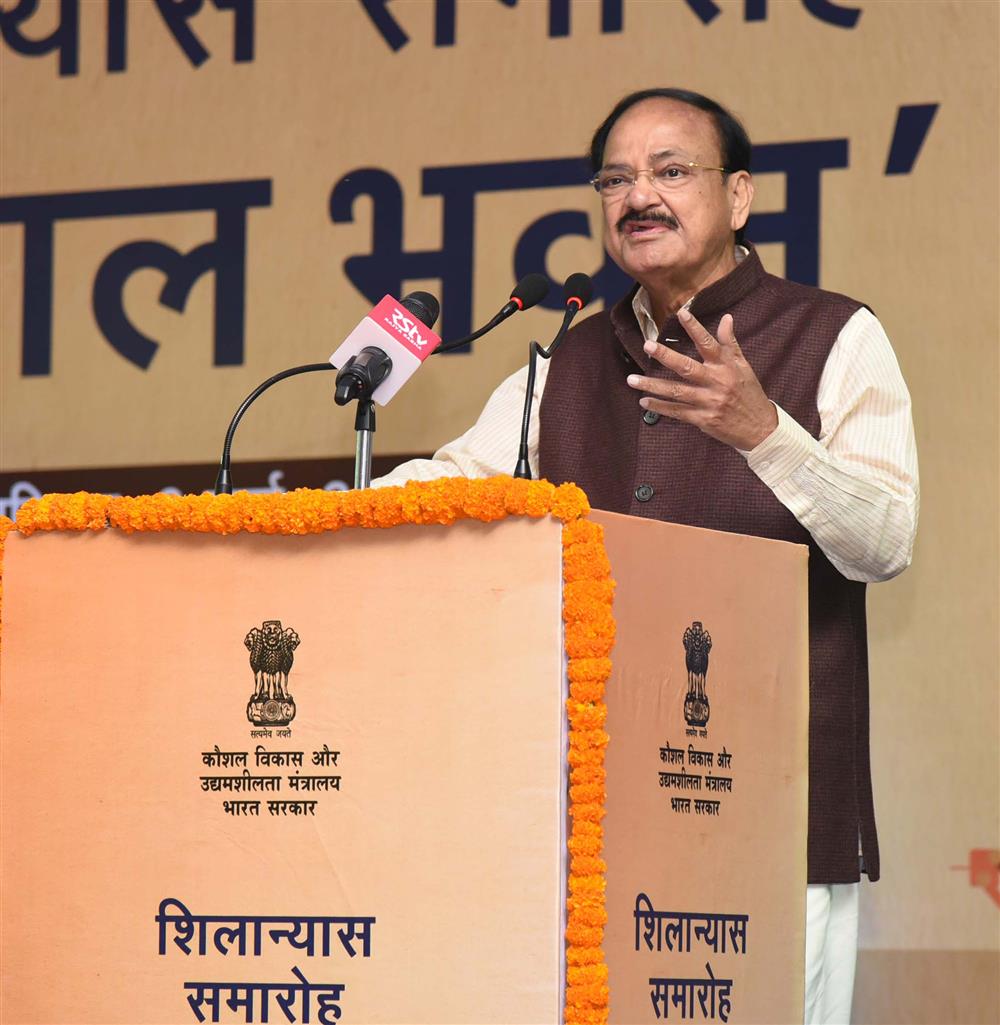 Kaushal Bhawan will be coming up on a plot of 1.354 Acre in New Moti Bagh, New Delhi. Being built at the cost of about Rs 172 Crore, it will comprise of 3 basements and 8 floors above, consisting of modern offices, auditorium, mini convention centre, training rooms, yoga hall, crèche, sports facilities and Gym. It is imagined as a future ready building, with state of the art Building Management Systems. The new office building of the Ministry of Skill Development and Entrepreneurship, which will be ready in 18 months, shall fulfill the objectives of safe, convenient and efficient work environment. The building will be energy efficient and use solar energy for common area and exterior lighting.

Shri M. Venkaiah Naidu, speaking after laying the foundation stone, said that India is young and aspirational as 65% of the population is below 35 years of age. There is 48 crore workforce in the country, and 1 crore more are added every year. He said that getting demographic dividend for India is a unique opportunity as well challenge. Skills and knowledge are driving forces of economic growth and development, and hence they need to be updated regularly and effectively. The Vice-President said that International agencies have increased India’s ratings and rankings on various parameters, and job opportunities are galore in different sectors. There is need to equip people to the demands of market and time so that the opportunities can be utilized. Besides, the entrepreneurial spirit of our people need to be harnessed, by upgradation of skills and imparting of knowledge. Shri Naidu said that skill needs to be imparted to 40 crore people. Being a mammoth task, it requires dedication and sustained efforts.

Minister of Skill Development & Entrepreneurship and Petroleum & Natural Gas Shri Dharmendra Pradhan narrated the large progress made by the youngest ministry of the Government of India. He said that within 5 years of its establishment, the Ministry of Skill Development & Entrepreneurship has brought about a paradigm change in the sector, by upgradation of skills and talents of large number of people. Shri Pradhan described it a pleasant coincidence that the plot for the Kaushal Bhawan was allotted during the tenure of Shri M.Venkaiah Naidu as the Urban Development Minister, and now the Foundation stone is also being laid by him. He said that new office building will not only be modern and full of facilities, but will also reflect positivity. He said Kaushal Bhawan is designed to usher in new work culture, which should contribute in building new India.