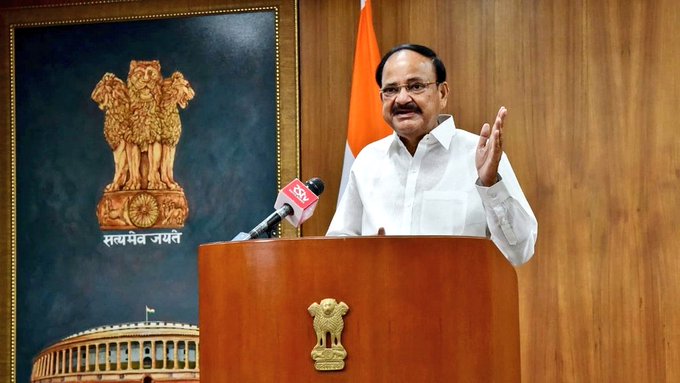 Delhi:  Vice President of India, M. Venkaiah Naidu will be the Chief Guest for the inauguration ceremony of the Amrit Mahotsav celebrations of the Hansraj College Foundation Day on July 26, 2022. Prof Rama, the college Principal, informed the reporters of the details of this program. She said that alongside the Indian Vice President, the program will be attended by eminent dignitaries including Prof Yogesh Singh, Vice Chancellor, Delhi University, Padma Shri Dr. Punam Suri, President, Hansraj College Management Committee, Dr Shiv Raman Gaur, Treasurer, Hansraj College.

The inauguration ceremony of the Platinum Jubilee celebrations on 26th July marks the beginning of a series of academic and cultural events to commemorate this special year. Hansraj College, one of the foremost institutions affiliated to the University of Delhi, was founded by the DAV organisation on July 26, 1948. The first President of India, Bharat Ratna Dr Rajendra Prasad inaugurated the current campus of the college. In the three quarters of our illustrious history, the college has been contributing to nation building in all spheres of activity be it academics, sports, culture, politics or industry among many others.

The college Principal informed the reporters that the commemoration of the Amrit Mahotsav of the college Foundation Day will begin with the unveiling of a statue of Mahatma Hansraj in the college campus and mark the beginning of a range of academic and cultural events. The college plans to invite eminent scholars for the Mahatma Hansraj Memorial Lecture series through the year. In order to promote social awareness, the college plans to set up centers for the conservation of the environment, women development, human resource development and wellness and rehabilitation within the campus. Making the celebrations of 75th year of its Foundation even more special is the plan to felicitate 75 of the college alumni in acknowledgment of their contribution to the corporate life of the institution.
She further informed the reporters that the college will fund 25 research projects to be carried out by the faculty members and organise 75 seminars, conferences and workshops in the various departments and societies of the college at the national and international levels. The college also plans on conducting cultural programs, competitions and allied activities through the year.

Moreover, this year the college also plans to organise ‘Rashtriya Ekta Samagam’, ‘Rashtriya Khel Samagam’, ‘Pustak Mela’ and ‘Bhartiya Bhasha Sammelan’. Additionally, an art gallery will be constructed in the college campus this year and the college plans to mount a special exhibition commemorating 75 years of its journey as an institution. Mahatma Hansraj Platinum Jubilee Scholarships in the fields of education, sports and extra-curricular activities will also be awarded to students of the college.

The college Principal reiterated her commitment to the task of building a strong foundation for its students and has been making continuous effort to that end in recent years. This year will witness the inauguration of a new Science block, Canteen and a Research Centre in the college.
The principal informed the reporters that the college library, auditorium, amphitheater, laboratories and other main structures will be named after illustrious thinkers from India. The college has always been keenly aware of its national and social responsibilities. As a part of the ‘Gynan Setu Pariyojna’, Hansraj College will extend its guidance to regional colleges in remote parts of the country in order to enhance the quality of education and the direct their growth as institutions.

The college also plans to insure all its students through group insurance. In order to promote research, innovation and skill development amongst the students, the college will ensure their ready access to cutting-edge developments in various fields of knowledge.