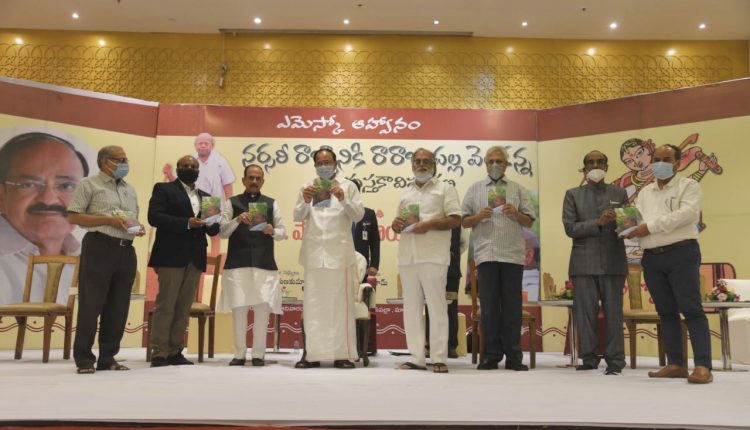 In particular, Shri Naidu called upon the youth to proactively lead environmental movements from the front and motivate others to adopt sustainable practices. They should drive the point among people that “If we take care of nature, nature in turn will take care of mankind”, he said.

Shri Naidu was speaking at the book release of ‘Nursery Rajyaniki Raraju’, a book on the life story of the late Shri Palla Venkanna, who is credited with transforming the village of Kadiyam in Andhra Pradesh into a popular hub of plant nurseries.

The Vice President expressed his appreciation for Shri Venkanna for his tireless efforts towards a ‘Green Bharat’. He said that Shri Venkanna, who collected over 3000 varieties of plants from around the country, believed that ‘if every home can turn green, the country as a result will turn green’. Shri Palla Venkanna’s life story remains an inspiration to future generations, Shri Naidu remarked.

Noting the effects of rapid urbanisation and deforestation, Shri Naidu said that there has been an increased frequency of extreme weather events in recent times such as flash floods and landslides in different parts of the world. ‘These are clear signs that climate change is real and it cannot be business as usual anymore’, he said.

To mitigate such weather events, Shri Naidu said that, going forward, it is imperative that we co-exist harmoniously with nature. We must balance our developmental needs with environmental protection and make sure everyone understands the importance of sustainable living. “Meaningful development is possible only when it takes into account the cost on environment”, Shri Naidu added.

On the occasion, he lauded the Telangana government for taking up plantation of trees as a movement under ‘Haritha Haram’. He suggested that all the state governments should take initiative in creating awareness among the children about environmental protection and tree plantation from the school level.