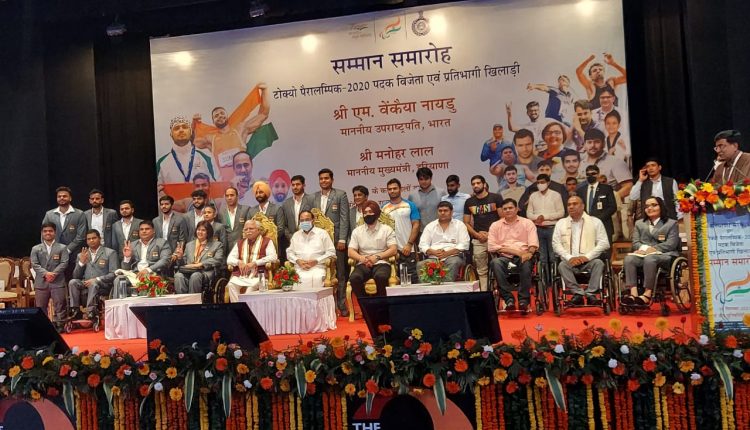 Gurugram: Vice President of India, Shri M. Venkaiah Nadu today felicitated the Paralympic Games-returned successful athletes of Haryana, at The NorthCap University, Sector-23, Gurugram. The event was presided by the Chief Minister of Haryana, Shri Manohar Lal in the presence of S. Sandeep Singh, The Minister of State for Sports & Youth Affairs, Haryana.

During the event the Govt. of Haryana distributed the cash reward of Rs. 6 Crores to the Gold, Rs. 4 crores to Silver, and Rs. 2.5 Crores to the Bronze medal winners along with a Govt. job to honor the Athletes for their immense contribution to the field of sports. The Govt. also distributed a reward of Rs. 50 Lakhs and 15 Lakhs to the players who performed extremely well in the Tokyo Paralympics 2020.

During his speech, at the felicitation ceremony held at The NorthCap University, Gurugram, The Vice President of India, Sh. M. Venkaiah Nadu said “It’s my immense pleasure that I received a chance to felicitate the winners of the Tokyo Paralympics 2020. The athletes have created a history and made all of us proud. The entire nation complements and salutes them for their enormous contribution in the field of sports. I feel honored while honoring the athletes.”

While addressing the future athletes, the Vice-President also urged the youth to focus on their physical fitness.

At the Felicitation ceremony, The Chief Minister of Haryana, Shri Manohar Lal said, “Our Paralympic players are a source of inspiration for the entire society. Leaving the weakness of their bodies behind they have reached the top of their game and won a medal for our country.”

Further talking about his ambitions, he said, “Our players have won a lot of medals but there is still one hurdle left. Our country is very low in the medal tally of Olympics and Paralympics however, we have to take the country to the top from there. For the next Olympics, we have set a target of 100 participants from Haryana and winning 50 medals. The goal is to bring maximum medals for the country without worrying about the budget.”

Apart from representatives of the Central and the state government, the felicitation ceremony was also attended by many young students who aspire to become an athlete and families of the Paralympians. Senior dignitaries like Prof. Nupur Prakash, Vice-Chancellor, and Col. Bikram Mohanty, Registrar from The NorthCap University also attended the event.