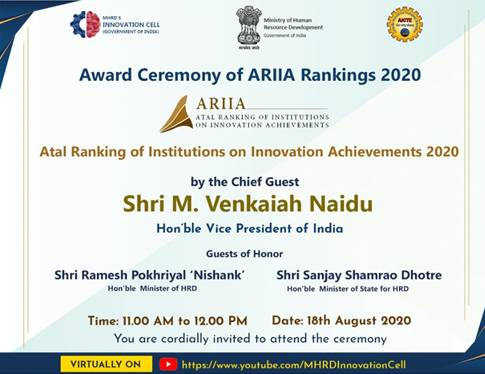 New Delhi: Atal Rankings of Institutions on Innovation Achievements (ARIIA) 2020 will be announced by the Vice-President of India Shri M. Venkaiah Naidu on 18th day of August 2020 in esteemed presence of Union Minister for HRD, Shri Ramesh Pokhriyal ‘Nishank’ and Union Minister of State for HRD Shri Sanjay Shamrao Dhotre. The announcement ceremony will be virtual and will be attended by Secretary, Higher Education Shri Amit Khare and the dignitaries from government and non-government organizations and higher education institutes.

ARIIA is an initiative of Ministry of HRD, implemented by AICTE and Ministry’s Innovation Cell, Government of India to systematically rank higher education institutions and universities in India on indicators related to Innovation, Startup and Entrepreneurship Development amongst students and faculty.

Prof. Anil Sahasrabudhe, Chairman, AICTE, highlighted that the world is observing a noteworthy improvement in performance of India in Global Innovation Index ranking. In last 5 years, India has risen 29 spots in Global Innovation Index from 81 in 2014 to 52 in 2019. AICTE believes that in the years to come, India will make a true impact on global innovation with the initiatives taken by Ministry of HRD in this direction. He adds that ARIIA focuses on quality and quantity of innovations coming out of the education institutes and measures the real impact created by these innovations nationally and internationally.

As per BVR Mohan Reddy, Chairman, ARIIA evaluation committee, new India is changing and education institutes are participating in this change by encouraging innovative technologies. ARIIA is a framework that measures this change happening in our education system.

ARIIA will set tone and direction for institutions for future development and making them globally competitive and in forefront of innovation, mentioned Dr. Abhay Jere, Chief Innovation Officer, MHRD’s Innovation Cell. ARIIA ranking will certainly inspire Indian institutions to reorient their mind-set and build an ecosystem to encourage high quality research, innovation and entrepreneurship in India.

Last year, during ARIIA 2019, top 10 institutes in ‘Public funded’ and 5 institutes in ‘Private and self-finance’ categories were declared and highest ranked institutes were felicitated by the President of India on 8th April, 2019 at Vigyan Bhawan, New Delhi.