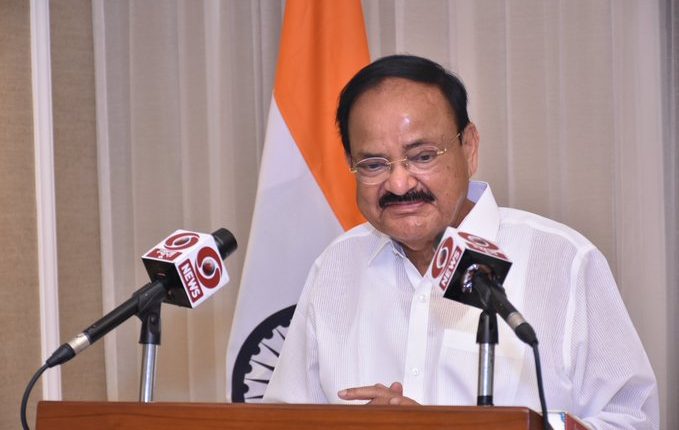 Citing a UN Food and Agriculture Organization (FAO) report about an impending global food crisis, he said that if we provide timely assistance to our farmers, India would not only remain self-sufficient but also feed the world in the years to come.

Praising our farmers for increased food grain production last year despite the severe hardship caused by the pandemic, Shri Naidu said there was a need to focus on increasing the storage capacities, remove restrictions on crop transportation and encourage food processing to make agriculture more remunerative.

“Farmers need to focus on cost-cutting along with increasing production. We also need to utilize our resources such as water and electricity more judiciously”, Shri Naidu added.

Releasing the book ‘Palleku Pattabhishekam’ by former MP Shri Yalamanchili Sivaji at Dr Marri Channa Reddy Human Resource Development Institute in Hyderabad, the Vice President said that villages and agriculture are intrinsically connected and we must address their issues holistically to bring ‘Gram Swarajya’ to our villages.

He also suggested the creation of strong lab-farm links to ensure fruitful outcomes to the farmers. He urged scientists to develop climate and drought-resistant seed varieties.

Referring to the growing urban-rural divide, Shri Naidu said that villages should not be seen as mere ‘factories supplying food to the cities’. In order to achieve Gandhiji’s dream of ‘Gram Swarajya’, he called for a renewed national effort through collaboration of civic society, agriculturalists, agronomists, students and researchers to make agriculture profitable and villages thriving economic hubs.

He wanted people to return their roots and work with fellow villagers on solving long-standing problems.

With rising costs of inputs in agriculture, Shri Naidu suggested natural and organic farming offers great potential in cutting down costs and generating a steady income for farmers. He added that the increasing demand for organic products provided an opportunity to farmers to take up natural farming in a big way.

Shri Naidu also wanted farmers to diversify into allied sectors such as poultry, dairy farming, fisheries, horticulture, aquaculture and pisciculture to ensure regular income. He observed that farmers who diversify their production are less likely to face losses when the crop fails.

Speaking on the role of youth, the Vice President called for greater participation of the new generation in agriculture – as farmers, researchers, scientists and entrepreneurs. He also highlighted the crucial role of media in advancing Indian agriculture. He called for more farmer-centric magazines and channels that can inform the farmers on the best and emerging practices in the field.