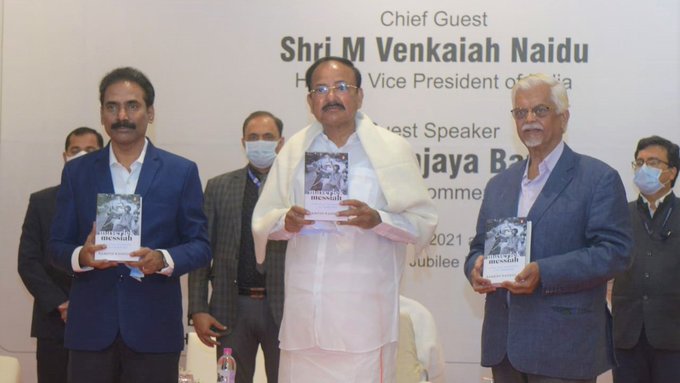 Releasing a book, ‘Maverick Messiah’, a political biography authored by senior journalist, Ramesh Kandula, the Vice President said the political landscape underwent a profound change after NTR’s arrival on the scene. “Power, in NTR’s case, was truly drawn from the people”, he added.

He said the author quite rightly pointed out that NTR redefined the political culture in the then united Andhra Pradesh and scripted a new political idiom.

Shri Naidu said that NTR ranked among top pioneers of ‘alternative politics’. His entry into politics and his ‘dramatic’ success within about nine months of floating a regional party gave a new direction to national politics.

NTR’s sub-nationalism was constructive and his brand of regionalism celebrated the pluralistic idea of India. His fight for strengthening the federal character of the Constitution and the emphasis he laid on the welfare role of the government remains relevantin today’s India when regional aspirations are on the rise, the Vice President observed.

He said that NTR emerged as an effective defender of federalism and regional aspirations given the dent they suffered under single party dominance in the country for a long period. ‘He was making a point and a case for a proper balance between the powers of the States and the Centre”, the Vice President said.

Shri Naidu said that NTR’s contribution to the Opposition unity at the national level was a pioneering effort. In this context, the Vice President said that a healthy, sound and constructive opposition in a democracy would be relevant at all times.

Pointing out that NTR had pioneered radical and far-reaching legislative and administrative initiatives, he said his first legislative initiative was the Upa-Lok Pal Act demonstrating his keenness to end corruption that was eating into the vitals of the society and State. “He empowered women with property rights and political representation and introduced reservations for BCs in Zilla Parishads. His 2 rupees a-kilo rice turned out to be the front-runner in welfrism”, Shri Naidu added. The Vice President however cautioned that the thrust of welfarism should be to economically empower people rather than merely focusing on only populist schemes.

Observing that as an actor NTR was a legend, he said “It is universally acknowledged that no other film actor could essay a role from our Puranas—as varying as those of Lord Rama, Lord Krishna, Arjuna, Karna, Duryodhana or Ravana, for example, with the grace, ease, felicity and depth that NTR could lend to the performance”.

Recalling his election to the State Assembly from Udayagiri Assembly Constituency in 1983, Shri Naidu said that he was one of the few candidates who could withstand the TDP tsunami led by NTR.

Stating that NTR saw himself as a messiah who could transform the socio-political landscape in Andhra Pradesh and beyond, the Vice President said that NTR was essentially well-intentioned and good at heart. “His entry into politics was not driven by a self-serving lust for power and much less by envy or overvaulting ambition”, Shri Naidu added.

Recalling his long and close association with the late leader, the Vice President said that he used to share a special bond with NTR and that he was in the front ranks of the Save Democracy movement following the “unjustifiable dismissal” of NTR Government in 1984 and the campaign for its restoration.

The Vice President praised the author for charting the course of some of the biggest upheavals in Andhra Pradesh politics objectively and with the insight of a seasoned observer. He finally stressed the need for bringing out more books on different facets of NTR.