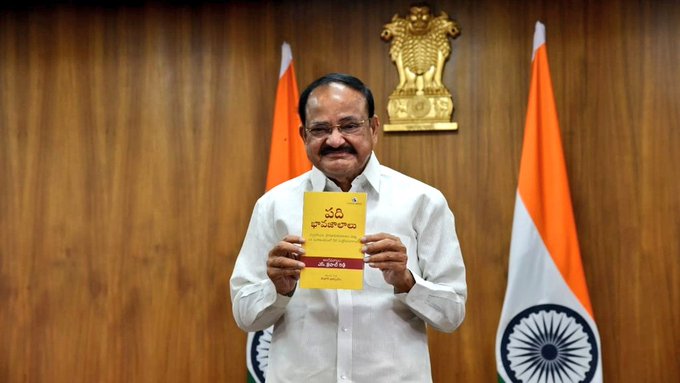 Releasing online a Telugu book, ‘Padi Bhavajalalu”, a translation of the English book “Ten Ideologies- The great asymmetry between agrarianism and industrialism”, written by Shri Jaipal Reddy, the Vice President described the late leader as a rare politician, who was popular across the political spectrum.

He stayed in public life for decades without ever compromising his ideological outlook and personality, VP said.

Recalling his long association with Shri Jaipal Reddy, the Vice President said that right from the time when they used to share the same bench in the Andhra Pradesh Assembly to both of them becoming spokespersons of national parties, they had shared a special bonding.

Although they belonged to different parties and ideologies, their friendship never faced any hurdle, he said.

Highlighting the strong pro-people philosophical perspective in Shri Reddy’s speeches, the Vice President called him an analyst who deeply studied literature, philosophy, and the economic theories of different countries and saw politics in the light of that study.

Speaking about Shri Reddy’s sincerity and seriousness towards legislative work, Shri Naidu said that he used to deeply study the issue and come out with logical observations before speaking in the assembly or parliament on it.

“That is why he was recognized as one of the best parliamentarians of our times”, he added.

Talking about the book that deals with different aspects from democracy to capitalism to environmentalism and globalization, Shri Naidu expressed happiness that Shri Reddy gave prominence to nationalism.

He buttressed Shri Jaipal Reddy’s view expressed in the book that the distinctive geography of the country has influenced poets and philosophers to emphasize the cultural unity of India since time immemorial. Since Vedic time to the present, India has always been perceived to be a single cultural entity, the Vice President said.

Reminiscing his personal bond with his dear friends, Shri Naidu said, “When Jaipal wrote this book in English he met me personally and presented it to me. But it saddens me that he is not here today with us when we release it in our mother tongue, Telugu”.