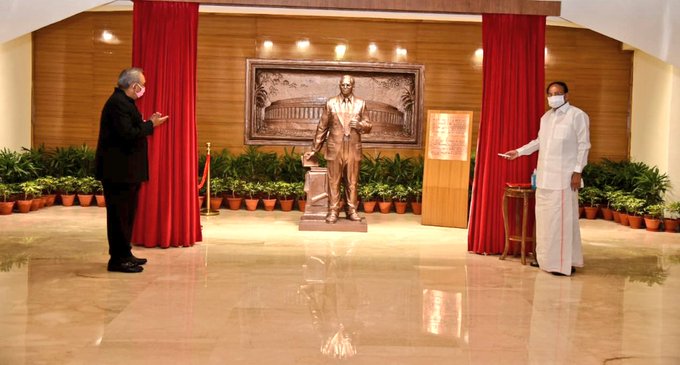 Vice President Unveils the statue of Babasaheb Dr. B R Ambedkar at premises of office of the Comptroller and Auditor General (CAG)

New Delhi: The Vice President today termed corruption as the major malaise affecting the growth and development of the country and called upon the government, civil society and the people at large to work together to stamp out the menace of corruption from the nation. He was addressing the gathering after unveiling the statue of Babasaheb Dr B R Ambedkar at premises of office of the Comptroller and Auditor General (CAG) in New Delhi today.

Observing that India had one of the most robust Constitutions in the world, Shri Naidu lauded the stellar contribution made by Dr Ambedkar in drafting the Constitution and the pioneering role he played in guiding the nation at a critical juncture.

The Vice President said that to this day, our constitution remains a sacred book and a guiding beacon on all matters and asked every citizen of the country to strive to ensure that the sanctity of our Constitution is upheld at all times and never violated.

Observing that Dr Ambedkar was the messiah of the oppressed, the Vice President said that all through his life, he strongly believed in gender equality and emancipation of women through education and strove to dismantle the caste barriers and ensure equality for all people.

“The purpose of installing his statue is to remind us the ideals of this great man and to see that present and future generations remember his teachings which are guiding principles for everyone of us”, he said.

Applauding the CAG for being a strong and credible institution, the Vice President credited the framers of our Constitution, particularly Dr Ambedkar for ensuring independence and wide mandate to the CAG. He added that the core values of the CAG—independence, objectivity, integrity, reliability, professional excellence, transparency and positive approach—drew inspiration from the life and work of Dr Ambedkar. He called accountability, transparency & good governance as very essential for the democracy.

The Vice President credited the reports of the CAG and the consequent deliberations in the committees of the legislatures for having led to various changes in the regulatory framework, governance structures and delivery mechanism of the government, ensuring economy, efficiency and effectiveness of government operations.

Shri Naidu also complimented the CAG for acquiring an excellent reputation amongst the international community of Supreme Audit Institutions (SAI) and for its endeavour to become a fully paperless office by 2022.

IIM Calcutta is poised for a complete transformation of its existing 135 Acre campus located at Diamond Harbour Road, Joka, Kolkata