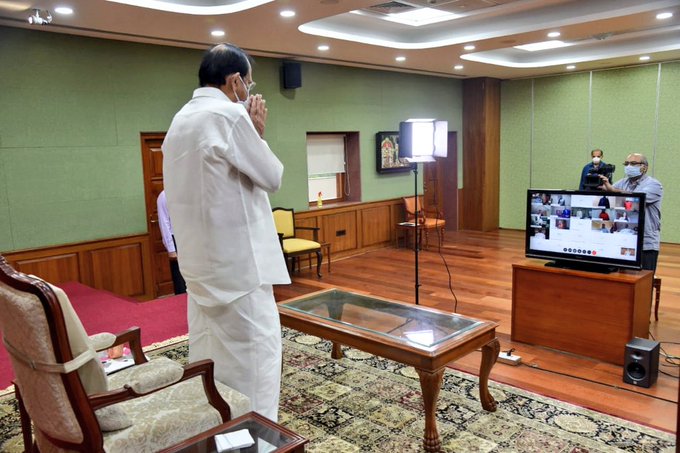 New Delhi: Vice President of India M. Venkaiah Naidu has highlighted the virtues of learning and mastering one’s mother tongue even as he urged the people to learn other languages to the extent possible for a wider understanding of cultural diversities and value systems. He further said that learning other languages also fosters wider bonding of humankind besides enhancing opportunities of various kinds.

Addressing online the participants in the ‘World Telugu Cultural Fest’ being organized in San Francisco, the USA today, Shri Naidu stressed that language is more than a mere instrument of expression. He elaborated that language is manifestation of culture and a system of values over a long period of time and it epitomizes the personality types typical to respective cultures. Every language is an outcome of an evolutionary process drawing from other languages during the long period of interaction with others, he observed.

The Vice President noted that every civilization conveys itself in the languages of its people as products of historic, social, economic and physical contexts. Shri Naidu said that language in essence answers the basic question of “Who Are You?” thereby meaning that an individual is an expression of culture and a system of values. He stressed that “language is the principle source of identity of an individual and hence, very important.”

Games24x7 ropes in Hrithik Roshan as the brand ambassador of…

Noting that a common language fosters unity and community development, Shri Naidu urged the people to learn as many languages as possible for a broader understanding of the diverse cultures. He called for extensive cultural and linguistic exchanges for transforming the mindsets and perspectives.

The Vice President said; “Religion is a pathway to individual salvation. Culture is a practical guide to the way of living towards that goal. Language, as an intrinsic element of culture, accordingly assumes importance in shaping one’s life. Accordingly, sages and philosophers advocated using right words and correct language. That is why I say, you are what your language is and vice versa.”

Games24x7 ropes in Hrithik Roshan as the brand ambassador of RummyCircle