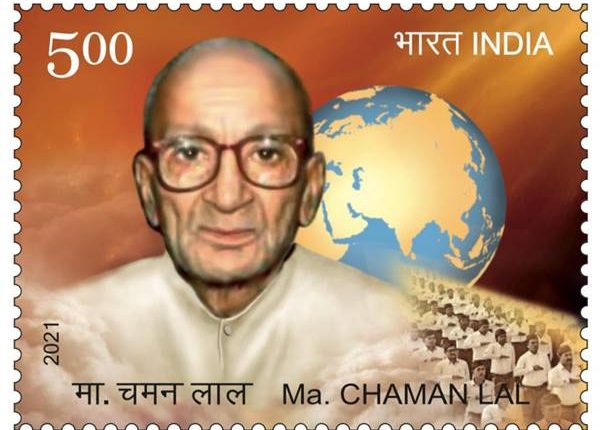 This Commemorative Postage Stamp highlights the life & work of Mananiya Chaman Lal, renowned social worker and Sangh Pracharak. Born on 25th March, 1920 in Sialkot(now in Pakistan), Mananiya Chaman Lal from a young age was enthused to work for the welfare of people. Although he was a Gold Medallist with many lucrative job offers, still he chose to work for fulfilling the basic needs of people who were victims of partition of India. Through his perseverance, passion and hard work, he created an institutional mechanism for helping the Indians abroad and was instrumental in fulfilling the various strategic goals of foreign policy of India.

Speaking on the occasion, Vice President said that Mananiya Chaman Lal was an Indian Saint in true sense, who believed and practised the philosophy of share and care. He always put nation first and self last in all his actions. He said that, he was instrumental in initiating and fulfilling the dream project of creating a global network on the Sangh and was responsible to facilitate the Indians going abroad. The Vice President also said that postage stamps are an excellent source of authentic information on our history, especially for next generation citizens.

Shri Ashwini Vaishnaw, Union Minister of Communications, Railways & Electronics and Information Technology said that Mananiya Chaman Lal had deep and spiritual connect with all Indian descendants. The Union Minister shared an anecdote, where in the year 1992, then President of Mauritius, Shri Aniruddha Jagnauth delayed the marriage of his son till Mananiya Chaman Lal ji attended iit Minister also said that his lifestyle was so simple that after washing his clothes, he used to dry them without wrenching, so that no ironing is required. The Minister lauded the efforts of Department of Posts for various initiatives to identify and facilitate Unsung Heroes of India as a part of “Azadi ka Amrit Mahotsav”.

In the release function, a Commemorative Postage Stamp, a First Day Cover (FDC) and an Information Brochure were also unveiled. The stamp issued today is a tribute of Department of Posts to Unsung Heroes of India and is a part of the initiatives of the Department for Azadi ka Amrit Mahotsav Programme.

The Commemorative Postage Stamp, First Day Cover (FDC) and Information Brochure would be available for sale at Philatelic Bureaux situated in every corner of the country as well as can be ordered online via e-postoffice (Visit : https://www.epostoffice.gov.in/).

Leiden University: Conventions: the oil in the engine of the state system

iednewsdesk Jun 17, 2022
The world’s first study of the impact of childhood fitness and obesity on cognition in middle age, followed over…