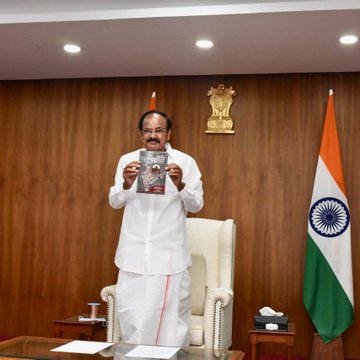 New Delhi: The Vice President Shri M. Venkaiah Naidu today said that the ultimate test of good governance is the improvement in the quality of life of the people. Democratic governments should be close to people, be very responsive to their needs and adopt a caring and facilitative role, he said. Noting the difficulties encountered by the common citizen in public offices, Shri Naidu suggested that essential services should be streamlined and citizen charters, like RTI, must clearly specify the time within which any service can be availed. “Getting basic services should not be a struggle for the common man”, he said.

Releasing the book ‘Bringing Governments and People Closer’ by Dr M. Ramachandran, Former Secretary to Government of India, Shri Naidu said that the expectations of the people boil down to “easy, transparent, hassle-free” systems and procedures in public offices, as outlined by the author. He also agreed with the author that inordinate time-taking processes are the main reason people get hassled in public offices. Suggesting that this should change by better streamlining, he also called for greater accountability and time-bound disposal of grievances, using mechanisms like Centralized Public Grievance Redress and Monitoring System (CPGRAMS). He also welcomed the author’s suggestion of introducing a new ‘ease of common man’s interaction with government index’.

Shri Naidu also stressed the need for more ‘trust based governance’, in order to improve facilitation of services. Complimenting the government for the improvements in this regard, he noted that self-attestation is deemed sufficient for many documents now, as are digital documents. He cited the instance of tax reforms, which brought in faceless assessment and appeals, eliminating the physical interface between tax authorities and taxpayers.

Shri Naidu also observed that technological advancements have brought governments closer to people. With initiatives like Digital India, Aadhar-linked bank accounts, the use of geo-tagging to monitor schemes like Swachh Bharat, technology has proved to be a game-changer in governance, he said.

While calling for more such innovations, the Vice President stressed that due attention must be paid to not exclude even a single citizen. In this regard, he suggested the extensive use of more Indian languages in all aspects of governance. Languages understood by people must be used in offices, schools, courts and public places, he underlined.

Advocating an ‘outcome-oriented approach’ to governance, the Vice President called for bridging the gap between the Government’s intent and implementation. For this, he advised the Governments to measure the quality of their service delivery and to act on this feedback. He noted the adoption of this real-time outcome-measurement approach in the DISHA platform for schools and the Saubhagya portal for rural electrification, among others. “Core mantra thus should be to transform ‘vision to mission’ and ‘mission to implementation’ in the least possible time and in the most efficient way”, Shri Naidu said.

Underlining the importance of reforms in governance, he said reforms have implemented in letter and spirit by all the stakeholders. The objective of reforms, he said, is to perform better in public life and bring a transformation in people’s lives.

Noting corruption as a major factor in impeding service delivery, the Vice President said that it is possible to eliminate corruption in public offices only through a streamlining of procedures and greater accountability to the public.

Commenting on governance issues in urban areas, Shri Naidu suggested that we must create happy living spaces for all classes of society in a city, along with infrastructure. The focus should be on ‘liveability’, he said. As regards rural areas, he said major governance issues pertain to obtaining copies of land records, matters pending in courts, assured electricity, delay in pensions and access to healthcare and education. He also highlighted the notable initiatives like the digitization of land records, improved road connectivity, access to cooking fuel through Ujjwala Yojana that are making ease of living in our villages better by the day.

Shri Naidu also talked about importance of decentralization and devolution of powers to local bodies. Referring to the 73rd and 74th constitutional amendments, he called for more effective devolution of listed 29 subjects to the local bodies.

Speaking about the role of legislators, he suggested that they should take initiative in reviewing the implementation of the policies, highlight efficiencies and deficiencies, and make suggestions in the legislatures.

The Vice President also recommended that the best governance practices be shared, given publicity and replicated widely. He urged the Central and State governments to make a comprehensive documentation of governance practices and projects implemented so as to gain insights into successes and failures. This will make way for better implementation elsewhere, he said.

Shri Naidu called for working together towards meeting the 21st century aspirations of the people and making Indian governance a global model. He also suggested making citizens active partners in national development, noting the importance of people’s involvement in programmes like Swachh Bharat and the country’s response to COVID-19. “Good governance becomes a reality when people are seen not merely as recipients of benefits but as agents of change”, he said.