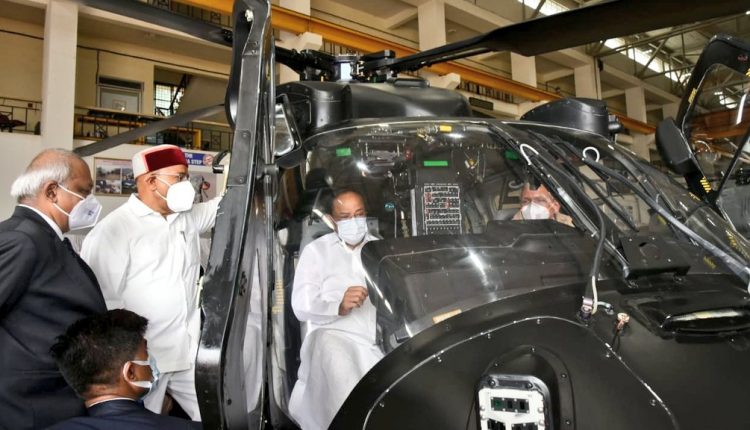 Addressing scientists and engineers of Hindustan Aeronautical Limited and Aeronautical Development Agency at HAL complex, Bengaluru, the Vice President said that indigenous products will play a key role in leapfrogging India as an Aerospace and Defence powerhouse in the coming years.

While noting India’s capability to manufacture the state-of-the-art missiles, satellites and space vehicles, he said, “the paradox remains that we are still among the largest arms importers in the world”. He called for changing this situation by quickening the pace of indigenous development of critical technologies.

Drawing attention to multiple security challenges faced by the country due to a highly complex geopolitical environment, the Vice President lauded the security forces for their exemplary courage and professionalism. “It is our duty to ensure that our armed forces are fully equipped to handle any challenge and repel any security threat firmly”, he said.

The Vice President said that India wants friendly relations with all its neighbours but some countries are funding and supporting terrorism against India and some harbour expansionist tendencies. “Therefore, security and safety of our borders is very important for the peace and prosperity of the nation”, he added. Stressing that India has never been expansionist in its outlook, Shri Naidu said that our approach is of peaceful coexistence and to deter the forces of terror and disruption. “India wants to become strong for the progress and development of its people,” he said.

Referring to several policy initiatives by the Government to promote indigenization and self-reliance in defence manufacturing, Shri Naidu underlined the need to involve private partners in defence projects for fruitful results. “We will have to depend on strategic partnerships, technology sharing and teamwork to ensure that we build competitive products which are comparable with the best from across the globe”, he said.

He said that measures such as an increase in the FDI limit for the defence sector, the decision to set up two defence corridors in UP and Tamil Nadu and notification of two positive indigenization lists by the Ministry of Defence offer a great opportunity to the Indian defence industry.

Praising the involvement of a large number of Indian companies with the HAL in the recently concluded deal for 83 Tejas fighter jets by the Indian Air Force, the Vice President said that such projects have the potential to transform the Indian aerospace manufacturing ecosystem into a vibrant Atmanirbhar-self-sustaining one.

Noting that the innovation process in the Aerospace industry involves high levels of risk and costly investments, he opined that this process can be accelerated through active collaboration between the industry and researchers. Emphasizing the need to attract the brightest minds in R&D in the aerospace and defence sectors, Shri Naidu called for creating a synergy between academia and industry for developing an ‘Aerospace Hub’. “This would promote innovation and address the issue of skills shortage in this key sector,” he said.

Earlier in the day, the Vice President visited HAL’s LCA Tejas manufacturing facility and expressed his appreciation to scientists and engineers of ADA and HAL for building this state-of-the-art modern fighter aircraft. He expressed confidence that the 4+ generation aircraft would be a potent platform to meet the operational requirements of the Indian Air Force.

The Vice President lauded the stellar contribution of HAL and DRDO laboratories to national security and expressed confidence that with designing of more potent aircraft like the LCA Mk2, Advanced Medium Combat Aircraft (AMCA) and Twin-Engine Deck Based Fighter (TEDBF), the country would no longer have to be dependent on foreign nations to meet its fighter aircraft needs.

Stating that HAL’s growth has been synonymous with the growth of the Aeronautical industry in India, he reiterated that self-reliance in defence and aerospace technology was important to create a ‘Samarth Aur Saksham Bharat’ (Able and capable India).He said that he felt proud and reassured of the capabilities of Indian researches after visiting this visit to HAL facilities.

Drawing attention to impending ‘digitization of manufacturing’, he said that it would bring profound changes in the aerospace sector and exhorted HAL to brace up and adapt to Industry 4.0. He also underlined the importance of ensuring customer satisfaction for HAL to emerge as a global player in the aviation space.

Recognizing the need to unleash the power of innovation to find solutions to our various challenges faced by mankind, Shri Naidu stressed that our economic development agenda needs to be socially and economically more inclusive, regionally balanced and environmentally sustainable.

Governor of Karnataka, Shri ThaawarchandGehlot, HAL Chairman, Shri R.Madhavan and senior officials and scientists from HAL and ADA were present on the occasion.