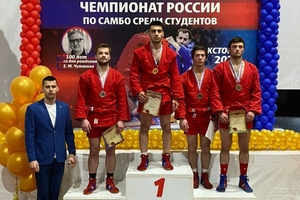 Victory of PetrSU students at the Russian Sambo Championship

Gold and bronze medals were won by Karelian sambo wrestlers at the Russian Sambo Championship among students in memory of the Honored Coach of the USSR, Professor E.M. Chumakov.
The competition was attended by 238 athletes from 74 universities.

The bronze medalist was Robert Moiseenko in the weight category up to 58 kg.

Both wrestlers are pupils of the Olympic Reserve School No. 5 in the city of Petrozavodsk and students of the Institute of Physical Culture, Sports and Tourism of Petrozavodsk State University. Congratulations to the athletes with a worthy performance at the Russian Championship. Such success is another confirmation of the excellent training of the wrestlers, the leading positions of the Karelian SAMBO school in Russia.