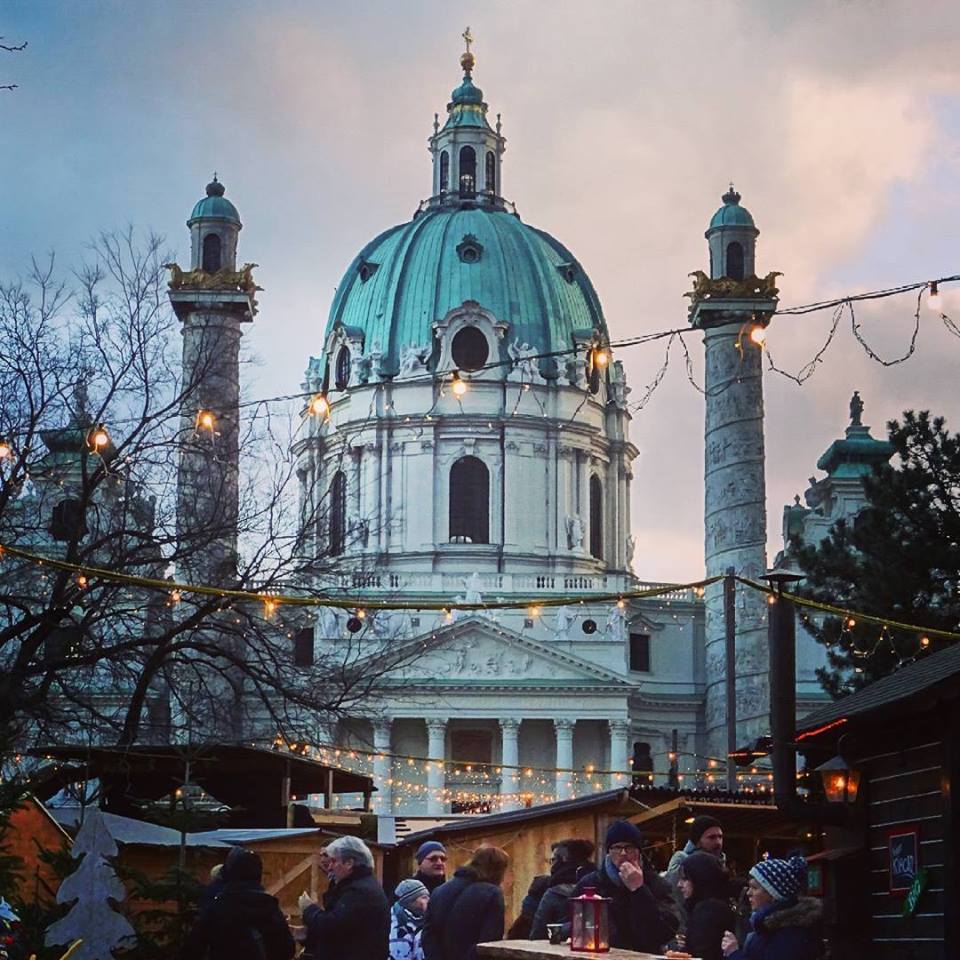 Vienna is ready to welcome Indian families in 2018

New Delhi: If you are looking to holiday in Europe, why not begin at its heart – in the Austrian capital of Vienna? For centuries Vienna commanded a special place as the nucleus of Europe, forming a natural gateway between Western and European parts. Even today, this multidimensional city by the lovely Danube river, that is just a seven hours flight from India, is a charming cultural conduit to the rest of Europe, with diverse offerings. Reason enough for a growing number of Indians to choose a Viennese Vacation.

“The positive and welcoming attitude of the people of Vienna has helped to ensure visitors have delightful experiences and return to their homes with wonderful memories. We look forward to welcoming more Indian families in Vienna in 2018”, says Ms Isabella Rauter, Public Relations Manager, Vienna Tourist Board.

Vienna is where you can step back into history one moment, revel in nature the next, lose yourself in the music of the masters for hours or relax over stimulating conversation in one of the city’s bustling cafes.

But the unique thing is children are anything but forgotten on a Viennese holiday. This is one of the strongest reasons the city’s tourism is buoyed up. The number of activities there for the picking would far exceed what is possible to take up on a vacation.

EN FAMILLE, IN VIENNA
A must-visit for kids and grown-ups alike is the Schönbrunn Zoo, the oldest in the world. The animals are so carefully looked after they are comfortable enough to be playful and active, allowing visitors to see them up close and watch them for hours. Schönbrunn is one of a handful of zoos worldwide lucky enough to be entrusted with giant pandas. The endangered bears are a smash hit among visitors.

Throughout the year children aged 6 and above are treated to themed tours of the Schönbrunn Palace state rooms dedicated to Empress Maria Theresa and her children, among them Marie Antoinette, Queen of France. This magnificent residential castle, with its sweeping gardens, fountains and statues is a symbol of the Austro-Hungarian monarchy and is an awe inspiring sight for visiting families who are fascinated by the lavish and opulent interiors of the palace. Children can also find out for themselves what life was like for the young Habsburgs first hand and even dress up like royalty at the Children’s Museum at the palace.

Aside from the palace, there are dozens of exceptional museums in the city including the Natural Science museum where one can learn and enjoy oneself at the same time. Museums set up special activities such as children’s theatre and art appreciation through fun activities that further stimulate young minds.

For Indian families, there is a variety of activities to appeal to the diverse type of people visiting. Family amusements include the Prater amusement park – known locally as the Wurstelprater – is brimming with around 250 action-packed attractions, including the Eisberg attraction, a unique interactive journey through an icy wilderness.

Music is the soul of Vienna and a visit to the House of Music is a must at the very least. Here, a hands-on journey of discovery through real and virtual rooms takes place on five floors and gives visitors the chance to experience music with all the senses as part of the kids special tour. The grand finale is the chance for young visitors to conduct the Vienna Philharmonic virtually.

Jaipur-based Nandita Bedi had this to say about her recent family trip to Vienna, “One travels to build experiences and stories and to interact with other cultures and Vienna proved to be truly enriching on that count. We spent four days in Vienna and it turned out to be a fun family holiday with diverse activities to please each one of us. From the slow enjoyment of a sacher torte at a cafe to the rumbustious fun of an amusement park, to a leisurely glide through history at the palaces and museums to the grandiosity of an opera performance it was a thoroughly satisfying trip. The fact that we could make sorties to nearby Prague and Budapest added to the experience for us.”

THE ART LOVER’S VIENNA
Vienna has special plans for the year. Over 2018, Vienna will celebrate Modernism and four of the era’s chief protagonists. The painters Gustav Klimt and Egon Schiele, the architect Otto Wagner and the universal artist Koloman Moser all left an indelible mark on Vienna since 1900 and their life and work will be remembered at over 30 exhibitions and events during the anniversary year. Then as now, Vienna was a vibrant hub for the arts and the creative community.

Countless new developments in art, literature, architecture, psychology, philosophy and wider society were shaped by ‘Wiener Moderne’ or Viennese Modernism between 1890 and 1918 was a fascinating time in the Habsburgs era of Austrian history. The two World Wars too sparked off revolutionary thinking in all areas of life generating works such as Klimt’s portraits of women, Schiele’s unflinching self-portraits, Moser’s designs, Sigmund Freud’s psychoanalysis, Arnold Schoenberg’s twelve-tone music, Gustav Mahler’s modern symphonies. The city will be taking an in-depth look at the masterpieces of these and other exceptional artists of Modernism, giving tourists another reason to visit.

A two-horse carriage ride is as much a part of Vienna as St. Stephen’s Cathedral and the Giant Ferris Wheel: the fiakers. For many tourists, a carriage ride is the cosiest way to explore Vienna’s attractions. Vienna is where you can step back into history one moment, revel in nature the next. A visit to the Zoo and the Prater are among the biggest draws for families travelling with children.

Newest attraction: Following extensive renovations, the Vienna World Museum (Weltmuseum Wien) now shows valuable treasures from around the world, including the collection of seafarer James Cook and the world-famous feather headdress of a Mexican priest. With its global collection, the museum deals with the cultural diversity of humanity and documents Austria’s rich historic relations with the world with its global collection.

MICE SESTINATION
With more than 3,500 conventions and corporate events a year, Vienna is one of the world’s leading meeting destinations, as well as continually receiving awards for its outstanding quality of life.

A number of accredited guides have put together special tours that take the theme for 2018 as their point of departure. English-speaking guides are available for all the tours. The city is safe even for women and solo travellers.

Vienna is also the starting point for trips along the Danube to Salzburg in Upper Austria, Bratislava in Slovakia, or Budapest in Hungary. The Vienna-Prague-Budapest Golden Triangle is the perfect holiday combo.

Egon Schiele, The Jubilee Exhibition: Schiele’s paintings, works on paper and numerous archive pieces will be on display.
When: February 23-November 04, 2018
At: Leopold Museum

Otto Wagner: The Wien Museum is dedicating the first major exhibition to this “world capital architect”.
When: March 15-October 07, 2018
At: Wien Museum

THE VIENNA CITY CARD
Experience the city’s imperial history, magnificent palaces and gardens with the low-cost Vienna City Card for 24, 48 or 72 hours. Available from the Vienna City Card app or the online shop as well as in most hotels, Tourist Info Counters at the airport, main station and Vienna Info counters.

Or the Vienna City Card with Big Bus Vienna (white card) that includes the Hop-On Hop-Off tours of Big Bus Tours (€28.00/€31.00/€35.00), one child up to 16 years of age can ride along for free. With these cards, additionally, enjoy more than 210 benefits – from museums to Heuriger wine taverns.

HOW TO GET THERE
Air India offers a thrice-a-week (Wed, Fri, Sun) direct flight from Delhi to Vienna and back. For those embarking from Mumbai, Kolkata, Chennai, Hyderabad and Bangalore leading airlines — Air India, British Airways, Emirates, Etihad, Lufthansa, Swiss, and Turkish — offer connections with just a small stop en route.

Mrs. Renate Brauner, Councillor of Finance and Economic Affairs, has been serving as the President of the Vienna Tourist Board since March 2007. The position of Director of Tourism is held by Mr. Norbert Kettner since September 2007. The Board of Directors (officially: The Tourism Commission) consists of the president, two vice presidents and 15 additional members, the latter mostly assigned by the City of Vienna. The Vienna Tourist Board is financed by local taxes on hotels in Vienna, the general city budget and its own revenues.