New Delhi:The European Union and African states have a fundamentally different understanding of migration – what conflicts does this cause?

In July 2020 Germany took up presidency of the EU Council. Top of the agenda, as announced by president of the European Commission Ursula von der Leyen when she assumed office at the end of 2019, is passing a new EU pact on asylum and migration in the second half of the year – in order to shape migration sustainably in future, with “a human and humane approach”. Key to the success of this pact will be good cooperative relationships with African states – and recognition by the EU of African views on migration. A team headed by Dr. Franzisca Zanker at the Arnold Bergstraesser Institute of the University of Freiburg has interviewed numerous people who are involved in migration policy about this. Dietrich Roeschmann spoke with the political scientist and her colleague Leonie Jegen about the results of the research project The Political Economy of West African Migration Governance.

Ms Zanker, the word ‘migration’ gives rise to fear of a serious threat among many in Europe, who think that millions of African migrants are simply waiting to travel to Europe illegally as soon as possible. Is this a good start to a constructive dialog?

Franzisca Zanker: No, on the contrary. This European idea of migration as a problem that has to be solved makes any honest dialog about potential shared strategies to deal with migration more difficult. It disregards any views on the subject that don’t fit in with the European interest in control, containment and repatriation. But the pressure to migrate will continue to grow in Africa, not least because of the growing population. We will only be able to cope with the challenges connected with this together.

In your research you studied the different points of view of migration and migration policy in Africa. How did you do this?

Franzisca Zanker: We were interested in the question of the social, political and economic importance of migration in Africa. To do this we conducted field studies in Nigeria, Gambia, Niger and Senegal – the first two countries are English speaking, the others are Francophone, and their colonial histories are correspondingly different. They have one thing in common: all four states are important countries of origin or transit on the way to Europe. But even if migration along this route increases it shouldn’t be forgotten that more than 80 percent of migration flows in West Africa continue to take place within the region itself. 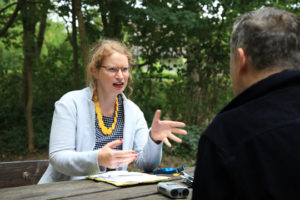 And are therefore largely ignored by Europe?

Leonie Jegen: Yes. In addition: migration has in fact never been a politically significant issue in West Africa, it’s normal. People go where there’s work. So until now in most African countries there have been hardly any institutions or programs that regulate migration. But since the EU is hugely interested in containing migration from Africa and is willing to pay a lot of money for this, things have changed. The subject is now highly politicized, and projects funded by external sponsors have triggered broad reform processes in this field.

How do opinions of migration differ in individual states?

Franzisca Zanker: It varies a lot. Take Nigeria for example: There has been a very high level of migration from there to Europe and the USA for decades. Often they are highly-educated people who work in well-paid jobs and send some of their pay back home to their families in Nigeria. In 2019 this inflow made up about six percent of the gross domestic product (GDP). As a result, Nigeria’s interest in endangering this income by cooperating with the EU is limited. And this is even more so the case for Gambia, where remittances from Gambians who live abroad currently make up 15 percent of GDP. During the 22-year dictatorship of Yahya Jammeh, many states froze their development aid, so remittances made up a substantial part of foreign income in Gambia. Today, three years after the end of the dictatorship, the share of development aid has risen significantly and is now 16 percent of GDP. For the government this is a tricky balancing act, because they always have to offset the bonanza from the EU with their own domestic interests in migration.

Franzisca Zanker: Cooperating with Europe can lead to governments having serious problems of legitimacy in their own countries. Gambia is a good example of this too. The EU entices with development aid and demands in return that the country creates the conditions for the return of rejected asylum seekers. In Gambia however there are few opportunities for those who return. So since early 2019 the Gambian government has declined to take in Gambian nationals who are deported from the EU. This decision suddenly propelled tiny Gambia into the focus of international migration policy. The government fell between two stools – on the one hand the EU threatened to cut development aid, on the other were large parts of the population that benefit from the high level of remittances. In the end the moratorium was lifted after ten months.

Leonie Jegen: Another example is Niger, currently the poorest country in the world. From migration research we know that the poorest of the poor do not come to Europe by illegal means. They simply don’t have the money for people-smugglers. This is one reason why only a very few people leave Niger for Europe. Official statistics on remittances from Niger migrants are consequently small – they make up barely three percent of GDP. However as one of the most important transit countries for migration to Europe, Niger is an important partner for Europe. The EU used the country’s precarious situation by promising the Niger government an increase in development aid, provided they would cooperate in return in the fight against people-smugglers and illegal migration in Africa. The first step was the anti-trafficking act passed in 2015.

Since 2017 Niger has been Europe’s premium partner in containment of migration from Africa. Externalizing their borders cost the EU and Germany almost one billion euros. Most of the money flowed into the security apparatus, while at the same time far more people died along the migration routes. How do rulers justify such deals?

Leonie Jegen: Really it always confronts them with massive problems of legitimacy. Then there are other challenges. In glaring contrast to the attention paid to fighting people-smuggling is the worsening state of displacement in the country, arising from conflicts in the Sahel and Libya. As a result, the poorest country in the world is sheltering a growing population of refugees under difficult conditions.

Why doesn’t the EU pay attention to African interests? Wouldn’t it make everything a lot easier?

Franzisca Zanker: Naturally everyone in the EU knows that there are differing interests. But it’s my impression that they aren’t really listening. As part of our research project we spoke to more than 130 people from politics, from government institutions, NGOs and civil society. Time and again they told us that EU representatives aren’t willing to see migration as anything but a problem. It doesn’t matter that the people in most African societies have a different, more complex understanding of migration.

So many African states are taking a two-pronged approach: negotiate with the EU and at the same time conclude bilateral agreements. What advantages do they see in this?

Franzisca Zanker: The increase in bilateral agreements has a lot to do with the EU’s indecisive policy about asylum and migration. It’s harder to find a common denominator amongst 28 states than to focus on pursuing your own interests in direct negotiations with one partner nation. So France and Spain are in talks with Senegal, Germany with Gambia. The more states that are involved, the harder the negotiations – with problematic consequences.

Franzisca Zanker: If the EU gives money, for instance, to strengthen borders in West Africa and thus cut back the escape routes, this quite significantly hits regional migration and the right to freedom of movement which the African Union reaffirmed as recently as 2018. So African governments face a difficult situation. At the same time, everyone involved must ask themselves: What borders do we want? How should we set them up so as to manage to counter terrorism and people-smuggling in the long term, without interfering with normal migration channels?

The conclusion to your study is clear: secure migration channels are needed to get a grip on illegal migration.

Franzisca Zanker: Unfortunately they’re too often played off against each other. On the European side there is the demand to repatriate rejected asylum seekers. On the African side however there is massive interest in legal possibilities for migration to Europe. The EU says rulers in Africa should cooperate better first of all, then we’ll give them legal migration channels. This predictably leads to conflict, because this discussion is not between equals. African partners feel they aren’t being taken seriously. But without them the EU couldn’t act.

Talk on Government Aid and Support for Start-ups