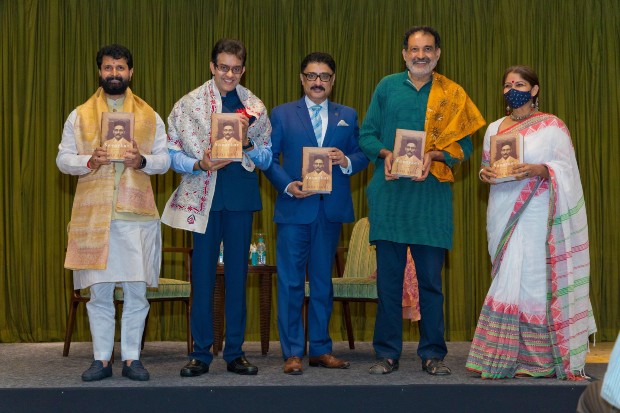 Mumbai: Well known author Vikram Sampath launched “Savarkar – a Contested Legacy”, the concluding volume of the Savarkar Biography series on Monday the 16th of August at the Taj West End. The event was organised by Prabha Khaitan Foundation and Kitaab -Books.

The book was unveiled by Sri CT Ravi, current National General Secretary of Bharatiya Janata Party, and Sri Mohandas Pai – Chairman, Manipal Global Education. It was live streamed on Youtube as a covid precaution and was attended by a very small group of people following the covid protocols.

There was a conversational discussion on the book by Vikram Sampath and Vasanthi Hariprakash followed by Q and A from the audience. Vikram spoke at length on his journey of writing the first book and the concluding book of the series.

ABOUT THE BOOK “SAVARKAR: A CONTESTED LEGACY”

Decades after his death, Swatantryaveer Vinayak Damodar Savarkar continues to

uniquely influence India’s political scenario. In this concluding volume of the

Savarkar series, exploring a vast range of original archival documents from across

India and outside it, in English and several Indian languages, historian Vikram

Sampath brings to light the life and works of Vinayak Damodar Savarkar, one of the

most contentious political thinkers and leaders of the twentieth century. The book

begins where the first volume ended, in 1924, with Savarkar’s conditional release to

Ratnagiri. It takes us through the strenuous social reforms that he undertook in

movement. As the president of the All-India Hindu Mahasabha, Savarkar was a

counter to Gandhi and the Congress, opposing stoutly the Partition of India till the

very end. After Gandhi’s murder, Savarkar was charged as a co-conspirator in the

assassination. While he was acquitted by the court, Savarkar is still maligned as

debated. The book draws on voluminous archival material to debunk the canards that

the murder of Gandhi, through exhaustive documentation. It ends with Savarkar’s

his name and legacy.

Robo journalism is a reality of today’s media: Shashi Shekhar