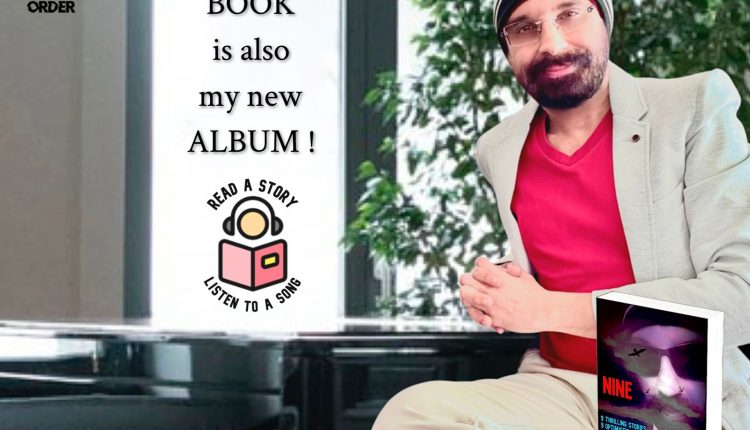 Vineet Singh Hukmani is the first Asian/Indian to achieve a series of accomplishments on global radio charts in 2021, along with multiple Grammy submissions, among the other achievements that his releases have brought him recently. The genre-agnostic artist has not only been receiving decent airplay on global radio platforms but has also proven his mettle by securing top slots across different regions & genre charts — from pop and indie, to rock, funk & hip-hop. An electronics engineer by education, Vineet is also the former MD and founder of India’s only International format radio station – Radio One.

Looks like a couple of record hitters in the last year weren’t enough for the Harvard Business School alumnus, who decided to pivot to an even richer experiential concept with his latest offering titled ‘Nine’ which releases globally on March 25th, 2022. Call it a thrilling book with a soundtrack or a multimedia book that showcases 9 stories combined with 9 tracks, ‘Nine’ is a one-of-a-kind concept that features a buoyant new self-titled single along with 8 of the artist’s chart-topping number 1 tracks.  The QR codes are embedded with each of the stories which have titles inspired by the track names, namely: Nine, Dreaming Out Loud, Turning Back Time, Hurry, So New, I Pray, Where’s The Fun and Jab The World.

Nine: 9 thrilling stories. 9 Optimistic songs is the artist’s attempt to make his music more immersive for his audience. He elucidates, “While I tasted success with a world record for my 9 singles, reaching the number 1 position in the European charts I felt the music had untapped potential in the immersive space. It is an artist’s endeavour to make their art more memorable to their audience. I am a musician at heart but I discovered that there are stories embedded in my music that need to be told. I combined two of my passions, music and movies and merged them into a book that also plays the songs. It’s a culmination of what I feel for my music and how I have craved to tell the hidden stories within them. And what is now remaining, is a prayer, that the concept is appreciated by readers and music lovers.”

While Vineet enjoys a good action thriller with a twist he also enjoys the concept of mythical entities in cinema making appearances in the lives of normal everyday folks. Many people enjoy this genre of cinematic storytelling and that is the tone of each of the Nine Stories. The essence or core of each story is borrowed from the genre-agnostic artist’s songs. For example the song ‘Dreamin Out Loud‘ is about dreaming of winning, that is also the essence of the story, however the characters, the backdrop, the twists and ending have been crafted to entertain the reader. “Once a reader reads the story and listens to a song, the immersive experience is complete,” Vineet adds.

Vineet is also founder of greatsong.world, a foundation that trains artists from Asia on how to produce & place great quality music on radio in the US and Europe and also helps artists discover e-music earning strategies and on how to compete for top level world awards like the Grammys & Eurovision.