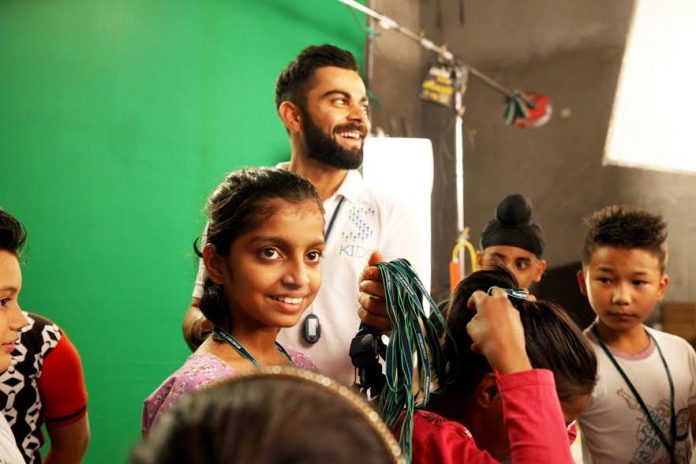 Mumbai: ‘Do It Now’ is Indian cricket captain, Virat Kohli’s, mantra for India’s kids. Alarmed by the statistics published about the state of our children’s health, the fitness icon is appealing to children to play more, and have more fun by joining Stepathlon Kids, which launches in November this year.

Stepathlon Kids is India’s first and only gamified mass participation health platform, co-founded in June 2016 by Virat Kohli, Cornerstone Sport & Entertainment (CSE) and Stepathlon. Stepathlon Kids focuses on getting children active, eating right and staying healthy and has been designed to be inclusive and fun for any and every child between the ages of 8 and 12.

Ravi Krishnan, CEO & Co-Founder, Stepathlon, explains, “It’s never too early to begin teaching good habits. We want to build a fitter, healthier and happier India.” As a father himself, he adds, “We want to encourage kids to regularly ‘switch off’, get up and play. We’re not saying no to technology, but we need to educate parents and kids how to embrace technology responsibly. It’s all about balance.”

Stepathlon Kids is a 30-Day Race where kids compete in teams to take as many steps as they can each day which are tracked through their ‘Stepathlon Kids BUDD-E Pedometer’. The steps they take and activities they do in the real world are then converted to the distance they cover in the Stepathlon Kids virtual world. As the kids move through this world, they will be encouraged to ‘Play, Learn, and Share’ to earn incentives, rewards and recognition. Kohli’s influence will be evident in both the real and virtual world as a motivator and mentor.
Krishnan believes the partnership with Kohli will encourage and inspire children across the country, “It’s not just for aspiring cricketers – we want to reach out to Ballerinas in Bangalore, Chess Players in Chennai, Artists in Agra, Gamers in Guwahati – every child in India deserves the right to be healthy. We want to build a fitter, healthier and happier India.”

India’s health statistics are alarming – pollution, overcrowding, processed and fast food, multiple screens and cultural obstacles have combined to create concern of an epidemic. By 2025, India will be the diabetes ‘capital’ of the world. 10 million Indian kids are reported as obese every year. Recent reports in a leading magazine (please mention the name of the magazine) stated that 68% of Indian kids don’t exercise regularly and the BBC reported that children watch six hours of ‘screen time’ each day which adversely affects cognitive development and brain function.

The current state of the nation’s health is a huge concern for Kohli. “It is very important to encourage children to adopt healthy eating habits, and improve their health and fitness by indulging in more outdoor activities. This is exactly why we started Stepathlon Kids. I have personally and professionally benefited from making health changes in my life. Children are the future -the healthier and more balanced children are, the smarter and better prepared they are to build our nation. This is why we have to act today – why we have to “Do It Now!”” 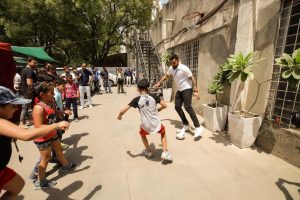 Krishnan adds, “Virat Kohli is an inspirational partner. He is personally committed to a healthy lifestyle and now will lead India, not only on the field, but off it as well.” Krishnan also pointed out, “We are in discussions with a number of brands, and partners that see the vision that we all have for Stepathlon Kids and want to be part of the solution to creating a happier, healthier and more productive India.” Kohli has been instrumental in driving the initiative along with his partners Stepathlon Lifestyle and Cornerstone Sports & Entertainment (CSE).

Bunty Sajdeh, CEO of Cornerstone Sports & Entertainment (CSE) added, “Virat and all of us at Cornerstone are passionate about promoting a healthy lifestyle among kids. The advent of the digital age has been great for development but has led to children spending all their time indoor and in front of a TV or on a mobile phone. This is our first initiative to help kids work toward a healthier tomorrow and urge all parents, teachers to support our cause.”