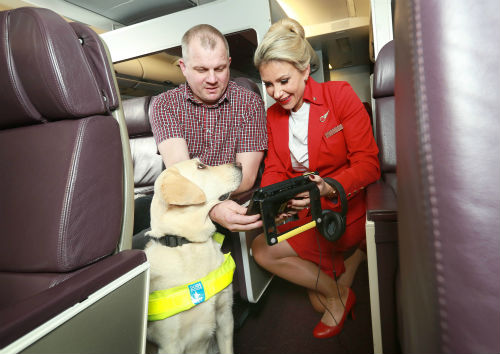 New Delh: Virgin Atlantic has announced a global airline first, as it launches a fully accessible inflight entertainment system for customers with sight loss. The technology will be offered throughout its fleet serving destinations across North America, the Caribbean, Africa, China, India and the Middle East.

Televisions in the sky have come a long way since the days of a single TV at the front of the cabin with seat back touch screen entertainment now commonplace across the industry. However, while this is a benefit for many, touch screens can create a barrier for customers with limited visibility due to the challenge of navigating the system. Now, Virgin Atlantic is pioneering new technology, which will enable visually impaired customers to enjoy the full range of on-board entertainment via specially adapted iPads. Working with UK tech company Bluebox viation Systems, the innovative iPad-based platform was tested by representatives from Guide Dogs for the Blind includes audio descriptions, large type, and consistent layout and controls.

Virgin Atlantic and Bluebox worked closely with Guide Dogs for the Blind to assist with the development of the special kit and considered a number of impairments which it could benefit, including blindness partial vision and sensitivity to brightness. Representatives from the charity provided recommendations for the initial design and undertook a year of extensive system testing to ensure the technology met their needs.

Mark Anderson, Executive Vice President – Customer at Virgin Atlantic, commented; “Nearly thirty years ago, Virgin Atlantic was the first airline to offer seat back entertainment in all cabins, so it’s apt that we should be the first to ensure our entertainment is fully accessible across all flights. Working with Bluebox and Guide Dogs for the Blind we’ve been able to create a world first that ensures customers with sight loss can experience the full range of on-board entertainment including the latest blockbusters, TV shows and albums.”

John Welsman, Policy Business Partner for Travel and Transport for the charity Guide Dogs, said: “We know that something as simple as an in-flight entertainment system with voice overs and audio descriptions will help passengers with sight loss to enjoy flights just like anyone else on board. As someone with sight loss who flies quite often myself, I think it’ll be wonderful to access entertainment and information on Virgin planes without needing to ask for help. Not having to call for cabin crew, or disturb fellow passengers around me who might be sleeping, will be great. “The charity Guide Dogs works hard to make sure that people who are blind or partially sighted are not left out of life, and so we’re delighted that Virgin Atlantic is helping passengers with sight loss to be more independent on board their planes by providing accessible in-flight entertainment.”

David Brown, Business Development Director at Bluebox, commented; “Bluebox’s accessible inflight entertainment platform – aIFE™ – offers Virgin Atlantic the means to give visually impaired passengers access to the latest IFE content, and the independence and navigational ease-of-use they told us they wanted and needed from an IFE system. For such a complex development, we’re incredibly grateful to have had such willing and committed partners in both Virgin Atlantic and our testing group from Guide Dogs for the Blind.”

Improving its IFE offering is just the latest in a number of steps Virgin Atlantic is taking to change its overall customer experience for the visually impaired. The airline already offers familiarisation days, which include aircraft visits, allowing visitors to get used to the on-board systems before they begin their actual trip. Similarly, guide dogs who have not fully passed their training are not allowed to fly, so the airline allows familiarisation courses for them too, to get used to the aircraft environment.