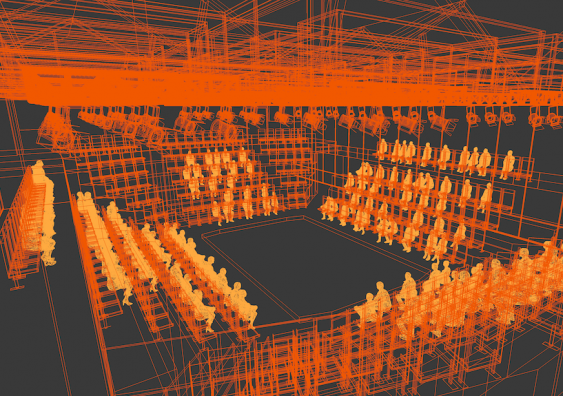 Virtual intelligent design is a world-first for operatic rehearsals

Scientia Professor Dennis Del Favero is leading a new Australian Research Council (ARC) Linkage Project that will transform Opera Australia’s rehearsal design. He is Chair Professor of Digital Innovation at UNSW Art & Design and Director of the iCinema Centre for Interactive Cinema Research. The three-year project has received $562,000 in the latest round of ARC Linkage Project grants.

“This project demonstrates the advantages of industry collaborating with researchers in the development of the latest digital technology to the practical quality of their creative decision-making,” Professor Del Favero says.

Opera Australia has the most advanced digital stage system in the world which, according to Professor Del Favero, is “why we’re working with them and why they approached us”.

“Because the design elements and infrastructure are developed separately, the individual designer and design teams never see the combined effect of all the performers and machinery working together until the rehearsal,” says Professor Del Favero.

“Rehearsals are among the most expensive parts of production for Opera Australia, involving the costs of the technicians, designers and performers. It’s of great value to them to be able to streamline that rehearsal process – to shorten it, but also to make the decision-making a lot more effective by virtually modelling all its components beforehand in an integrated manner underpinned by artificial intelligence (AI) that automatically analyses the modelling.”

Artistic Director of Opera Australia Lyndon Terracini AM says what is being proposed has not been achieved by any other opera company in the world and it presents many challenges.

FLAME University, the first University in India to launch…

SPbPU: Polytechnic University is among the best universities…

“However, if the research results are what we expect them to be, it will revolutionise how we make theatre and it will be the most significant development in theatre practice for more than half a century. It will mean we can present a number of operas on any given day, and we will be able to reduce our labour costs dramatically.

“In summary, the artistic results will be magnificent, but the savings made in labour and logistics will be just as important,” Mr Terracini says.

To reduce the time a physical rehearsal takes and to enhance decision-making, Professor Del Favero’s team of researchers will virtually simulate the components of the operatic production in a 3D environment – each component independently and then their combined interaction. This will be done will the AI system that will analyse the function and interaction of the component and provide real-time feedback to enhance its operation.

“By simulating all of that in 3D, we’re providing a very safe environment where they can test all the human and material components, make and refine decisions, and then undertake a full-scale physical rehearsal based on these outcomes.”

The virtual prototyping system is networked and accessible online across multiple platforms from laptops, head-mounted displays to a fully immersive 1:1 scale cinema accommodating up to 30 participants at any one time. It enables designers to work on their design component remotely, say via their laptops from the Opera Australia studios in Surry Hills or any other location.

Once they have worked up a draft design, they can upload it for 1:1 scale virtual rehearsal in the 360-degree 3D cinema located at UNSW Art & Design. They can then remotely access the cinema to test the design or physically work inside the cinema with groups of other designers to test each component along with its interaction with all the other components.

Inside the cinema they have full interactive control. For instance, they are able to move components by simply grabbing its virtual version with their hands, say an LED screen, and move it to another location on the stage. Or they can direct the avatar of a performer to enter from stage left rather than stage right, to see how this affects the dynamics of the choreography. Simultaneously the AI system will converse with the designers and advise on design improvements and functional issues that escaped their attention, such as unexpected collisions between the rotating LED screens and a performer.

“A virtual rehearsal in a 3D cinema is not only an exciting concept, it also allows the development of artistic collaboration to be fully realised and put into immediate practice. It also saves massive amounts of time in the theatre,” says Mr Terracini.

“This is the most exciting development in a lifetime.”

Amway Partners with TCS for Strategic IT Operations Transformation

FLAME University, the first University in India to launch the Taiwan Studies Project

iednewsdesk Dec 1, 2021
The representatives of Polytechnic university received letters of gratitude from the Committee on Interethnic…

SPbPU: Polytechnic University at the Forum of Employees of…

SPbPU: Polytechnic expert talks about the effective promotion of the…

SPbPU: Polytechnic University will be the first Russian university to…