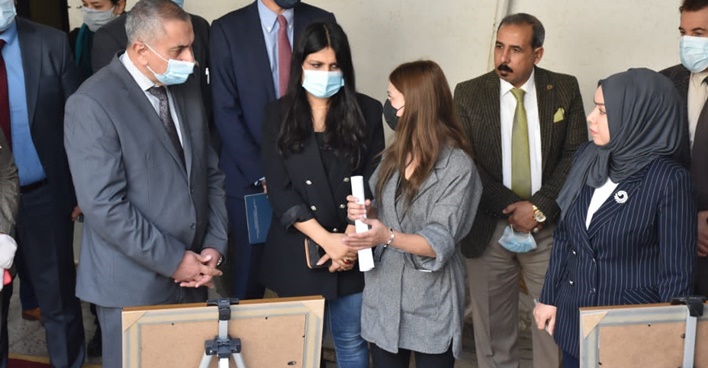 Virtual Reality technology used to teach about genocide in Iraq

UNESCO Iraq joined the rest of the world to commemorate this year’s International Day of Commemoration and Dignity of the Victims of the Crime of Genocide and of the Prevention of this Crime on 9 December with a workshop on using “Nobody’s Listening” Virtual Reality as a tool to further genocide education in Iraq.

The event took place at the University of Baghdad draw attention to the role of new technologies to educate about the genocidal campaign directed towards the Yazidis in Iraq. The event, which took place took place on the 72nd anniversary of the Genocide Convention, was the first event organised by Professor Salah Fleifel al-Jabri in his role as UNESCO Chair on Genocide Prevention Studies in the Islamic World, at the College of Arts.

In a speech, Mr. Paolo Fontani, UNESCO Representative to Iraq, highlighted the importance of strengthening a culture of genocide prevention and foster understanding of the warning signs of genocide to help young people become more aware of the processes that can lead societies to violence.

“UNESCO is committed to ensuring that the memory and the legacy of the victims of genocide is preserved through commemorative and cultural activities, and to supporting relevant pedagogies and educational tools in the field of genocide education.”

He added that modern technologies are increasingly being used in education to share ideas, collaborate and learn, and that virtual reality provided a novel opportunity to learn about this difficult past.

“Virtual reality is being widely used to provide experiential learning in all spheres of education and training. I am confident that this enhance learners of all ages’ understanding of past atrocities in such ways that they are able to develop attitudes of empathy, solidarity and respect for differences and diversity.”

Through immersive exhibition, including sculpture, painting and photography, participants of the workshop were able to develop their understanding the wider aspects of the genocide. Co-developed with Yazda, a global Yazidi NGO, the virtual and augmented reality technology aims to stimulate the public’s imagination and bring them closer to the human impact of genocide.

Ryan D’Souza, Executive Producer and Curator of the “Nobody’s Listening” Virtual Reality experience and art exhibition commented, “We need more education, more dialogue and stronger rule of law – including justice and reparations – otherwise communities will continue to be at risk of future atrocities. We are delighted that today’s workshop will investigate the impact of the VR experience in changing perceptions and behaviour towards the Yazidi community.”

Hala Safil, a genocide survivor, spoke at the workshop about the need to educate about the Yazidi genocide and Yazidi culture and religion in order to prevent future atrocities, recommending that the Nobody’s Listening VR experience is used to build educators’ capacity to teach about genocide.

Vian Darweesh, the Yazidi survivor Network coordinator, remarked, “It has been six years that the Yazidis were targeted by ISIS. Our men were killed, our women were captured, but there are still women missing and held in captivity. This Virtual Reality is a reflection of a real experience that we have lived through, so it is important that communities are educated and aware about the Yazidi people and culture.”

Another genocide survivor who participated in the workshop commented, “it was emotional, but it was positively emotional, that finally someone could listen to us and feel us.”

The event was organised in partnership with IOM-Iraq, who spoke about how this initiative is helping us to understand, but also help raise awareness of the suffering inflicted on the Yazidi community and Iraqi people. Programme coordinator Xavier Oleiro  commented, “One of the biggest tasks that is ahead of us is to help Yazidis to heal their hearts and their minds, to restore their dignity and their security by remembering what happened, so the atrocities are prevented from happening again.”

The International Day of Commemoration and Dignity of the Victims of the Crime of Genocide and of the Prevention of this Crime marks the anniversary of the 1948 Convention on the Prevention and Punishment of the Crime of Genocide, the first human rights treaty adopted by the General Assembly. The Genocide Convention signifies the international community’s commitment to “never again” and to pursuing justice following an act of genocide, providing the first international legal definition of “genocide”.