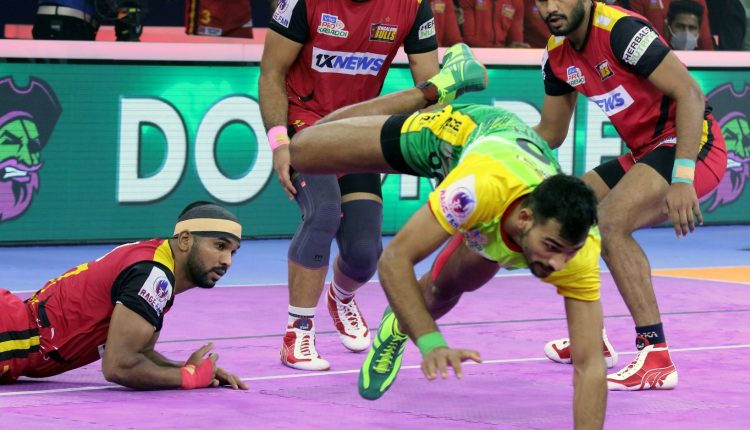 A collective performance from the entire team helped Patna Pirates make it 7 wins on the trot at the crucial stages of the tournament. The win also guaranteed them a first-place finish (league stages).

Mohammadreza Shadloui and Sunil scored 6 tackle points each for the Pirates. The Bulls have just 1 match remaining in the league and will now be dependent on other results to go their way to make it to the playoffs. They will however take some positives from secondary raider Chandran Ranjit’s performance against the Pirates (8 points).

The first 10 minutes of the match was an exhibition of Kabaddi skills as both teams opted for an aggressive approach. Bulls’ Pawan Sehrawat struggled to find his footing as the Pirates defenders pounced on him like hyenas on the prowl. At the other end, the Bulls were in no mood to let Patna run away with the match with a playoff spot at stake. But Sachin’s clever raids gave Patna a man-advantage closer to the 10th minute. But Bengaluru’s Saurabh Nandal and Chandran Ranjit produced two stunning Super Tackles to keep Bengaluru in the fight around the 12th minute of the match. Pirates’ left-corner Mohammadreza Shadloui then joined the party with a few trade-mark bone-crunching tackles.

Patna Pirates’ relentless pressure finally gave them an ALL OUT in the 16th minute. The first half ended 19-14 with the Pirates in the lead.

Shadloui picked his High 5 early in the second half with a tackle on Pawan Sehrawat as Patna continued to control the match. But the Bulls proved they were not just dependent on Pawan as Chandran Ranjit inspired a comeback. His raid points reduced Patna’s lead to just 2 points with 10 minutes on the clock.

Patna Pirates’ Sunil also picked his High 5 as their defenders led the fight against the Bulls. They continued to produce collective tackles to help Patna once again increase the lead to 5 points with 5 minutes to spare.But the momentum once again shifted hands as Pawan Sehrawat clinched a 3-point raid. That helped the Bulls clinch an important ALL OUT to level the scores at 32-32 with 3 minutes remaining.

But Patna Pirates showed why they are on top of the points table with two crucial moves in the last minute. Sachin got an important touch point on Jaideep and then in the next move the Pirates tackled Pawan Sehrawat before he could pick even a bonus point. That 2-point margin proved decisive as Patna went on to secure another win.