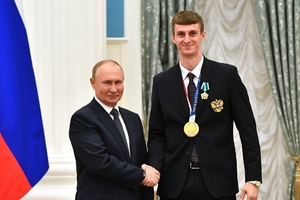 In the St. George Hall of the Grand Kremlin Palace, the head of state met with Russian athletes – champions and prize-winners of the Games of the XXXII Olympiad in Tokyo.
Before meeting with the athletes, Vladimir Putin presented state awards to the gold medalists of the Olympics.

Among the awardees is Vladislav Larin, who won a gold medal at the Tokyo Olympics. Vladislav Larin entered the history of Karelian taekwondo as the first Olympic champion.

Vladislav Larin is the new Olympic champion of our country, Honored Master of Sports of Russia in taekwondo, world champion in 2019. While still a student at the Institute of Physical Culture, Sports and Tourism of PetrSU, he received a ticket to the Tokyo Olympics. Now a PetrSU graduate Larin Vladislav is a three-time European taekwondo champion, a member of the Russian national taekwondo team, at the highest Olympic level he represented his native university, and the Republic of Karelia and Russia as a whole at the Summer Olympics in Tokyo.

Vladislav Larin defeated Macedonian Dejan Georgievski in the final of the tournament in the category over 80 kg with a score of 15: 9. The gold medal of a Petrozavodsk University graduate became the seventh for Russia at the Games in Japan and the second in taekwondo both at these competitions and in the history of the Olympics.

I would like to express my deep gratitude to your coaches, mentors who led you on a long, arduous path to the Olympic peaks, your family, of course, which now – when awarded with state awards – your teammates, relatives, friends, whose support helped you to move only forward – to the cherished, the most important Olympic pedestal for any athlete. Each medal you won at the XXXII Summer Olympics has its own big personal, human history, a long, selfless path to the top of the sport, and you have passed it in the most dignified way.

Your examples have tremendous inspiring power, prove the value of physical culture, sports, charge young people with the desire to be equal to you, to make a choice in favor of an active, healthy lifestyle.

Thank you for your work, for your loyalty to the ideals of the Olympic movement, I congratulate you on your brilliant achievements and well-deserved awards and, of course, I wish you new successes, new outstanding victories and records for the glory of Russia.