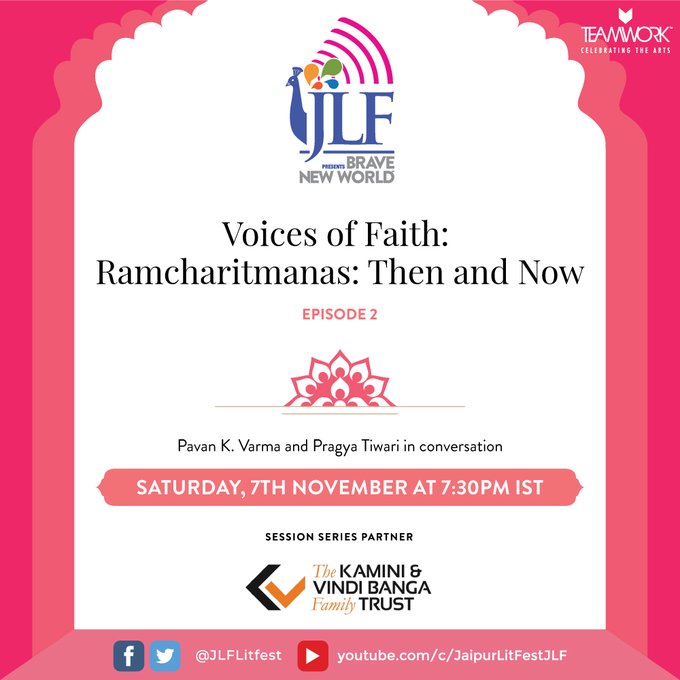 ‘Voices of Faith – Ramcharitmanas: Then and Now’, a JLF Brave New World series explores the classic’s infinite and universal wisdom

Tulsidas’s Ramcharitmanas is a lyrical outpouring of the greatest devotion to Lord Ram. Writer, former diplomat and politician Pavan K. Varma’s latest book, ‘The Greatest Ode to Lord Ram: Tulsidas’s Ramcharitmanas’, has attempted to deconstruct Hinduism by analysing the plurality that exists within its philosophical roots. Exploring the essence of the 16th-century epic poem, originally written in Awadhi by legendry Indian saint and poet Goswami Tulsidas, Teamwork Arts, the producer of the iconic Jaipur Literature Festival, presents a series titled ‘Voices of Faith – Ramcharitmanas: Then and Now’ as a part of the JLF Brave New World umbrella. The series has been presented by The Kamini & Vidhi Banga Family Trust.

Focusing on different aspects of the literary work, the series features, along with Varma, eminent speakers and experts on the topic, namely – bestselling author of 18 books, including Mistress of Spices, Sister of My Heart, Before We Visit the Goddess, Palace of Illusions, and Forest of Enchantments, Chitra Banerjee Divakaruni; author and widely-known scholar, Harish Trivedi; well-known journalist, Pragya Tiwari; noted Indian academic, food critic and historian, Pushpesh Pant; and American Indologist, Philip Lutgendorf. These speakers are in conversation with Pavan K. Varma and discuss the narrative of the Ramcharitmanas, unveiling the true expression of its verses.

The Ramcharitmanas is one of the greatest lyrical compositions in Indian literature. This literary work broke away from literary tradition and made Lord Ram more accessible and relatable to the layperson. The story of Lord Ram, however, is incomplete without referring to the strength, knowledge and perseverance of Goddess Sita and her central role within the narrative. In his recent work, Varma has selected some of the most inspiring stanzas that capture the very core of the original work. In a conversation, Varma and academic and author Chitra Banerjee Divakaruni discussed the various philosophical aspects of the Ramcharitmanas and the characters that shine through. Divakaruni’s novel The Forest of Enchantments is an evocative telling of the Goddess Sita. Her innate strength is a testament to the power of the female. In another session, Pushpesh Pant and Varma did a deep dive into the lyrical nuances of the Ramcharitmanas. Together, Pant and Varma discussed the poetics and philosophy of the Ramcharitmanas and its enduring literary value.

The ideas of the utopian society that Lord Ram strove for, referred to in the verses of the centuries-old literary work, has since then generated the notion of Ram Rajya, which has been described as the most ideal combination of governance and righteousness. Varma’s book is an ode to the great importance of wisdom over knowledge that shines through the entire text. In a conversation highlighting Lord Ram’s immense faith and belief in the concept of dharma, the author talked to eminent journalist Pragya Tiwari and discussed the foundations of Ram Rajya, what it signifies and its enduring place in Indian polity.

Academic and Indologist Philip Lutgendorf has worked extensively with the Ramcharitmanas and his definitive English translation, published by the Murty Classical Library of India, runs into seven volumes. Varma will be in conversation, in the series’ forthcoming session, with Lutgendorf and scholar, academic & translator Harish Trivedi, discussing the impact and outreach of this classic text, which has been hailed as ‘the living sum of Indian culture’.

The upcoming as well as the past sessions can be accessed via the #JLFLitfest social media pages on Facebook and YouTube.

Education on revamp mode in Meghalaya

Harvard, Stanford, and IIM alumni come together to establish the Kautilya school of Public Policy in Hyderabad