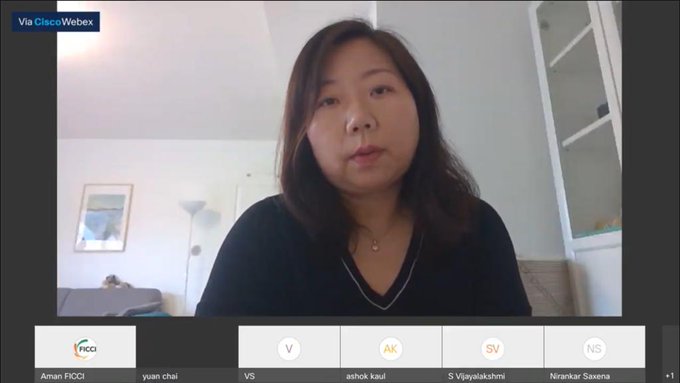 Addressing the webinar on ATA Carnet organized by FICCI, jointly with the Film & Television Producers Guild of India, highlighting the importance of ATA Carnet instrument for the Media & Entertainment sector, Ms Yuan said, WATAC under the aegis of the World Customs Organization (WCO) is working towards digitization of the carnet system and currently six countries, i.e., UK, Russia, Switzerland, USA, Belgium and China are undertaking an e-carnet pilot project and on success, it will be implemented in other member countries of the ATA chain.

Ms Yuan further stated, “ATA Carnet facilitates duty-free and tax-free temporary export/ import of goods into foreign countries. It eliminates posting financial guarantee and no additional registration in the country of departure is required.” She further explained that the ATA Carnet reduces the risk associated with carrying large sums of foreign currencies and eliminates the need for a temporary importation bond and a cash deposit of duties & taxes.

“We have established a 5-layer risk management control scheme in order to make sure that duties and taxes are safe and secured and the risks are under control,” added Ms Yuan.

UK regulator confirms that people should continue to receive…

UK: Sixteen colleges to benefit from next phase of fund to…

UK: Specialist job coaches to help young people onto the…

Mr PS Pruthi, Senior Consultant, FICCI & Former Member, Customs Excise & Service Tax Appellate Tribunal (CESTAT), said, “ATA-Carnet is also called the highway to easy import for its ease of process. The whole basis of the ATA is a single document that can be used for temporary import and export of goods.”

He also mentioned that in the past few years there have been various initiatives by FICCI such as the adoption of Carnet for various sectors such as press, TV & media, sporting events, film shootings as well as professional equipment. Mr Pruthi also touched on the expansion of customs ports authorized for ATA Carnet transactions and India-Taiwan Carnet protocol for free movement of exhibition goods between both countries. “India was not a very temporary- import friendly country but FICCI’s initiatives on Carnet have been successful in transforming the country into one,” he added.

Mr Ashok Kaul, Former CEO, RK Studio said, “If difficulties of temporary import are eased by ATA-Carnet, it will help filmmakers to go all over the world and shoot, and it will only add to uniting the world creativity.”

ATA Carnet is the simplest method of exporting goods on a temporary basis. Carnets are replacing normal Customs documentation enabling fast trouble-free importation into member countries without having to pay duty/ tax. The system gives several advantages to businessmen seeking new opportunities on foreign markets. It can benefit Business travelers/sales executives, Fair Exhibitors, Film and TV crews, Artists, Engineers, Educationalists, Entertainers, Sports teams and many more during their overseas trips. The key benefit is that it can be used for multiple trips throughout the period of its one-year validity. It allows a reduction of delays and standardization of procedures that are vital in today’s economic world. In addition, it significantly cut the amount of customs paperwork.

FICCI has been functioning as sole ‘National Issuing and Guaranteeing Association’ (NIGA) for the operations of ATA Carnet system in India.

UK: Sixteen colleges to benefit from next phase of fund to transform facilities