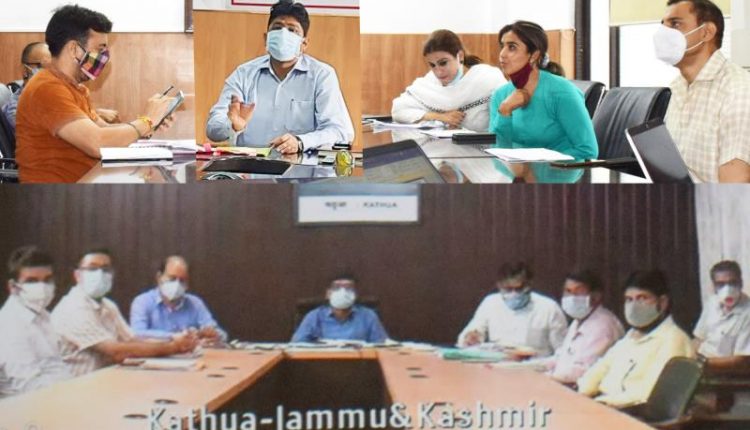 JAMMU : On the directions of office of the Lieutenant Governor, the Jammu and Kashmir Sports Council is all set to establish a Water Sports Centre at Basholi for starting water sports activities in the Ranjit Sagar Reservoir.

In this regard, Divisional Commissioner Jammu, Dr Raghav Langer chaired a meeting to discuss the final modalities of development of the necessary infrastructure for holding national and international competitions, besides attracting high end tourists to the picturesque surroundings of Basholi area.

The Secretary Sports Council gave a detailed powerpoint presentation and apprised the Div Com about the facilities proposed to be developed in Basoli for starting the water sports activities.

The Secretary informed that a joint visit was conducted by Sports Council, Youth Services & Sports and team of Revenue of Kathua district administration for spot inspection and a patch of land measuring 07 Kanal and 09 Marlas was identified for the establishment of the centre. She said after finalizing the site and inviting tenders, J&K Sports Council has allotted the project to L1 at an estimated cost of Rs 3 Crore and the execution would be started soon.

Responding to certain issues raised by the Secretary, the Div Com directed the Deputy Commissioner Kathua to immediately transfer the identified land in favour of J&K Sports Council to facilitate the start of work on the Water Sports Centre building without delay.

After the establishment of the centre, it will become the most sought after place for holding national and international level water sports competitions, the meeting was told.

The Div Com instructed the Secretary Sports Council to start with holding water sports activities at the already existing Jetty Point developed by Bani Basoli Development Authority as the outsourced boats are regularly operating in that area.

He also instructed the Secretary Sports Council to hold a meeting with the Youth Services & Sports, Forest and Tourism departments to review the scope of ongoing activities and adopt a holistic and unified approach by all the concerned departments for promotion of water sports in the area.

The DC Kathua was directed to issue the NOCs, if required for the project, while PWD officials were asked to assess the approach roads leading to the identified spots and take necessary action.

The Div Com said Development of new attractions for promotion of tourism is one of the priority sectors of the UT Government. He said with the start of water sports in Ranjit Sagar Reservoir area, Basoli & adjoining area will emerge as a tourist hub.

The project had been sanctioned under PMDP around three years back but could not take off due to various reasons; and now only after the directions from the office of LG; project activities have been expedited.

iednewsdesk Jan 28, 2022
Researchers analyzed chipped stone tips made by a population that lived in Brazil between 11,000 and 5,000 years…