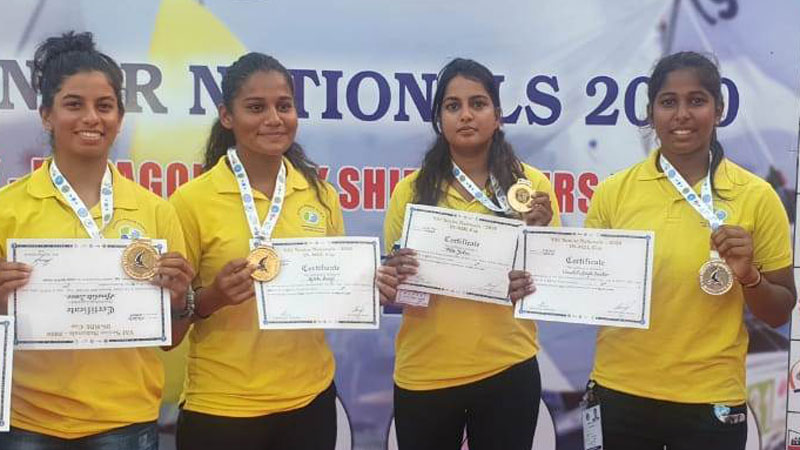 Expressing happiness over the success achieved by the Academy’s players in the Senior National Sailing Championship, State Sports and Youth Welfare Minister Smt. Yashodhara Raje Scindia congratulated the winners. Lauding the brilliant performance of the players she said that this is the first time since the Corona period when female players of the Water Sports Sailing Academy gave such a brilliant demonstration of their talent and made Madhya Pradesh proud by winning medals. We are proud of our female players.

The Academy’s star player Harshita Tomar bagged the gold medal for Madhya Pradesh while performing brilliantly in the laser radial event of the Senior National Sailing Championship organized by the Yachting Association of India from November 21 to 27, 2020 at the Indian Naval Watermanship Training Centre Mumbai. In the 49er Fx event of the competition, Academy players Ekta Yadav and Ritika Dangi bagged gold medal while the pair of Sheetal Verma and Vanshika Parihar bagged a silver medal for Madhya Pradesh. Whereas in the 470 Mixed Class Event, Academy player Shraddha Verma and player from Morena Ravindra Sharma won a gold medal and the pair of Uma Chauhan and former Academy player Sonu Jatav of Dindori won silver for Madhya Pradesh.

It may be noted that seven female players of M.P. Water Sports Academy took part and all seven of them won medals by performing brilliantly in the Senior National Sailing Championship.

Brought glory to the state

Appreciating the display of talent of the players, Director Sports and Youth Welfare Shri Pawan Kumar Jain said that in the first Senior National Sailing Championship after the Corona period, the female players of Water Sports Academy brought glory to the state by winning five medals including three gold and two silver.

The players took part in the championship under the guidance of Arjuna Awardee, Chief Instructor of Water Sports Sailing Academy Shri J.L Yadav and Assistant Instructor Shri Anil Sharma and bagged the medals.